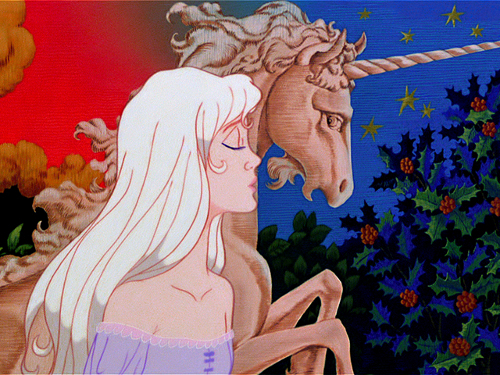 Engaging fantasy author Peter S. Beagle in conversation is a remarkably lively experience, and fan, friend and/or interviewer should prepare to be surprised. I'm all set for unicorns and werewolves when Mr. Beagle suddenly launches into political observations -- particularly (and genially) regarding individuals who swoop from one extreme to its polar opposite. The author, with a nod to his 1930s Communist forebears, lets fly an amusing history lesson:

"It's rather like the joke attributed to Georges Clemenceau, the former Prime Minister of France," laughs Mr. Beagle, "when his political enemies couldn't wait to tell him that his son had just joined the Communist Party: 'My son is 22 years old. If he had not become a Communist at 22, I would have disowned him. If he is still a Communist at 30, I will do it then.'" 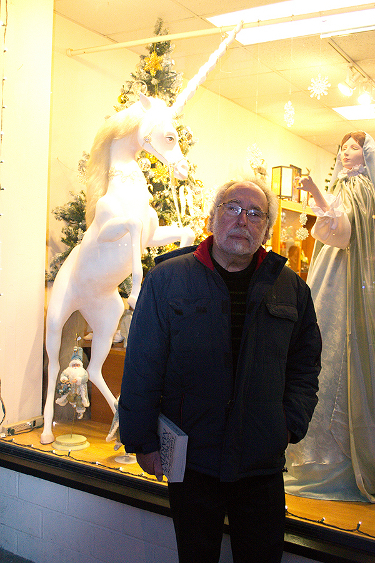 Peter Beagle bursts with such quotes, appraisals, and reflections, which suggests why his fantasy novels and stories are never the stuff of dime-store magic wands, but rather modern classics, oozing poetry and insight. The recent, massive resurgence of fantasy entertainment has thrust the pioneering author into the limelight anew, and with Connor Cochran of Conlan Press, he's touring through 2015 with a beautifully restored 2K digital print of 1982's The Last Unicorn, including several stops this month (links below). 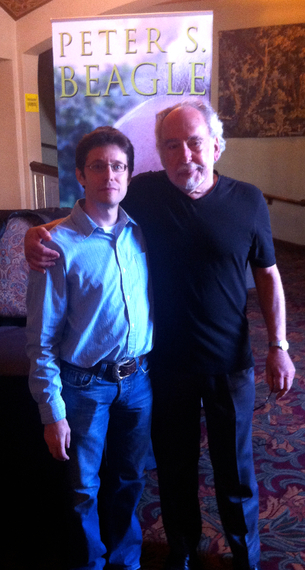 On Saturday the 25th of January, Mr. Beagle and George R. R. Martin (Game of Thrones) will interview each other in a live Fantasy Summit at the Jean Cocteau Cinema in Santa Fe, New Mexico. Meanwhile, as the Last Unicorn tour packs cinema after cinema as an almost unprecedented movie-roadshow phenomenon, Mr. Beagle is developing several film and television projects with producers Jeff Beard and Paul Todisco, including big plans for Peter's novel The Innkeeper's Song (adapted by Mr. Todisco), as well as his young adult novel I'm Afraid You've Got Dragons. And The Last Unicorn, beloved for decades as a novel and an animated film, is now under development as a Broadway-bound musical. 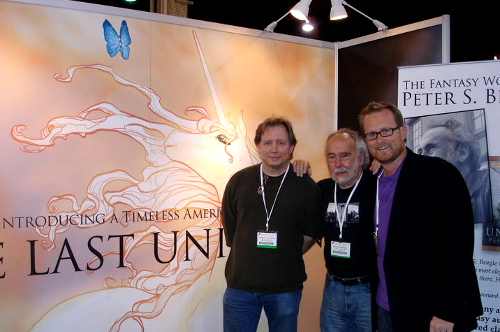 For such a focused and prolific guy -- in addition to revising his classics, many new books are set to pop -- Mr. Beagle is at ease with seemingly any topic, as I discover after a Last Unicorn screening, when our talk turns to 1970s French folksingers, and he effortlessly riffs on Maxime Le Forestier. (Who groks that?!) During our interview proper, I cite his terrific novel Tamsin, and ask how he delivers characters' voices, including girls', with such authenticity and ease.

"My stock answer when people ask me, 'How are you able to get into the head of a 13-year-old girl?' I usually say, 'Well, you know, I've got daughters.' But that wasn't it. I've often said that nobody forgets 13 -- male, female, it's not gender-specific. In your life, the crossroads -- the girl herself says, 'You don't know who you are.' You think that you're dreaming your existence when you're a kid, for your friends, for the opinions of your friends." 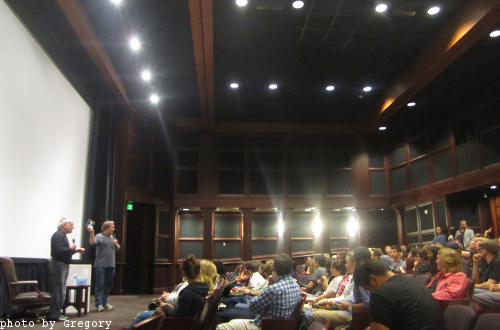 Peter and Connor rock the USC School of Cinematic Arts

The author ponders: "There's so much that I get praised for doing, that I'm not usually aware of, consciously. My best example is making the mistake of going to a scholarly convention: the International Association for the Fantastic in the Arts (IAFA). I went to a seminar on my own work. I'm not joking when I say that I very nearly fell asleep! But a woman whom I knew read a paper on a novel that I sometimes think of as the runt of my litter -- The Folk of the Air -- and she commented on how clever it was of me to name a Greek woman Athanasia Sioris. Apparently, Athanasia -- or Sia, for short -- means 'immortal beauty.' Now how about that, for an old goddess?

"Then I had to get up, and say that the name came to mind because I had a big crush on a Greek girl in high school -- named Sia; everybody called her Sia -- and it was the only Greek name that came into my head! And that's more common than not."

Mixing metaphors here: Peter Beagle is so good (and so modest) that when he shows you the man behind the curtain, you still believe in the wizard! The boy-author who at 19 turned out his first novel, A Fine and Private Place, on a Hermes portable typewriter (kids: Wiki "typewriter") jokingly calls himself a "techno-idiot" in the present day. It's not about the machinery, but the method. He elaborates via perhaps his most famous work:

"When I was writing The Last Unicorn, in the first place, it never occurred to me that Prince Lír would inevitably become King Lír (or: Lear). I wasn't even thinking of that! In the second place -- I'd completely forgotten that Llŷr is the name of one of the greatest of Celtic sea gods. That -- and again, when I named the unicorn's human incarnation Amalthea, I wasn't thinking of the fact that Amalthea was the name of a goat who raised and protected the god Zeus when his mother hid him, as a baby, from his father who wanted to eat him. Amalthea nursed him, protected him, played with him -- and as he grew older, began to come into his god's strength, when they were sporting, wrestling one day -- he broke off one of her horns: he was very apologetic, and turned the broken horn into the cornucopia, the horn of plenty: wonderful goodies! I got the real sense that Amalthea became the first unicorn! And I can think of that now -- but I swear I wasn't consciously thinking of it at the time." 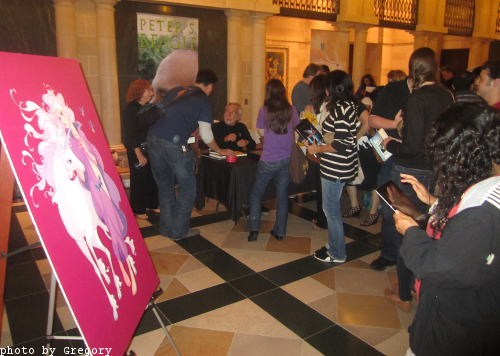 Speaking of The Last Unicorn, I have to name-drop and mention that I interviewed legendary performer Christopher Lee (for Peter Jackson's The Lord of the Rings, in 2001) -- and of course Mr. Lee voices King Haggard in the adaptation of The Last Unicorn.

"Oh, wow!" enthuses Mr. Beagle. "I spent a lot of time with Christopher when the movie was dubbed in German. I met him when it was first being recorded in English. But I got to know him better when we were in Germany, in Munich, in 1983 -- and he had agreed to do King Haggard over again in German, just for expenses -- and because, he said grandly when we were on Austrian television together, 'Let's face this: It's the closest they'll ever let me get to doing King Lear.' And my jaw just dropped. The camera was on Christopher, then it swung toward me, to catch my reaction -- and he looked across at me, and winked.

"The thing I always remembered was that somehow, the guy who got this film made -- Michael Walker, the associate producer -- and I, found our way out to Dachau -- which is outside Munich. I don't know how we did it, because neither of us speaks German. We had to take a subway to get there. But we did. And we wandered around there much of one day, and it became more and more silent: quieter and quieter. And so, when we got back to the hotel where the cast was staying, we weren't talking at all. The first person we met, when we walked into the hotel, was Christopher. He took one look at us, and said, 'You've been to Dachau.' And we nodded. And he came closer, and looked down at us -- six-foot-five -- and said, 'Still smells, doesn't it?'

"I found out he had been a British soldier, at the liberation of Dachau -- and was kept on there, because he spoke German and could interrogate prisoners. And the thing he always remembered, the very first thing, was the smell of death. And yeah, it was still there, 40 years later. Very interesting man." 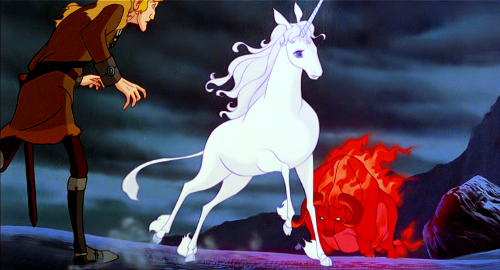 I praise Christopher Lee as one of the all-time greats of entertainment.

"Oh, at the recording," adds Mr. Beagle, "he had a copy of the book, with lines of dialogue that he did not want taken out under any circumstances, all underlined heavily. And when we met, he had just recorded Haggard's speech about the first time he saw unicorns. We were introduced, and he realized I had written the book, and he asked, 'Did I do it properly? We're right here in the studio -- I could always do it again.' 'No, no -- you did it perfectly.' Literature matters as much to Christopher as getting the lines right does." He adds of Mr. Lee: "On the one hand, he's 91 and fragile, and had to be spliced into his scene in The Hobbit, because he just couldn't make the trip to New Zealand anymore. And on the other hand, I believe he's just made his second recording with a heavy metal group!"

On the subject of "rock stars," I mention that bookish Mr. Beagle seems to be touring like one. Reveals Connor Cochran, tour manager and all-around pop-culture aficionado: "Fans discovered The Last Unicorn either on video or on cable, and they love it to death, and the chance to see it in a theatre stirs them deeply." He praises Peter directly: "Your work brings out the best in people -- and they bring it to the table. It's really amazing to watch." 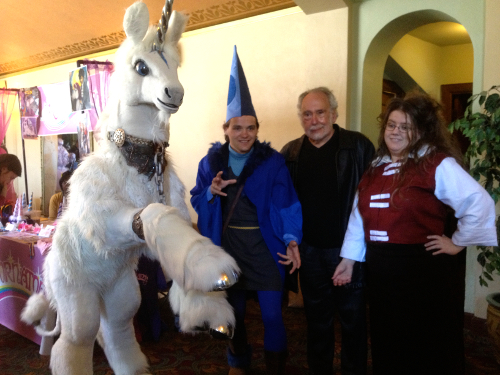 Peter's good at this stuff. He wryly divulges:

"I remember being a guest at a convention in Pittsburgh. There was a limousine waiting to pick me up -- the limo was about three blocks long: the driver really did look as though he was in some other ZIP code from me -- another time zone. There was a bar in the back -- I was never in a limousine with a bar in the back. I sat in the back and I investigated the bar. There were people waiting, when the limousine pulled up -- actually waiting on the sidewalk -- to see me emerge: to pour myself out of the limo! There was a suite upstairs -- not just three rooms, but three bathrooms, and three television sets, and I remember thinking: 'Not only do I feel like a rock star -- but I feel like it's practically my duty to throw one of those TV sets out of a window. Except I can't lift them! I guess I'll call somebody to help me throw them out!'

So, I ask knowingly, the author has a Keith Moon side?

"Yes," he chuckles, playing along. "I know what's expected."

(For the record, and in case anybody missed the winking: Peter Beagle does not trash hotel rooms.) 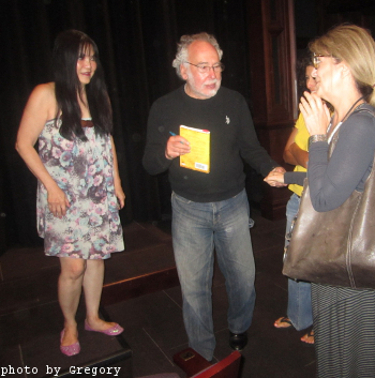 Peter is well appreciated for his gifts.

In closing, a quote for a quote, this one from Blaise Pascal:

"A man does not show his greatness by being at one extremity, but rather by touching both at once."

George R.R. Martin Books Game of Thrones The Lord Of The Rings The Hobbit