For The Painted Word [Viva Editions, $16.95], my second book of word origins, I needed to update my philexicon (to coin a word from the Greek philo, love, and lexicon, dictionary), my collection of lovable words--or should I say words I've come to love? I've riffled the pages of scores of old dictionaries and ransacked my father's old army trunks, which now contain hundreds of my journals and notebooks. More than once during my restocking I've thought of the startling line in J. M. Barrie's Peter Pan, where Captain Hook is described: "The man isn't wholly evil; he has a thesaurus in his cabin." Recently, I felt even more vindicated about my ardent belief in the beauty of word books when I heard the deadpan comedian Stephen Wright say on late-night television, "I was reading the dictionary. I thought it was a poem about everything." Neither Dr. Johnson, nor Pablo Neruda, nor Mary Oliver could have said it better. In other words (and there are always other words), libraries, collections, and lists do not alone make for exciting books about words, but finding the poetry lurking in them just might. Out of a million or so English words (at last count), only a relatively few appear in The Painted Word. Selections need to be made; standards set; wisdom winnowed. For me, the standard was the old standby, the frisson, the shiver down the spine that Vladimir Nabokov described as the recognition of a deep truth. If a word provides that telltale shiver in me, I'm confident other people will feel the excitement as well.

Contrary to erroneous belief, the words needn't be sesquipedalian, although it can be fun to learn a few "foot-and-a-half long" ones. It's entertaining to know that cruciverbalist is someone who loves to do crossword puzzles, and that lexicographolotary is the worship of dictionaries, a smattering of neologisms, such as smirt, a smirky combination of smoke and flirt, describing what happens on the sidewalk outside a nonsmoking restaurant, reminds us that language constantly reinvents itself.

I have also come to love what the linguist Charles Mackay described as the "lost beauties," of our mother tongue, archaic words worthy of revival, such as oubliette, a forgotten place, hwyl, a sudden outburst of eloquence, or skirl, to shriek like a bagpipe. The words we tend to embrace possess the sublime quality that Italian painters call luce di sotto, the light below. For instance, if we gaze deeply at the deceptively simple opportunity, we have a chance to see hidden beauty shining from below, which is the Roman god Portunus, patron of harbors, reminding us that communication is like sailing into a strange and distant port.

Together, old and new words can be prismatic in the way they refract or disperse or color whatever is viewed through them. That's why we marvel at them. Not because they brandish our erudition, but because they celebrate the choices that await us when we dip our brush onto our brilliant palette of language: 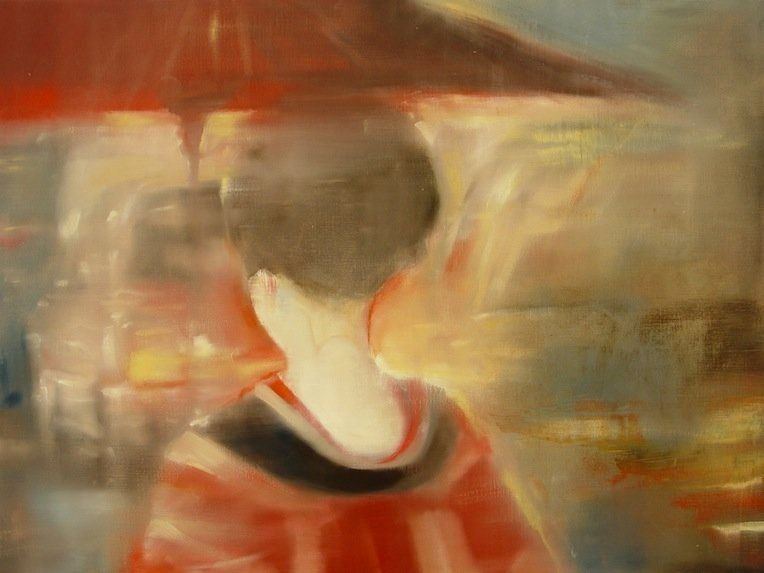 1 / 9
Aesthetics
<strong>The Word: Aesthetics</strong> <em>The study of perception of beauty and good taste. </em> According to the Oxford Dictionary of English, aesthetics is a nuanced appreciation of the beautiful. Aesthetics is also a branch of philosophy, a critical study of art that studies the way people judge the beautiful, art, and good taste. Depth psychologist James Hillman elucidated an aspect of the word: “The activity of perception or sensation in Greek is aesthesis,” he writes in Blue Fire, “which means at root ‘taking in’ as in breathing in the beauty of the world <strong>The Painting: Red in Rain </strong> In traditional Japanese culture the back of a woman’s neck is a deeply sensual site. My painting focuses on this fragile moment of beauty in the midst of an urban night.
Gregg Chadwick, courtesy of the Sandra Lee Gallery, San Francisco