Today in fact or fiction: BeautifulPeople.com, a dating website so vain it probably thinks this article's about it (and it is!), was briefly invaded by 30,000 "ugly" people who were granted membership thanks to a Shrek virus, likely planted by a reject.

Typically, BeautifulPeople.com hopefuls submit photographs to the site, which are then voted on by its 700,000 existing members. However, Greg Hodge, managing director of BeautifulPeople.com, said in a press release, "We got suspicious when tens of thousands of new members were accepted over a six-week period, many of whom were no oil painting." The unattractive additions (including 11,924 Americans) were cast off the "island," as Hodge calls it, and a hotline was set up to handle any hurt feelings.

Hodge explained to The Huffington Post, "Communities need to be exclusive to serve the purpose of the community. Exclusion is prevalent all through society. Look at Mensa and the national football team; all go through a selection process, some are accepted some are not. BeautifulPeople is no different aside from the fact that our process is democratic. There are some sites out there where you have to be a certain religion or color. BeautifulPeople is open to every race, color, creed and religion and represents every ethnicity, the proviso being our members find you beautiful."

He added, "If Mensa's database was mistakenly flooded with 30,000 dummies, they would not start putting out easier IQ tests!"

So what makes for a perfect BeautifulPeople.com member? Hodge told us, "Men will vote on women based solely on how they look...surprise, surprise. Women look at the bigger overall picture; yes, the men have to be attractive but they also have to write a reasonably articulate profile description, show a little character or sense of humor. A high income also helps as does a picture showing a good lifestyle."

We were pretty wary of this too-good-to-be-true scoop, so BeautifulPeople put us in touch with Asia, 39, who remarked to HuffPost, "Because looks are important to me in a partner, I want to belong to a website where every profile I search through is attractive. "

When asked what message she had for those who were rejected, she said, " Bye bye! No, seriously, I would say don't take it too hard. I'm a makeup artist working in the beauty business in L.A! I see rejection all the time. Everyone has their strengths. You have to pick yourself up and get on with real life."

One of the women trying to do so is Kate, 32, also from L.A. (Full disclosure: we received her name from BeautifulPeople's PR, but she sounded genuinely upset.) Her friends had encouraged her to join the site for some time and she was let through around May 19 or 20, thanks to the Shrek virus. She told HuffPost that her stint as a member "was fun. I made some friends in the forum and got a few nice messages. And suddenly I received an e-mail reading, 'Sorry to inform you, you're not beautiful enough,' with a support number to call."

Kate said she called the hotline and the woman gave her tips about how to rejoin, like what types of pictures to post and "sometimes a little sex appeal doesn't hurt."

Although she said the experience was humiliating and definitely a blow to her ego, Kate might try to rejoin in a couple of weeks: "I'd like to be on the site. I work a lot and I don't get out and about meeting people too often, so I think it would be good."

She did admit, "BeautifulPeople is kind of silly and shallow. But instead of just joining Match.com or eHarmony, at least you know all of the people are going to be generally attractive."

And that's what matters most. 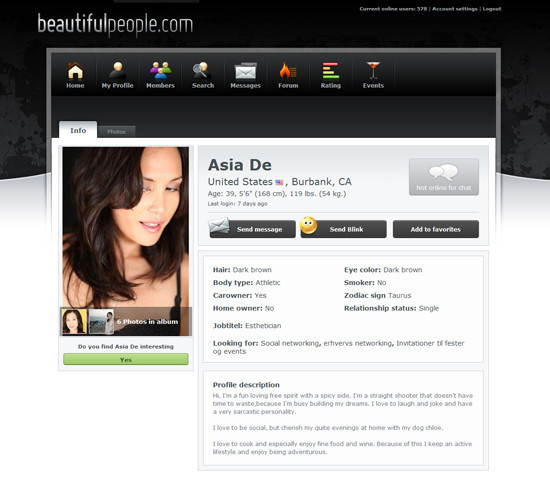