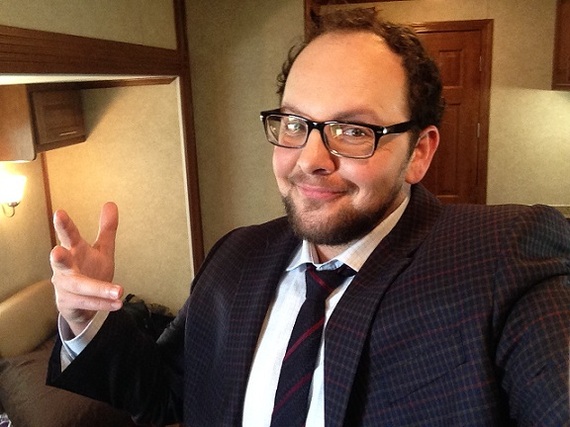 We tackled some heavy and fun stuff in Part I of my interview with Austin Basis.

YOU worked as a bouncer in your early acting days? Haha! This I gotta hear. Spill the beans.

That sounded like a chuckle at the thought of me being a bouncer...?! Do you think I'd be a bad bouncer?! Well, you'd be right. I was horrible. I was heavier than I am now and didn't wear glasses when I worked, but I still wasn't the most intimidating of people. Despite being in my late 20s, it was especially difficult rejecting fake ID's, since I looked quite underage myself at the time. Luckily, there was a team of about six of us and there were never any scraps I had to break up... Wouldn't want to mess up this beautiful face! I was also recognized a few times from my work on Law & Order: Criminal Intent -- which was awkward, but cool.

You're the winner of three consecutive People's Choice Awards. Who nominates you for that award and where were you each time you found out you won. Who was the first person you told?

The People's Choice Awards are voted for by fans. And since we have the most loyal, passionate, rabid and dedicated fans in the world -- affectionately known as the Beasties -- we've been nominated every year we've been on the air. They also win us the awards by voting day and night, on every device they have at their disposal. The first time -- I found out early, when I was out to dinner in Toronto with my wife and Nina. Production was shut down the next day, so Jay and Kristin could fly on a charter jet to LA to attend the show and accept the award and then fly back to Toronto to continue filming the following day! We found out we won by a whopping 10 million votes, which was quite unbelievable! The second and third time I found out live with the fans, checking the PCA website because it wasn't announced on the show. It was equally exciting and flattering, but nothing beats that first time! All three times we won, I told my parents and brother first -- they're my biggest fans.

Which do you enjoy viewing more? TV, film or theater? Why?

All have their unique allure. Lately, I've enjoyed watching TV the most. You get to do it in the comforts of your own home and on your own time. But more importantly, the arc of the characters and the story are played out over weeks, months or even years. The fictional worlds get to be fully excavated for every drop of drama or comedy. With theatre or film, it's over in two to three hours. I do still enjoy the escape that going to the movies provides. I've always loved the magic and the size of the screen and the full popcorn-filled experience that a movie provides (Milk Duds and Whoppers are optional). And I rarely go, but the energy of an evening at the theatre is unmatched in my eyes. You can't go every night (and frankly I can't afford to go every night), but when I do, and the play is good, you can feel the communal energy of the audience and actors alike, having shared a moment in time together, knowing that we can never get those three hours back, but that the time was not wasted. It's special and will hopefully remain that way. Live theatre will hopefully never be obsolete.

What do you think about the Mets this year? What's the best memory you have of the Mets?

I got my fingers crossed for a Mets-Blue Jays World Series, so I could go to some games! (I'm actually watching the game online as I type! They have a huge series with the Nationals, who are in second place.) I have MANY Mets memories: I was at the Todd Pratt home run game against the Diamondbacks; I was at the first game after 9/11 when Piazza hit a go-ahead homer against the Braves; I was at the last game at Shea Stadium... But the fondest memory I have is with my dad and my brother when the Mets won the World Series in 1986. Specifically, Game 6 of the World Series. I remember sitting in my kitchen by myself when the Mets came up to bat for "last licks" -- watching on a little black-and-white TV. My dad and brother were upstairs watching on the bigger, color TV -- but I had to be alone. They were down two runs, after all. I prayed and rooted and crossed my fingers with every at-bat. With two outs and the game on the line, my idol Gary Carter came up to the plate. My biggest fear was that he would make the last out and the Mets would lose the Series. He toughed out a single and started one of the most famous two-out rallies in baseball history. The Mets came back from two runs down, with two outs and no runners on base, to win and force a Game 7. They ultimately won the 1986 World Series, and my dad woke us up the next morning, not to go to school, but to take us to the ticker tape parade in Manhattan! It was awesome. I got separated from them and thought I'd be lost forever -- but it was still awesome!

Please be sure to read Part I of my interview with Austin Basis!