If you are a parent of a tween, stop right now and take this pop quiz.

There's only one question.

Are you ready for it?

a) No freaking way #inserteyeroll

If you answered (a), um... you're wrong. And I'm sorry to hear about that rock you just crawled out from under.

If you answered (b), congrats! You just earned 10 Insta points! And I so just made that up! Go ahead and pat yourself on the back, but your job is far from over. Because letting your child have an Insta (you knew they called it that, right?) without teaching them how to use it properly is like buying your kid a car without teaching them how to drive.

Or some other metaphor that's a little less lame. Still. The point I'm trying to make here is an important one so just bear with me, k?

So... Are you on Instagram? Do you follow your child to see what he or she is doing? Is their account set to "private" with geotagging turned off? Have you instructed your children not to accept follower invites from anyone they don't know? And to never, ever, ever give out any personal information like address, location or phone number? Like, ever?

But those were only the starter questions. Now take this next set out for a spin:

Are you pissed because I said at the beginning that there would only be one question?

You have a tween now. Get used to it.

So, have you told them yet how they should never post a picture that will hurt, embarrass or make someone feel left out? Explained to them -- really sat down and explained -- that any picture they post on Instagram is out there forever? And how that cute bikini pic they posted on vacay is just one screenshot away from landing in front of the wrong, creepy set of eyes?

Sad and hard to talk about, but true nonetheless.

So, did you tell them?

If you're anything like me, your answer falls somewhere between um, I think I did and well... kind of, sort of.

And that's not enough.

Did you know that there are beauty pageants on Instagram?

Well then you may want to sit down.

Because you know who the participants in these pageants are?

See, right now, as I sit here typing this, there is a tween girl with an iPhone somewhere making a grid out of four pictures of her besties using Instacollage or Mixel or whatever cool new app is making the rounds this week (omg Juxtaposer is sooooo amaze!)

When she's finished, she will post that grid on Instagram, and then write something along the lines of: BEAUTY CONTEST! VOTE SOMEONE OUT!

Did you just throw up in your mouth a little? I know I did when this whole thing blew up here on the Main Line over the weekend.

And I'll get to that in a minute.

But wait. That's not even the worst part. Because what happens next is this: People will actually vote for who they think is the least attractive in the comments, and whichever girl's name is written the most will be awarded a big fat X drawn across her face.

Of course you don't, but I'm going to anyway.

Whichever girl's name is written the most will be awarded with a big fat X drawn across her face.

Then the question will be repeated two more times, until there is only one gorgeous X-free girl left standing, the fairest of them all!

And you thought you had it tough in middle school because no one had invented Japanese hair straightening yet.

But don't hate the players. They're just kids.

And don't hate the game. Instagram was designed to be an online photo-sharing app that let users pimp-out their pics with cool filters and then share them.

We hate the coaches.

Because we are the coaches.

And we are failing our children by not giving them the tools they need to properly navigate this scary new world, and by not monitoring their interactions in this world closely enough once we do.

I had heard about the beauty pageants from a friend in New York a few months ago. But I didn't realize it was going on in my own town until late Saturday night, when, after five days of being on vacay in Mexico, I finally got in bed with my iPhone and signed onto my daughter's account to see what was going on.

Because part of the deal I have with my daughter is that until she turns 13, I can access her account any time. And if there are any followers, posts, comments or people she is following that I think are inappropriate, she will delete them, no questions asked. True story, except for the "no questions asked" part. Because she usually does have questions and/or arguments, but I am her mom and I said so.

So I started scrolling down her news feed.

And that's when I saw them.

About a half dozen of them.

And there, smiling out from one of the squares, was my kid.

But when I asked her about it the next day, she said she knew someone had put her picture in a contest, but that she didn't really care.

Then again, she hadn't been voted out yet.

There were other girls who weren't so lucky. And they were devastated, which is a ridiculous understatement, to say the least.

My first instinct was to block all the girls who had posted the grids from my daughter's account.

These girls were friends of my daughter's who had been in my car, at my parties, in my house. They liked to dance, and sing camp songs and bake brownies. They weren't Heathers. Or Reginas. Or even Monas. And if you don't know who Mona is, you need to go watch an ep of PLL like, now.

These were good, sweet, funny girls who I knew and who I liked.

Yes, what they were doing was wrong.

But how could I blame them when they were playing a game they had never been given the rules to? My own daughter waved the grids off as all in good fun until I actually explained to her what made them so offensive and vile. In the wake of events like what took place in Steubenville, it's becoming more important than ever for us to empower our kids with the tools they need to decipher right from wrong -- both online and IRL.

And so instead of banishing the girls, I did this: 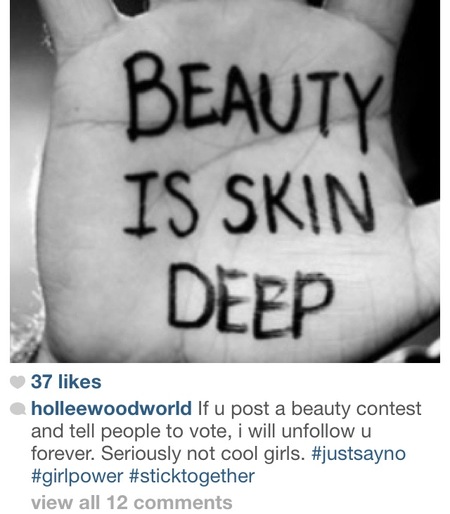 At first, nothing much happened.

But then I noticed that the beauty grids were slowly starting to disappear from my daughter's news feed. And in their place were things like this: 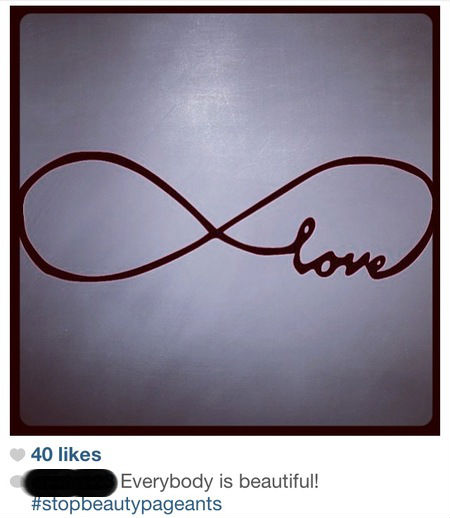 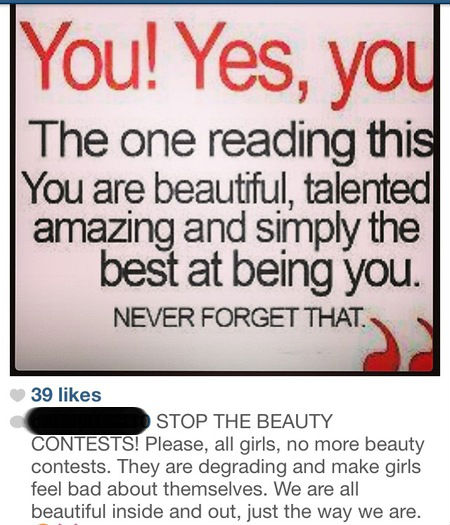 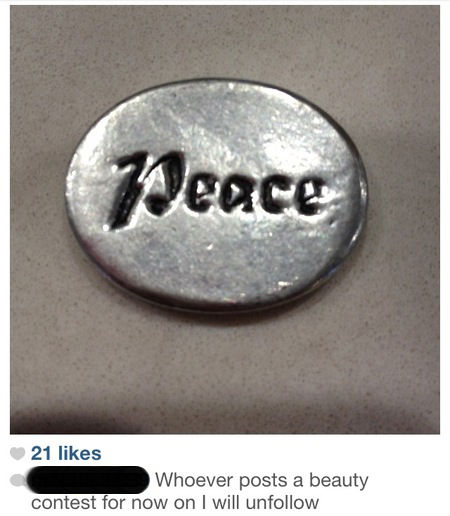 Slowly but surely, this little posse of fourth and fifth grade girls -- who had just spent hours feeling bad about themselves -- picked themselves up and took to Instagram to post inspirational messages of their own.

Did you just get chills?

I know I did. Because if this is not just the most amazing show of tween girl power, then I don't know what is.

Clearly, when it comes to social media, a little guidance goes a long way.

Which is why it's time for us to take our collective blinders off and really pay attention. Because the minute we give our kids an iPhone or iPod or any other gadget that puts technology quite literally in the palms of their hands, we become responsible for whatever happens next.

So, when my kids get home tonight -- they are 7 and 10 and yes, they are both on Instagram -- I'm going to take a few moments before all the after-school craziness begins to really sit down and talk to them about what it means to use social media correctly and responsibly.

This is something we should ALL be doing. We potty train our kids, teach them good table manners and spend 10 minutes deciphering the food label on a candy bar. And yet, we set our kids up on social media, and then for all intents and purposes, we hang them out to dry.

Checking our kids' news feeds to see what they are viewing, scrolling through their profiles to see what they're posting, investigating the people who want to follow them, finding out who they've given their password to and monitoring all of their accounts (because most kids have more than one Instagram account, in case you didn't know) doesn't make us helicopter parents.

It makes us smart parents.

And there is nothing more beautiful than being smart.

Studies About Kids And Technology