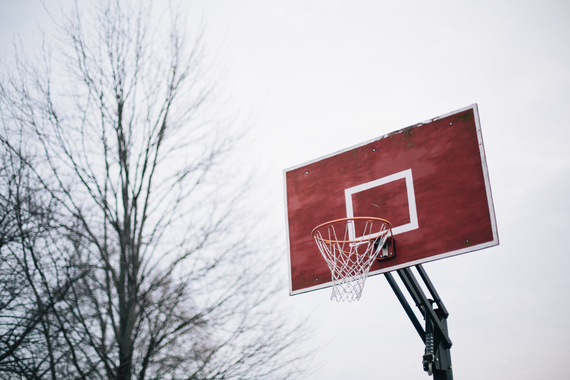 A close friend was raped in high school, got pregnant and had to have an illegal abortion in a hotel. Another close friend was kidnapped at gunpoint and raped in the woods. I just snuck out to party, got raped and went home.

So did it count? For me, it didn't. For 10 entire years, it didn't count. I knew the risk of pregnancy, I knew about abortions, I knew dark, damp alley ways were the scenes of real crimes. And so, I figured, this was one, my rape, was on me. For so many women, this is our story. Our story is one of everyday life. Of everyday rape.

It's at a party. It's with friends. It's in the home next door.

The reason I've decided to speak up now is because I felt compelled to let other rape victims know: it is not your fault. Our fault, it's not. I know what it feels like to see other victims speak up, seemingly powerful and all in control, while sitting alone, at home, in shame, in silence. For months and months and days and days, I sat there, quiet, with you, wondering how could it be that I was so stupid? Why did I sneak out? If I hadn't been so curious, so into "boys," so wanting to be "cool," I wouldn't have been raped. I would have been home, in my room, burning incense, reading and pinning magazine ads to the wall.

I was being raped. Abused. And taken advantage of.

And so, I am here to say: We do count. I count. You count. Our pain matters. And despite our rapes not having seemed like something out of a movie, it is, was and will always be wrong. Plain Jane fucking wrong. And for so long, I dreaded facing my truth. How could I possibly speak up? How could my voice, my story matter in a sea of "real" trauma? Would a simple "everyday rape" mean anything? To anyone?

We were in his parent's house. As he raped me, he told me to be quiet, "my parents are sleeping!" Can you believe that? I recall thinking there is no way I can make this out to be that bad... his parents were home. It couldn't be real. Just couldn't be. And yet, there I was wondering if my back would break because of the deep V shape I had turned myself into trying to escape his penis, unsuccessfully.

It was real. It happened. It counts.

In most cases, when someone acts heroically, we throw admiration, love and honor in their direction as if no one person had been heroic before them. But for rape victims, the heroic individuals, who bravely and daringly confront one of the most personally horrific acts to exist, we bash them, we pity them, and worst of all, we punish them.

For the ten years after my rape, I pretended like it never happened. Dating and loving and networking in Manhattan can certainly cloud ones memory and boy, was I ever ready. Life in South Florida was carefree and sunny, but more than anything, I strove for the hustle and bustle of New York. Losing myself in a sea of work sounded deliriously good. There was nothing better. I'd get a job, make money, eat stupid amazing food, drink exquisite overpriced drinks and sleep with whomever I wanted, whenever I wanted, wherever I wanted. My terms.

But while my fantasy played out, a quiet anger swelled inside of me. The swirling eventually hardened and the doubt learned to speak, "You let him. Of course you did. Of course. You stupid whore." And so, to silence my pain, I took swift action. I dated more, I spent more, and I acted selfishly. I was mean and I only got better with time. I tried all sorts of nasty things just to be louder, to be stronger, to be more powerful than that voice, that voice of shame, of embarrassment, of anger, the living reminder that deep inside me, was a dirty history, sitting, waiting and rotting.

The simple truth is I was raped and I still feel guilty.

I understand it was not my fault. And I hope you know it was not yours. He was a jerk. And they are all jerks. He took advantage of me, of us. He stole moments from our lives, from our souls, from our bodies, that were never open for the taking. And while I wish I could tell you now that I'm strong, powerful and brave, that I beat the voice in my head for good and I'm finally perfect and beautiful, I can't. I'm very much broken. I feel dirty and so abused. But most of all, I feel poisoned by a man I no longer know because he inserted me when I said no.