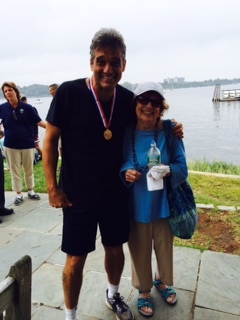 When my first novel was published my mother was in a midtown bookstore busily carrying stacks of it to the front display table - nobody dared to stop her - when suddenly, her task was interrupted by a celebrity sighting.

There wasn't even a thought process involved in what happened next - just an instinctive move by my mother, as natural as a shark reacting to the scent of blood.

Poor Dustin never even saw the fin in the water, rushing his way.

"Excuse me, Mr. Hoffman!" she said, startling the actor as she shoved a copy of "Shepherd Avenue" into his hands. "This is my son's first novel and you really should consider it for your next movie!"

Hoffman stood there slack-jawed as my mother moved on. No need to linger, or chit-chat, or ask for an autograph. Mission accomplished.

And the mission is always the same for Terry Sullivan Carillo:

What can I do next to help my family?

My sisters and I appreciate it, Mom. Not that it always goes smoothly.

When I was a senior in high school I was taking the garbage out one day when I noticed an unopened piece of mail at the bottom of the pail. It turned out to be a recruitment letter addressed to me, from the United States Army.

This was while the Vietnam war was happening. My mother had thrown it out before I could see it.

I was enraged, the way only a 17-year-old boy can be enraged. I screamed at her. How dare she do such a thing, treating me like a little kid! Interfering with my personal mail! What if I wanted to join the army?

My mother let me rant and rave, and when I was through an amazing thing happened.

She apologized. I knew she wasn't really sorry for what she'd done, but she apologized anyway.

She's upbeat, she's energetic, and she greets each day as the gift she knows it to be.

She's had more than her share of health issues, but like an Irish middleweight taking a beating in the late rounds she always insists she's okay, and manages to throw the winning haymaker time and again.

If she had a motto, it would be: Don't stop this fight!

Which is what this life is, after all. A sweet, endless battle to keep going, keep trying, no matter what stands in your way.

Happy Mother's Day, Mom. I think you've got a few bouts left in you.

Which reminds me - when are you going to follow up on that Dustin Hoffman thing? Come on, Mah, it's been thirty years! This is no time to start coasting!

Charlie Carillo is a novelist and a TV producer. His website is www.charliecarillo.co