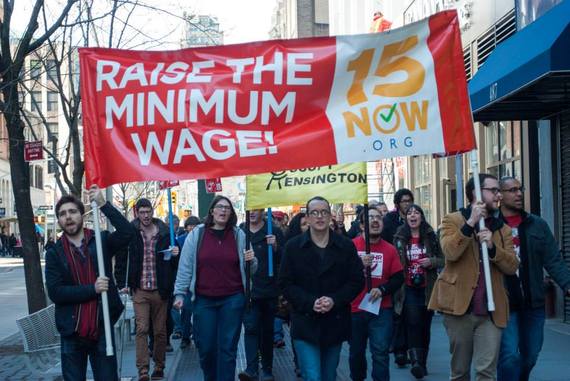 As a recent New York Times article notes, and as every New Yorker intuitively knows, city rents have risen dramatically over the last decade, even as household wages for most families have continued to fall. Since 2000, rents in New York City have increased 18 percent, while incomes have fallen by more than 7 percent, leaving many families strapped, destitute or homeless. Such a situation is not only incredibly unjust but completely unsustainable. How long, one has to wonder, before the entire city is completely stripped of its working class?

The radical precarity and deep inequality caused by such economic terrorism is a perfect example of why the story of New York City in the 21st century really is, as Mayor Bill de Blasio recently claimed, a tale of two cities. While the landlords and bosses continue to capture more and more of the vast surplus value created by New York City, the families and workers that make it run are being squeezed out. Mayor de Blasio and the City Council claim they want to help workers by raising the minimum wage, but de Blasio has yet to truly distinguish himself from his neo-liberal predecessors, and the city council has yet to offer any clear indication of how much they are willing to fight for.

Such political caution and inaction is, of course, not surprising. After all, New York City politicians are notoriously beholden to the capitalist trifecta of finance, insurance and real estate that have dominated city politics for decades. But the workers know what they want and what they need and, though the rent won't wait, the movement for a decent wage for all New Yorkers is just beginning. Leading the fight for New York City workers is a broad coalition of groups, including 15 Now, that have come together to demand a nation-wide minimum wage of $15 an hour for all workers without exception.

Last month, 15 Now, a national movement for a $15-an-hour minimum wage, kicked off its New York City campaign on Sunday, March 2 when members of 15 Now came out to march in the 2014 St. Pat's for All Parade in Sunnyside, Queens. With more than 60 members present, the 15 Now campaign was one of the largest and liveliest contingents in the parade.

That first successful action was followed up on Saturday, March 15th, with two 15 Now marches, one beginning at 425 Fulton Ave. in Brooklyn (which began in front of a recently closed Wendy's restaurant), and the other taking place in Herald Square in Manhattan.

A number of organizations were represented at the Brooklyn rally, such as Socialist Alternative, Occupy Kensington, the Green Party (including its candidate for governor, Howie Hawkins), System Change Not Climate Change, Trade Justice New York Metro, as well as others.

Amidst a sea of red signs demanding a minimum wage increase, Brooklyn passersby flocked to the activists, curious to learn more and to get involved in the campaign. As the march progressed down Fulton Mall, people on the streets began joining in the chants and applauding wildly. "What do we want?" activists chanted.

One worker, forced to stand outside an electronics store and wear a sign promoting all the cheap goods to be had within, began pointing at his boss as the marchers passed, asking when he'd ever get paid $15 an hour. The owner pretended to ignore the marchers, apparently unconcerned with the injustices he helps to perpetuate.

The Herald Square rally began in front of Macy's Flagship 34th Street store. Protesters reviled the retail giant's low wages and called on them to pay their workers a living wage. According to the New York Times, Macy's profit rose 22 percent in 2013 to a staggering $6.28 billion dollars. Is it so absurd to think that some of that profit be given back to the people who actually make Macy's profitable: the workers? In what world is it just or sane to pay workers poverty wages at a company that makes literally billions of dollars?

During the march in Manhattan, 15 Now activists went into two other serial perpetrators of unjust labor practices: Foot Locker and H&M. Take a look at this list of hourly wages at Foot Locker, for instance. Only two positions warrant pay of over $10 an hour, apparently, and no position earns as much as $15 an hour. Meanwhile, according to Salary.com, the CEO of Footlocker, Ken C. Hicks, made $10,546,542 in 2012. So, while Hicks brings in over $10 million a year, he can't find it in his budget to pay a single one of his storefront employees $15 dollars an hour (most of them don't even get nine dollars an hour, according to Glassdoor.com). It is grotesque and shameful, so it is no wonder that employees cheered as marchers streamed into the store.

These rallies and marches signify the growth of the 15 Now campaign in NYC. Its mass appeal and simple demand are uniting activist groups and workers throughout the city. NYC is clearly ready for $15 an hour, we just need people to organize and come together to fight to make sure it happens.

There will be rallies in support of 15 Now on May Day. Learn more about those here.