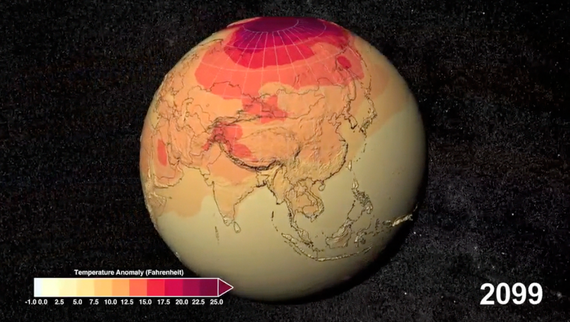 "Do we think about the aerosol propellant in our underarm deodorant every day?" Gavin Schmidt, climatologist and director of The Goddard Institute for Space Studies (GISS), asked me. "I don't think we even have aerosols anymore," I answered, wondering where he was going with this.

"That's the point," he continued, "and nobody cares. Nobody cares where your energy comes from; nobody cares whether your car is electric or petrol. People confuse energy supply with where the energy is supplied from." He was trying to make the point that as long as people have the things they want, it doesn't matter, to the vast majority of us, how we get them. This means that as long as the light switch still turns on the lights, most people would barely notice if we were to shift from burning fossil fuels to energy sources with less impact on Earth's climate (just as people don't notice that ozone-depleting propellants aren't used in aerosol cans any more).

I was eager to speak with Dr. Schmidt because of his passion for communicating climate science to public audiences on top of his work as a climatologist. Schmidt is a co-founder and active blogger at Real Climate and was also awarded the inaugural Climate Communications Prize, by the American Geophysical Union (AGU) in 2011. "My goal in communicating," he explained, "is a totally futile effort to raise the level of the conversation so that we actually discuss the things that matter."

Since the mere mention of a computer model can cause an otherwise normal person's face to glaze over, I thought Schmidt, a leader in climate simulations and Earth system modeling, would be the ideal candidate to explain one of the most important, yet probably one of the most misunderstood, instruments scientists have for studying Earth's climate. See, people commonly confuse climate and weather, and this confusion is perhaps most pronounced when it comes to understanding the difference between a weather forecast and a climate simulation.

Schmidt asks the computer to calculate the weather in 20-minute time steps and see how it changes. Every 20 minutes, it updates its calculation over hundred-year or even thousand-year periods in the past or the future. "The models that we run process about three to four years of simulation, going through every 20 minute time step, every real day."

A typical climate simulation code is large, as in 700,000 lines of computer code large. For comparison, the Curiosity Rover required about 500,000 lines of code to autonomously descend safely on Mars, a planet 140 million miles away with a signal time delay of about 14 minutes. The size of a typical app, such as our Earth Now mobile app, is just over 6,000 lines of code. Climate simulations require such a large quantity of code because Earth's climate is so extraordinarily complex. And, according to Schmidt, "Complexity is quite complex."

Like a scientist who runs an experiment in a science lab, climate modelers want code that's consistent from one experiment to another. So they spend most of their time developing that code, looking at code, improving code and fixing bugs.

he model output is compared to data and observations from the real world to build in credibility. "We rate the predictions on whether or not they're skillful; on whether we can demonstrate they are robust." When models are tested against the real world, we get a measure of how skillful the model is at reproducing things that have already happened. Then we can be more confident about the accuracy in predicting what's going to happen. Schmidt wants to find out where the models have skill and where they provide useful information. For example, they're not very useful for tornado statistics, but they're extremely useful on global mean temperature. According to Schmidt, the credible and consistently reliable predictions include ones that involve adding carbon dioxide to the atmosphere. "You consistently get increases in temperature and those increases are almost always greater over land than they are in the ocean. They're always larger in the Arctic than in the mid-latitudes and always more in the northern hemisphere than the southern, particularly Antarctica. Those are very, very robust results."

Lately, his team has been working on improving the code for sea ice dynamics to include the effects of brine pockets (very salty fluid within the ice matrix) as well as the wind moving the ice around. For example, to understand the timeline for Arctic sea ice loss, his team has to work on the different bits of code for the wind, the temperature, the ocean and the water vapor and include the way all these pieces intersect in the real world. After you improve the code, you can see the impact of those improvements.

I asked Schmidt what people's behavior would look like "if they understood that burning fossil fuels produces carbon dioxide, which causes global warming." He replied, "People would start focusing on policies and processes that would reduce the amount of fossil fuels without ruining the economy or wrecking society." Then he added, "I think, I hope! that people will get it before it's too late."