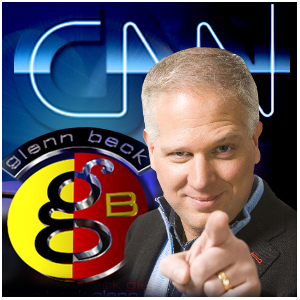 As we've already seen, whenever CNN's Glenn Beck finds himself straining to maintain the surfeit on inanity his employers ask him to dispense, it's okay, because there's never a shortage of scintillatingly ludicrous people willing to crawl out on the limbs of the WTF tree with him.

On Thursday's program, Beck took up the issue of the rabblerousing Code Pink, recently seen in flagrante brandishing bloody hands at Condoleezza Rice as she was set to testify before the House Foreign Affairs Committee. Naturally, this sort of thing is right in Beck's wheelhouse, and he sets up the segment brimming with faux-concern for the Democratic Party: "Our Democratic parents and grandparents honestly would be ashamed of these people." Having framed the matter thusly, what guest does he get to discuss the matter? Washington Times correspondent Andrea Billups. Yeesh.

BECK: And I want to ask you the question. Hillary Clinton has never spoken out about these people. No one in the Democratic Party has said anything. It`s "no comment" about Code Pink. Why?

BILLUPS: Well, Glenn, I think that Hillary is sort of in a difficult position, because these women, if you look at them, are sort of her base in a way. These are women who are feminists. They`re, some of them, professional women. So for her to speak out puts her in an awkward position.

Oh, my...such clowning! Code Pink's avowed mission is to "[Call] on women around the world to rise up and oppose the war in Iraq and future wars." Hillary Clinton, by contrast, voted to authorize the war, and has made it clear during her campaign that has no plans to withdraw all troops from Iraq. As the New York Times reported: "Senator Hillary Rodham Clinton of New York would leave residual forces to fight terrorism and to stabilize the Kurdish region in the north." Clearly, Clinton's position places her at odds with Code Pink, but it hardly puts the candidate in a "difficult" or "awkward" position. Despite being "feminists" and "professional women," Code Pink is clearly not a part of Clinton's "base."

Billups herself even seems to understand this, noting that "they have followed her around and protested at events that she's had." She just lacks the cognitive skills to understand that saying these women form part of the Clinton base is a straight up gaffe -- a contradiction. "Democrats, you've got to divorce yourself from these people, because this is who`s hijacked your party," Beck concludes, having skillfully provided nary a shred of evidence that anyone's been hijacked at all!