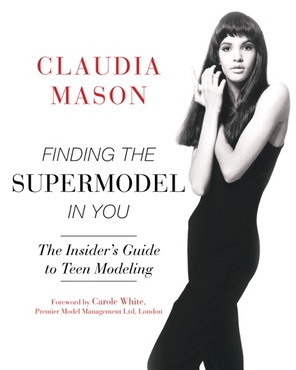 Yearly, thousands of young kids reach out to modeling agencies in the hopes of becoming a model. They call, send pictures and letters in the mail, show up unannounced at the agency's doorsteps, and call relentlessly to follow up, hoping to find a place in the spotlight. These girls and boys have no guidance or frame of reference. With that in mind, supermodel Claudia Mason, one of the members of that elite group of girls who made a name for themselves in the 90's (alongside Claudia Schiffer, Naomi Campbell and Christy Turlington); decided to lend a hand. With the new book "Finding the Supermodel in You - An Insider's Guide to Teen Modeling", Mason draws from her experiences as a model, breaking down the entire profession bit by bit.

Other than articles found online briefly describing the inner works of an agency, a model's career, or modeling schools, there's very little objective and helpful information that can be obtained to help in a model's pursuit. Not only that, but modeling schools who are supposed to guide and manage aspiring models, many times are no more than a very expensive source of useless advice. These companies seem to be more concerned with padding their bank accounts rather than honestly selecting talent that has potential for a career in a very selective industry.

Claudia speaks from experience, from many years of trial and errors in which she navigated pretty much every scenario a model wannabe can dream of. Mason's tips range from what type of clothing to wear when meeting agents and clients, to what foods to eat and which beauty products to pick at the drugstore.

Claudia's career started when she was only fifteen years old. This native New Yorker was a dance student and professionally trained by some of the best the Big Apple had to offer. After her health prevented her from moving forward with her dream of being a professional dancer, fate took her for a spin. One afternoon after school, Claudia was approached by a model agent who saw potential in the young girl. Claudia's first modeling job was with the legendary photographer Richard Avedon, who repeatedly brought her back for other shoots throughout the years. Mr. Avedon shot Claudia for multiple Vogue covers and editorials, various campaigns for Versace, among others. Claudia was "One of the Most Beautiful Women in the World" according to her Revlon ad. This was the late eighties. Concerned with her studies, Claudia's parents put a break on her career until she finished school.

By the time she returned to the scene at age 18, the nineties were in full swing and Claudia fit right in the middle of that famous supermodel group. The credits attached to her name speak for themselves: campaigns for brands like Fendi, Louis Vuitton, Christian Lacroix, Gianfranco Ferre, Gianni Versace and Versace Jeans; magazine covers for titles such as Vogue, W, Harper's Bazaar, Cosmopolitan, Elle and Mademoiselle and an enviable list of photographers which includes Steven Meisel, Steven Klein, Helmuth Newton, Irving Penn, Bruce Weber, Patrick Demarchelier and Mario Testino to name a few. Her list of runway shows would be far too extensive to mention, but it's no less iconic. Claudia Mason had arrived!

As this girl's career progressed from model to supermodel, Claudia started integrating some of her other passions into her bookings. Mason dove into acting as well as TV hosting, which landed her the top position on Mtv's "Fashionably Loud", a cross between fashion and music in one TV show. Her acting brought her awards in theater and many positive reviews by top critics. Upon her return to New York in 2010, amidst bookings with Katie Grand for Love Magazine and Vogue Russia, Claudia began to refocus her energy and work on a plan for her next career phase.

The tireless supermodel decided this was the time to give back to the world some of the good things she earned. She turned a negative health scare into a positive action and joined the American Stroke Association as a spokesperson, bringing awareness to an issue that affects men and women of all ages around the globe. On that same year she also began developing a TV show, which is currently in pre-production. Somehow, in the middle of all this, she still found time to work in movies and write a book - this, her biggest passion project. 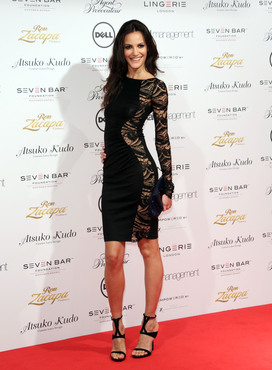 In her guide to teen modeling, Claudia hopes to shed some light on matters that have been obscure to most people. She has no problems speaking out about health issues and drugs, topics that have always surrounded the modeling profession in the eye of the media. The model considers herself lucky for being able to work and still be close to home and her family, a luxury that most girls can't afford. She also found a team that supported and protected her every step of the way.

With this book, Claudia is a part of her reader's team. The author keeps things simple, the goal is not to pontificate, but to maintain an open dialog. Mason created check lists for the young girls and approached the industry's top professionals to make sure that her reader would receive the best information available from every area of the business.

Claudia's career is a brilliant example of fortitude and creativity. Here is a woman who was never afraid to brake boundaries and try new approaches. Because of that Claudia was able to live out all her dreams. Now Claudia enters a new phase, one that is more mature but not less exciting, one that aims to bring the dreams of many aspiring models to reality too.