The other day, out of the blue, my wife Donna said to me, "Remember when we used to make fettuccini Alfredo using that Knorr powder?"

She could have hit me on the head with a Griswold and gotten the same effect. "My God, she's right," I thought. For someone who urges people to make BLTs from scratch (cure your own bacon, bake your own bread, grow your lettuce and tomato, make your own mayo), someone who rails at a country that buys into food companies' insistence that cooking is too hard and you're to STUPID, this is an admission. I'll repeat it: For years, I used Knorr powder to make Alfredo sauce for pasta.

I began cooking in the fourth grade because I was home alone after school and hungry. If I wanted food, I had to make it myself, and starch out of a bag (pretzels) and hot buttered starch (macaroni, a bagel) get tired after awhile. The first wholly independent creation came after a Julia Child TV show gave me the inspiration to make a fruit tart (truly awful, but my father, arriving home from work, registered astonishment sufficient to warrant my disregarding the actual flavor and register the pasty pastry as an accomplishment).

The next creation was a potato "omelet." I sautéed small diced potatoes (I can't imagine what a nine-year-old's dice actually looks like but I remember it as being impressively small). I'd pour two beaten eggs over the potato, cook it, invert it onto a plate and slide it back into the pan to finish cooking. This thing was fabulous, as far as I was concerned. When I wanted sweets, I made these lemon bars, which still strike a deep nostalgic chord in me.

I would graduate to dishes like beef stroganoff using canned soup (I liked tomato with a can of "cooking" sherry and a bay leaf, Donna preferred the more traditional Campbell's cream of mushroom). I would move on to fettuccine Alfredo using the Knorr powder.

How was this possible? One, if I'd tried to make the dish out of a book at the time, the late 1980s, the Parmesan cheese I'd have reached for would have come in a can labeled Kraft. It would be years before I heard the name Parmigiano-Reggiano, the Italian wonder that makes Alfredo so amazing (
my recipe's here
, it's a breeze). How far I came as a cook, even before I went to culinary school to write
a book about it
! How far this country has come! We're making our own BLTs from scratch, were making
bowls out of chocolate chip cookie dough
to fill with homemade ice cream. 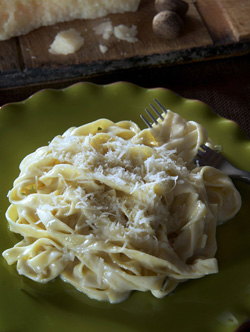 Which is why I don't rail against even the worst of the dump-and-stir cooking shows; why, yes, I would not try to dissuade you from watching Sandra Lee and making her Semi-Homemade goods. If that's your thing, so be it. True, my evil cohort, Tony Bourdain has called Ms. Lee the "frightening hell-spawn of Kathy Lee Gifford and Betty Crocker [who] seems on a mission to kill her fans, one meal at a time"--and not without justification.

To anyone who cares about food, yes, she is truly spooky. Yes, given a can of Cheez Whiz, she may rank among America's most dangerous. But can I fault her? Not I, who used to make the world's easiest pasta sauce by cutting open a packet of powder. Nay, brethren, I say watch Sandra Lee if you like her, make her recipes, and make them again, because eventually, you are going to want more, and you are going to want better. I don't care where you start, only that you start.

Even Thomas Keller wasn't always Thomas Keller. He was once the cook who made "spinach" fettuccine using green food coloring.

I don't care where you start, only that you start. America will be ready for you, with fresh hog bellies to cure and ripe tomatoes at the farmers markets, with genuine, glorious Parmigiano-Regianno in almost every grocery store. America has only just begun to cook.

Author, most recently, of Egg: A Culinary Exploration of the World's Most Versatile Ingredient