"She's gonna change the world someday, and I'm not sure she even knows it." 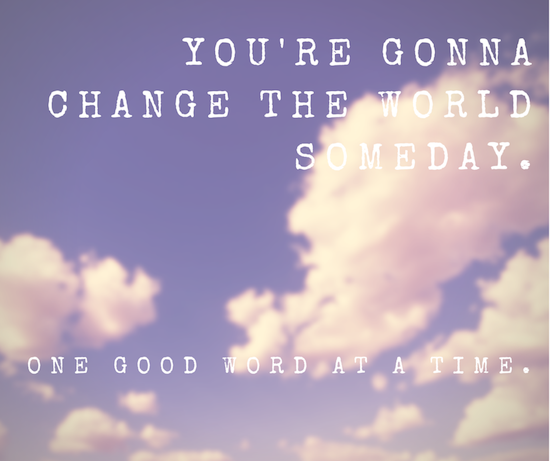 You'd think I'd be quoting Gandhi or someone profound here. Right? Nope. This is what Lucas Scott said to Brooke Davis on that infamous CW show One Tree Hill.

A few years back I would have been totally mortified to be quoting a silly dramatic TV show but today I stand here proudly waving my true silly colors.

Because there is something truly eloquent to be found here.

That's why I became an entrepreneur. To have a say in my own future.

But something's happening now. Even though I realized that going into business for myself was the equivalent of signing up for a crash course in personal development, something new has developed that I didn't see coming. I went in as an entrepreneur.

Yeah, that. It's a transition I wasn't originally planning for. A fan of classic movies and iconic characters growing up, I didn't necessarily want to emulate Edward Lewis personas in real-life.

I didn't strive to be in charge or lead. Leadership terrified me.

But I'm slowly starting to understand CEO-ship a little bit differently now. I see women like Jessica Alba leading her honest team and infusing her passion in every product she creates. Because when you create something from your own big heart dreams, there really is no one else who can lead it.

In the midst of this whole process, there have been a few key transitions.

1) When I decided upon this entrepreneurial adventure I simply stated that I was a life coach helping people find their purpose. Until I realized I had to make money at this thing because it wasn't my intention to have a luxurious hobby but a life's work.

The shift? Coming to terms with the "I have to make money now" part so I stepped up and became an entrepreneur.

2) Then I met another transition about a year and a half in. That one was known as the "who am I in this business" phase. This happened towards the end of 2014 because I came to the sudden realization that I had become pretty good at marketing myself and my business, but I didn't identity with what I was selling. Leaving me with sporadic Paypal payments and the worry that I'd have to go back to a 9-5.

That's when I came to terms with the 'I need to identify with my message' part so I rebranded. I became business owner.

3) Now I'm in yet another transition. But it's good, and totally uncomfortable.

This past year I stripped off everything that wasn't working before and got really acquainted with myself, my message and who I wanted to serve. I went back to my big dreams and infused all of me into what I created. Which made me start to realize 'I can't be a scrambling business owner anymore...I've got to own what I do.'

Hence, why I'm on a journey to becoming CEO.

It's not just about the big picture here and looking at leveraging what's working. It's about the deeper message.

When I went from life coach to entrepreneur, I had to understand that my dreams were worth investing in. When I morphed into business owner I had to take in the fact that I was actually capable of transforming peoples' lives.

Now, on this journey to CEO, I'm learning that I have a say in how I want to run business and lead this bigger vision to execution.

Stepping up to the plate in a bigger way professionally and personally. It doesn't mean that you just take up the reins to decide who's a right fit for your company but it's you coming to terms with the fact that you are worthy of this.

It means you're finally starting to wake up to the idea that you have the unlimited potential within you to change the world. And the day you're gonna do it is today.

What everyone else has saw in you up until this point is now coming to fruition in your own eyes. You're seeing what you're capable of and how your big dream inside of your heart is going to leave a major legacy.

On that note I want you to know, fellow lady entrepreneur, that you're going to leave a dent in the world. When you start to recognize and voice the worth inside of you.

This is what I'm learning as I become my own CEO.

The more pieces that come together for me help the world I'm trying to create become a little more whole.

"When you're a leader, the success becomes about growing others." ~CEO musings