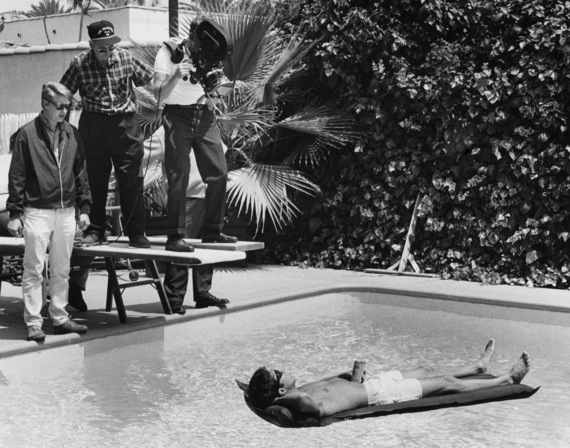 Mike Nichols directing Dustin Hoffman on the set of "The Graduate"

On February 22nd, HBO will air Becoming Mike Nichols, a conversation between actor/director/producer Mike Nichols and his friend and colleague Jack O' Brien.

Recorded only four months before Nichols' death in 2014, the documentary is a treasure trove of hard-earned wisdom from an American master whose accomplishments include:

Film: The Graduate, Who's Afraid of Virginia Woolf?, The Remains of the Day, Postcards from the Edge, The Birdcage, Working Girl, Silkwood, Biloxi Blues

Yes. All that. And more. But born Michael Igor Peschkowsky in Berlin, 1931, his own story may be more riveting than all of his films and movies combined.

In 1939, his father fled to New York after a patient tipped him off that surnames starting with "P" were next on the list of Jewish doctors to be hauled off to concentration camps. A year later, Nichols and his 4-year-old brother made the same sea voyage alone, because their mother was too ill to travel. It was a harrowing departure.

"First of all, we're stopped on the gangplank, cause Hitler was making a speech," he recalls. "Each lamppost had a speaker. And traffic stopped, when Hitler spoke. And that meant we couldn't get on the boat until the speech was finished."

Upon arrival in New York, Nichols spoke only one sentence of English, "which was 'I don't speak English, please don't kiss me.'"

But he began learning both English and the language of film almost immediately, heading to the Beacon or RKO theater every day after school.

"I didn't care what movie was there, I would see it," he says. "And it was sort of my playground."

As a teenager, seeing Marlon Brando in the stage version of A Streetcar Named Desire changed the trajectory of his life forever.

"We sat stunned, pole axed," he recalls. "We didn't go the bathroom, we didn't move for the length of the thing. And we sat silent during the intermissions. To this day it's the only thing I've seen that was 100 percent real and 100 percent poetic, both at the same time."

He would have a similar reaction to Who's Afraid of Virginia Woolf, a galvanizing experience that would serve him well many years later. But his own rise to theatrical stardom began with a glimpse of "a great looking girl in the front row," at an early performance.

It was Elaine May, an improvisational actor with whom he would have an instant rapport and create An Evening with Nichols and May, the comedy show that made them Broadway -- and TV -- legends.

Carousing with the cast of Camelot during his May days led to a friendship with British actor extraordinaire Richard Burton and an historic directorial debut. That story begins with an invitation to visit Burton and his new love, Elizabeth Taylor, on the set of Cleopatra.

One afternoon, preoccupied with scenes that did not require Taylor's presence, Burton asked Nichols to entertain his famous companion. It was the beginning of both a remarkable friendship and one of the most important projects of his life.

"Years passed, and I heard that they'd hired her to do Virginia Woolf," he explains. "And I said to a press guy who worked for both of us, I said, 'Tell Elizabeth -- and I'm amazed that I had the balls to do this -- that I should direct it.' And he called me back and said, 'She agrees with you.' So that's how I got my first movie."

It stunned the world, that film. To many, Taylor seemed a very odd choice for such a demanding and unflattering role. But freed from her "glamor girl" image, Taylor seethed with rage and raw sexuality, sometimes stealing scenes from Burton who'd been expected to eclipse her entirely.

Woolf won five Oscars -- one for Taylor, in fact. Nichols would go on to win his own Oscar, plus four Emmys, nine Tonys and a Grammy. And his very practical, even technical insights about his craft make this documentary even more valuable.

For writers, for instance, there's this now famous nugget of wisdom:

"There are only three kinds of scenes: negotiations, seductions and fights. I'm finished. That's all. All scenes come into one of those categories."

Filmmakers, here's one about the virtues of shooting in black and white:

"It's not literal. It is a metaphor automatically. And that's the point of movies. 'What is the metaphor?' you ask when you're trying to solve the problem. If you're in black and white it's partly solved. It is already saying, 'This is not life, this is something about life, a version of life.'"

But it's not all "sage on the stage" stuff. This is, after all, the same Mike Nichols who split America's sides for many years. So there are also stories like this, about a writer/producer so bad, "I had to throw out everything he'd written."

"I will tell you one thing he'd written just to put you on my side," Nichols relates, eyes lit with mischief. "The title of the movie was George Taking a Walk at Night. And he describes the things he sees at night. And one of them was what was described as 'two dogs f--king.' But it said in parentheses, 'This must be beautifully shot.'"

That's not the punch line, funny as it is. That comes after a perfect pause.

"I showed this to a designer friend," he says, eyes still glittering. "And she said 'I can do it! I can do it! I need Afghans! And lots of fans!"

Funnier than fiction. From a man whose life story reads like a novel.