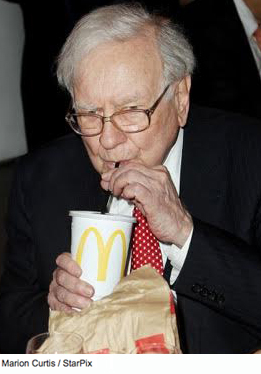 On inauguration eve, a different man of wealth was feted at MoMA, at a special screening of Becoming Warren Buffett. HBO's Richard Pepler described the film's subject as a man of decency, integrity, and character. Directed by Peter Kundhardt, this riveting film illuminates the life and work of Buffett, born in the depression in Omaha, to become one of the richest men in the world. And yet, he seems the opposite of many men of means: humble, self-effacing, humanitarian, without any posturing or affect of wealth. In an initial sequence, we see him driving himself to work, stopping at McDonald's, weighing in on his breakfast choices. Many viewers of this essential documentary will look for his wisdom on how to amass wealth and make profitable investments. While few have his genius, his tips are of value. But even more vital is the realization that the ability to live as he does is within everyone's reach, rich or poor.

A warts and all portrait, Becoming Warren Buffett, provides a candid view of his home life, his early marriage to Susie. She was 19, he 21. He plainly admits that his real journey was learning how to understand other people. His three children are all dedicated to Susie's mission, giving away wealth. Each one chairs a foundation. In Susie's spirit, Buffett has given much of his money to Bill and Melinda Gates for their philanthropic work. A man of social conscience, Buffett saw racial inequality and admired Martin Luther King. And in one poignant moment, Susie quotes her husband as having said, "Wait till women discover they are the slaves of the world." The film ends with Warren Buffett singing "Over the Rainbow," a song he used to sing to his daughter Susie, when she was little. This is a picture of a man in full.

Noting that Buffett does not want to be fussed over, Richard Pepler apologized that guests for this special screening at MoMA, including Billie Jean King, Gloria Steinem, Bob Colacello, and many suits, would be making a fuss over him. Amiable and soft voiced, Buffett took it in stride, shaking hands, taking pictures, and speaking with everyone. Waiters came around with caviar and lobster canapés, on plexiglass trays encasing Duracell batteries, a nod to one of his companies. Chicken pot pie was among his favorites served at the dinner buffet. At one table, See candies were offered in swag bags. It's not clear how much of these treats he actually ate. Buffett was given a bag of his true food preference, a McDonald's burger and Coke. By dessert time, those lingering were happy to lick Dairy Queen chocolate pops, and orange creamsicles. Heartland delicacies to be sure!