Those suffering from bedbugs may try freezing, burning, or poisoning the pests, often to no avail. Now, researchers have provided evidence that a Balkan folk remedy is effective—and inflicts a deliciously nasty end on the itch-inducing bloodsuckers. For centuries, people in the Balkans protected themselves against bedbugs—among them the common species Cimex lectularius seen on the left—by scattering bean plant leaves next to their beds, then burning the leaves in the morning.

To find out how the method works, researchers filmed bedbugs as they scuttled across kidney bean leaves, which are covered in microscopic hairs; the image on the right shows the hairs in green and a bedbug leg. Within seconds of stepping onto a leaf, the bugs got entangled in the hairs, which tethered the pests in place. Images taken with a scanning electron microscope showed that the leaf hairs had pierced the bugs' feet, and when a trapped bug struggled, it simply got itself impaled by more hairs. The few desperate bugs that managed to break free usually got stabbed by another hair almost instantly, the team reports online today in the Journal of the Royal Society Interface. 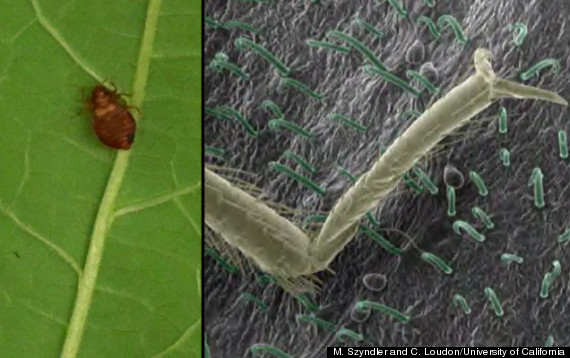 The researchers fabricated artificial replicas of bean leaves that had synthetic "hairs" with tips just as sharp as the real thing, but the copies failed to capture any bugs, perhaps because the "stalks" of the simulated plant hairs differ from the genuine article. So the bedbug-infested may have to scratch where it itches for a little while longer.

ScienceNOW, the daily online news service of the journal Science.