BROOKLYN -- Isaiah Rivera was playing in an elephant-shaped sprinkler on a warm Sunday afternoon earlier this month when two men charged into the playground and fired 13 rounds, grazing the 3-year-old's leg.

Three days later, the boy's father, Jose Rivera, took the microphone at an anti-violence rally sparked by the Bedford-Stuyvesant shooting. As the young father addressed hundreds of neighbors, local elected officials and community leaders gathered in the park, Isaiah slept in a stroller at his parent's feet, a scrape on his shin.

"This gun violence needs to stop," Rivera said, standing with his pregnant wife and two eldest sons. "It shouldn’t take a 3-year-old little boy to bring a community together, to understand that enough is enough."

Shootings have increased 25 percent in the Bedford-Stuyvesant neighborhood in Brooklyn, and 12.1 percent citywide, compared to the same period in 2011, according to the New York Police Department. During one week in July, 18 people were killed in 77 shootings, a 28.3 percent increase from 2011. Isaiah was shot at the end of that week when two men fired at a group playing dice in front of 386 Pulaski St., near the playground where he and other children were playing. The playground shooting has provoked widespread community outrage.

"Children are becoming victims more and more in these communities," said the Rev. Taharka Robinson, founder of the Brooklyn Anti-Violence Coalition, which organized the rally. "If you can have an individual spray bullets where children are playing nearby, there's something wrong. We need to get to the root of the problem."

Although the NYPD now boasts some of the lowest crime rates since the early nineties, citywide crime reports since 2010 have increased almost 5 percent. Some community activists and elected leaders blame slashed budgets and high unemployment for leaving some of the city's poorest neighborhoods without the resources to keep youth off the streets and away from crime.

The day after Isaiah was hit, police arrested Stanley Williams, 20, for driving the getaway car, and Antonio McCloud, 22, the accused shooter in the playground incident. Hours before neighbors gathered for the rally, Williams and McCloud were arraigned in Brooklyn Criminal Court where they were held on $1 million bail each for attempted murder, assault, weapons possession, and reckless endangerment. Jashid Chambers, who the NYPD also believe to be a shooter, is still at-large.

While Williams' lawyer questioned the high bail because Isaiah sustained only minor injuries, community activists and area residents expressed outrage that a child would be injured at all by gunfire.

"This is an area for children … the children should be able to play here," said Catherine Granville, whose son Michael was walking the family dog when he was hit with a stray bullet from a shoot-out about 50 feet from where Isaiah was shot. Six years later, the bullet is still in his chest, his mother said.

Some Bedford-Stuyvesant residents link poverty and high unemployment in the area to the outbreak of violence. At the same time shootings increased 25 percent in the neighborhood, overall unemployment in Brooklyn also increased. One-third of residents in the Census tract where Isaiah was shot have an income below the poverty level.

"A lot of kids are falling out of the system because they have nowhere to go, so they hit the streets," said New York Assemblyman Rafael Espinal Jr., who represents Bedford-Stuyvesant. "On the street, the way they empower themselves is they carry a gun."

Others believe Ray Kelly, commissioner of the New York Police Department, should work to improve community relations, which have worsened since Isaiah was shot. The Tuesday after the incident, Kelly said activists and politicians are "shockingly silent" about violence in their communities.

Following widespread outcry over his comments, the Rev. Al Sharpton suggested over the weekend that Kelly meet with minority-group leaders and local politicians at a summit on gun violence.

"People are dying. The commissioner threw out the gauntlet to leadership and elected officials," Sharpton said at his National Action Network headquarters in Harlem. “Now, let’s come to the table and see what we can solve."

Though Kelly expressed interest, he came under fire a few days later when WNYC radio released a map showing that the police's controversial stop-and-frisk practices aren't necessarily effective in seizing illegal guns. In the block where Isaiah was shot, for instance, at least 100 stop-and-frisks occurred in 2011, but no guns were found.

While many speakers at the anti-violence rally called for more youth programs and services in the neighborhood, others said it was not just up to the community leaders and politicians.

"If we see the neighbor-next-door's son got a gun, what are we doing to prevent the next murder?" asked Robin Lyde, whose son Benny was shot to death in 2005 on his stoop in Crown Heights, just south of Bedford-Stuyvesant. "It was my son yesterday, it was Isaiah not too long ago, it could be yours in an hour's time."

"It needs to stop now. Who's going to be the next victim?" he asked. 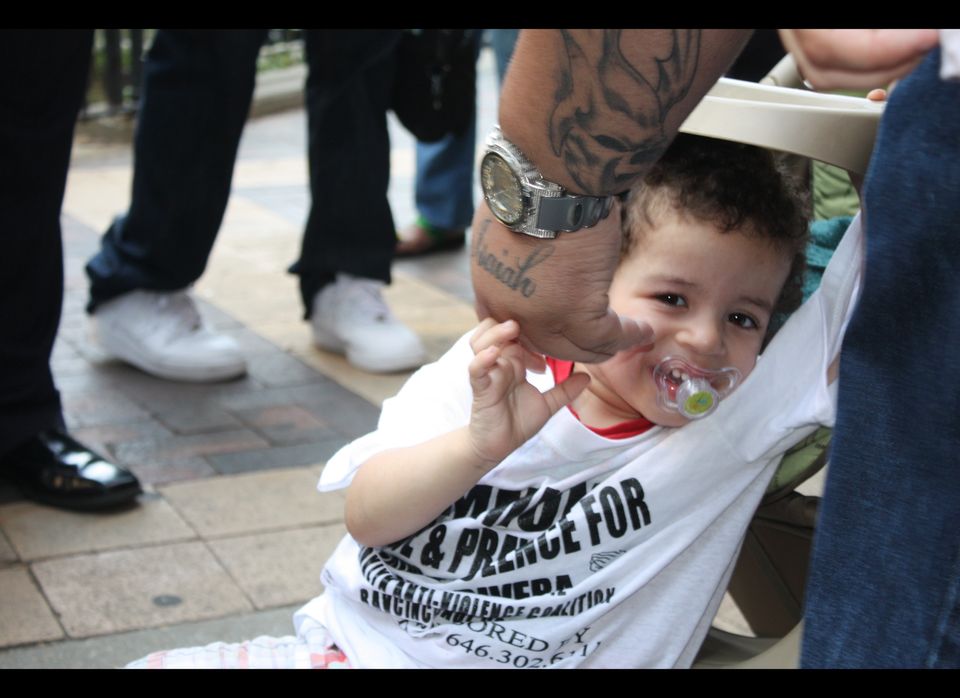 1 / 10
Isaiah Rivera enters the playground where he was shot three days earlier for a community rally against violence held for him.
Anna Sanders