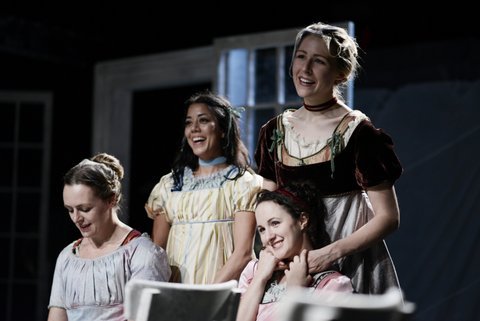 New York theatergoers with an adventurous spirit -- or mainstream theatergoers unafraid to venture off off Broadway when recommendations warrant -- are being rewarded this month with special treats of high quality and relatively low price.

The Bedlam Theatre Company raised eyebrows and earned huzzahs last season with its four-actor productions of George Bernard Shaw's Saint Joan and Shakespeare's Hamlet. I didn't see Hamlet, as I only discovered Bedlam the final weekend of its run. Saint Joan, though, was smashingly good; stripped of its trappings and the two-dozen actors normally needed to present it, Shaw's central ideas were searingly presented in a direct, immediate and exciting manner.

Bedlam is back, in a basement space on Bleecker Street near the Bowery, for a second season. To the considerable number of theatergoers who heard great things about Bedlam last year but didn't get there, I can only say: go! This time, the brave young company is presenting Jane Austen's Sense and Sensibility, in a translation by Kate Hamill; and Anton Chekhov's The Seagull, in a translation by Anya Reiss. Both are performed by ten accomplished actors who seem delighted to be spending the evening with you.

Working in a bare space with minimal scenery and props, Bedlam purposely brings their intimate audience -- they are happy with eighty bodies in the seats -- into direct contact with the actors and thus the characters. Both plays are presented in a rectangle of a space in what seems to be a church basement. (Technically, this is the Black Box Theatre of The Sheen Center.) Sense and Sensibility begins as the cast, in rehearsal clothes, mingle with patrons seated on chairs surrounding the playing area. Rock music is heard, and the actors fall into a contemporary dance. Within moments, they move into somewhat more formalized lines, and haphazardly start dropping articles of clothing to reveal nineteenth century underdressing; within moments, they are magically dancing a Pump Room gavotte and we are fully in Austen-time.

Sense and Sensibility -- Austen's first published novel -- is the comedy of manners about the Dashwood sisters of Norland Park, Elinor (with a full store of common sense) and Marianne (filled with sensibility, or emotion). Cheated out of their inheritance and forced from the family home by a rapacious sister-in-law, they pull through and form happy alliances while novelist Austen entertains us with her sharply-drawn character studies. One of the pleasures of Austen's novels is her ability to dissect characters with a mere sentence or two. Part of the sparkle of this adaptation is that Author Hamill (who also plays Marianne) and director Eric Tucker (who plays the larger-than-life neighbor, Mrs. Jennings) are able to translate Austen's sharp pencil to the stage.

Bedlam's Sense and Sensibility is unalloyed joy altogether, with Andrus Nichols -- co-founder of Bedlam with Tucker, and the actress who was so memorable as Shaw's Joan -- at the play's center as Elinor. Delectable portrayals abound, including those from Jason O'Connell (as the earnest suitor Edward Ferrars and in a grand comic turn as his bluff brother, Robert); Samantha Steinmetz, in her guise as Anne Steele; Stephan Wolpert, who as Sir John Middleton seems to be channeling Joseph Jefferson as Rip Van Winkle; and Laura Baranik as nasty sister-in-law Fanny. But all of the actors contribute droll characterizations.

As for The Seagull, this will be covered more fully by my Huffington Post colleague but playgoers can feel confident in rushing to see either or both before the Bedlam season ends on December 21. Let me add that the Chekhov -- which retains the characters and names, but places them in contemporary times -- takes the play out of the realm of what Konstantin rails at as museum theatre ("three walls, some artificial light and seat a few hundred people down to watch people like them pretend to be people like them") and puts it in our laps. The actors are equally stellar here, with a special nod to Ms. Baranik as Nina and Mr. O'Connell as Trigorin.

At intermission of both Bedlam plays, I noticed a considerable portion of the audience quiz the house staff ("is the other play just as good!") and enthusiastically consult the schedule on the wall to see when they could return for more Bedlam. With tickets at $30 ($15 for students), you might want to pay a visit to Bleecker Street.
.
Sense and Sensibility, Kate Hamill's adaptation of the novel by Jane Austen, opened November 10, 2014 and continues through December 21 at the Sheen Center
. 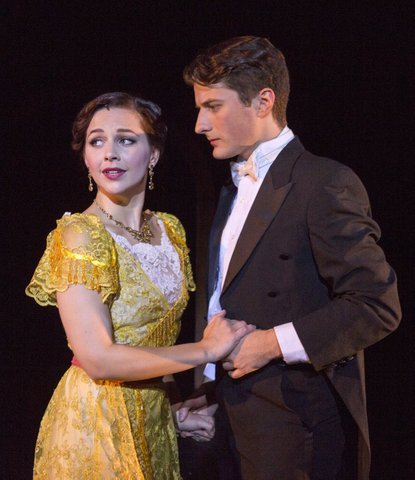 Jessica Grové and Matt Dengler in The Underclassman. Photo: Richard Termine
Uptown on 42nd Street -- at the Duke, the second-floor space next to the American Airlines Theatre -- is a sparkling delight of a musical, Peter Mills and Cara Reichel's The Underclassman. Matt Dengler and Jessica Grové lead an impressive and young cast of nineteen, backed by an impressive-sounding eight-piece band in an intriguingly staged and designed production.

What makes The Underclassman work, though, is the incessantly charming and happily melodic score by Mills (who also gave us Illyria). The time is 1915-17, the period in which America was tip-toeing around involvement in The Great War being fought in Europe. Mills takes full musical advantage of the era, although some of that pep seems to come from the Twenties. (One is reminded, again and again, of the playful insouciance of early Rodgers & Hart.)

Ms. Reichel, who collaborated with Mills on the book, sets the piece a-twirling with the assistance of choreographer Christine O'Grady and designers Ann Bartek (sets), Sidney Shannon (costumes) and Bran Tovar (lighting), while music director/orchestrator Daniel Feyer makes it all sound swell.

Audiences are so likely to be entranced by this unexpectedly accomplished, full-scale musical comedy in the intimately-scaled Duke that they will be more than happy to overlook the problem that might stand in the way of future life. (The musical has been under development by Prospect Theater Company since 2005, when it was produced on the lower East Side as The Pursuit of Persephone.)

The Underclassman is a middle class boy from Minnesota who while performing in Princeton's annual Triangle Club Show -- an all-male affair, famed for its can-can kick line -- meets a well-known debutante and falls in love. The first act consists mostly of them writing letters to each other, with the boy almost getting a kiss from the girl as the curtain falls. In the second act, he does get that kiss but then loses the girl when he wears plebeian brown shoes to a Lake Forest house party where all the others are clad in white.

That's it for the plotting. As we move along, we have interludes about writing letters, fraternities, the Triangle shows, going to the seashore, going to War and flunking classes. What is intended to make this all extra-interesting is the fact that the boy is called F. Scott Fitzgerald, with the characters taken from This Side of Paradise and other writings.

Forty years ago this might have engaged audiences, and they might have cared that leading lady/debutante Ginevra King served as source material for the character Daisy Buchanan in The Great Gatsby. Watching The Underclassman today, though, we are fully charmed by an evening of inventive and first-rate musical comedy ideas supporting a story that borders on the trivial. This can easily be excused at the Duke, where we get a supremely enjoyable production buoyed by the nifty score by Mr. Mills.
.
The Underclassman, a musical with music and lyrics by Peter Mills and book by Mills and Cara Reichel, opened November 19, 2014 and continues through November 30 at the Duke on 42nd Street