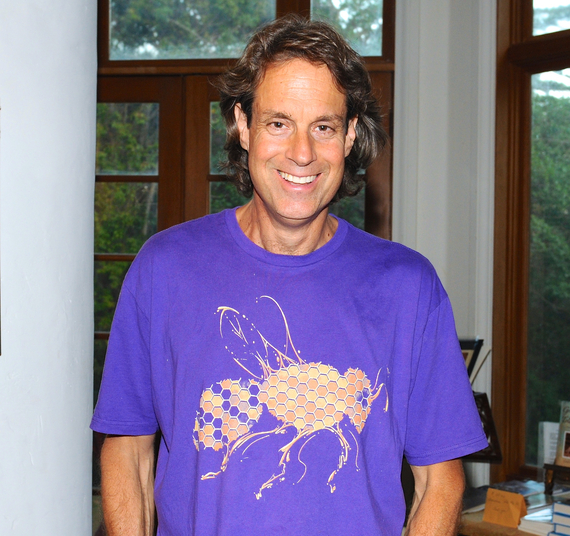 Acclaimed conservation biologist and environmentalist Dr. Reese Halter has been working diligently to spread the word that bees are our friends, not our enemies. He is a powerful voice for bees, trees and seas. Over 12 months (April 2015 to March 2016), 44 percent of our 2.4 million commercial hives have experienced the highest death rates ever recorded. "It's an epic commercial honeybee crisis," said Halter.

There are several reasons why, all man-made. "Bees are dying from introduced insects, bacteria, fungus and poor husbandry -- including being fed corn syrup instead of honey -- and the systemic use of chemicals called neonicotinoids (neonics) in pesticides," said Halter. "Neonics are in high concentrations in most home gardening products. They kill soil and water organisms. We know neonics kill bees, yet over two billion pounds of neonics are used globally each year."

Halter is adamant the end of bees would herald the end of man. "We need healthy bees to survive on the planet. Bees give us our food, our clothes (cotton), 450 million pounds of honey and nine million pounds of beeswax in America annually. Also powerful apis therapy and pain medicines for rheumatoid arthritis, fibromyalgia and multiple sclerosis. When the bees die, we die."

Almost one trillion bees have died needlessly since 2006. "If a bee comes into contact with neonics, they lose their minds and shake to death: Parkinson's and Alzheimer's. Those poisons kill everything in the soil. It doesn't end there. They poison the water for up to a decade, then all the birds who eat the worms and critters in the soil are denied food. Bird populations have also plummeted. We're missing one billion birds in North America alone. When the predatory birds' numbers plummet, all hell breaks loose and it's 'hello, vermin.' And on it goes."

Halter has been studying Colony Collapse Disorder (CCD) since it began in 2006. He wrote The Incomparable Honeybee in 2009. He says there are at least 20,000 varieties of bee with possibly another 20,000 yet to be discovered. He is also outraged that "Big Chem" and feed companies are "being allowed to run roughshod by poisoning the earth. Throw in the climate crisis and the planet is in grave danger of extinction," he says.

Neonics have been banned in many European countries, while the Environmental Protection Agency (EPA) "turned a blind eye," says Halter. "Finally this year, the EPA said there might be a problem with neonics, but haven't banned them."

We can all do our bit to help bees by avoiding pesticides with neonics. Instead, look for products from the Indian Neem tree. "Most bees are solitary creatures who quietly go about their business collecting nectar and pollen from sun up to sun down and turn it into the magical rocket fuel we know as honey," said Halter.

He says rocket fuel is a fair description, considering the power and energy found in honey. This liquid gold is a treasure chest of nutritional and medicinal values. Some of the bigger hives can house 100,000 bees. Halter said, "A beehive is an effective and efficient society with one queen who lays 1500 eggs a day in a colony that's 98-percent run by females. It's the perfect paradigm for the ultimate food industry with zero unemployment."

Another way to help the mighty bee is to leave fresh water out for them. "Bees get thirsty, just like us. In your yard, place a water bowl filled with marbles. Make sure some marbles poke above the water level, so the bees can perch on them and lap the water," he suggests.

If you have a deadly allergy to bees, Halter says stay away from areas with flowers in bloom. When honeybees sting they die. So bees don't look for humans to sting, stinging is a last resort for them.

And those insects that annoy us at picnics probably aren't even bees. "The buzzing at picnics is either flies or hornets. One simple trick is to place some food a little bit away from you, as a decoy. The insects will go there and leave you alone," said Halter.