The main difference between the most desirable plates of food in New York today versus those of 10 years ago is how beautiful they are.

One of the most sought-after dishes in New York in 2004 was April Bloomfield's ricotta gnudi at her West Village gastropub The Spotted Pig. It consisted of translucent pasta skins encasing a creamy ricotta filling, served up in a luscious brown butter and sage sauce. It's an iconic dish, still on the menu, transportingly delicious, but not much to look at. The gnudi are, well, beige and brown lumps.

If there's an iconic plate of New York food in 2015, it would be, first of all, a bowl, not a plate. And it might look like one of the preciously composed acaí bowls at Dimes, the chic Chinatown restaurant that serves up veritable set pieces of health food.

Dimes' improbable success is partly due to its sixth sense for photogenic dishes. I'd seen photos of its food some dozens of times on Instagram before I ever went to its unassuming Canal Street digs.

In her new book First Bite, the food historian Bee Wilson explains, "Once animals have been trained to love certain foods, the dopamine response can be fired up in the brain just by the sight of those foods," an effect demonstrated by experiments with monkeys and banana photos.

Wilson ostensibly wrote First Bite: How We Learn To Eat as a study of taste preferences and food habits, but it is really an economics book. Economics is the study of scarcity and choice. And though scarcity may be the last thing that describes our hyperactive food culture, we have a limited number of meals in a day, and days in a life, and the burden of choice is tantamount. Too much of the thinking around food focuses on the objects and environment of consumption -- what we might call the supply side. Wilson's ingenious turn is looking at our preferences -- the demand.

It's not for lack of information or advice that our food habits remain unsatisfactory, but that they are tough to translate on the level of our personal decisions. As she writes, in order to adhere to something like Michael Pollan's dictum of "Eat food. Not too much. Mostly plants," one must "Like real food. Not enjoy feeling overstuffed. And appreciate vegetables." Easier suggested than done.

Our Fetish For Taste

In the book's introduction, Wilson taps uncannily into a number of food anxieties. "Our tastes follow us around like a comforting shadow," she writes. "They seem to tell us who we are."

This is precisely why the food-visual culture complex is so pernicious, because it feeds our need for selfhood via preferences. As Wilson says, "Having particular tastes is one of the ways that we signal to other people that we are unusual and special."

The word "foodie" is meaningless today because our food choices are one of our main modes of relating to the world. Everyone (and no one) is a foodie. We all broadcast our consumer choices on social media and on dating app bios. How many Tinder bios include some phrases like, "loves: quintuple-distilled bourbon" or "avocado enthusiast," as if that tells a potential partner some deeper truth about oneself? These are symptoms of what Neal Gabler dubbed the post-idea world, where information, things and tangible goods are our intellectual currency.

Ironically, when preferences are so abundant, they are expendable. Knowing your favorite food tells me absolutely nothing about you. Your "likes" (without their counterpart dislikes, which don't exist in social media) are superfluous. Our investment in curating our consumer choices is inversely proportional to how much they matter.

The "paradox of choice" is the psychological anxiety caused by too much. Wilson's insight on how this applies to food culture is that "the challenge is not to grasp information but to learn new habits."

Wilson's exploration of food, choice and love is organized thematically into chapters like "Memory," "Disorder" and "Feeding," with a little vignette after each one dedicated to a particular food like birthday cake or beets. One of the vignettes on "birthday cake" astutely criticizes a flavor that I have long theorized owes its popularity to food photography, its only edge over other, tastier cakes (and non-cake applications) being its rainbow innards.

One of the book's running concerns is how children eat. How their parents and siblings influence their consumption, what children in different countries struggle to eat (radishes in France, okra in Brazil), and the issue of picky eaters. Children, with all their food problems, contain the answers for our predicament, suggests Wilson, because changing what you like (which we usually decide in youth) is the essence of changing what you eat.

"All the foods that you regularly eat are ones that you learned to eat" as a child, writes Wilson. But today, the "main influence on a child's palate may ... be a series of food manufacturers whose products -- despite the illusion of infinite choice -- deliver a monotonous flavor hit" of salt, sugar and/or fat.

For picky eaters of any age, Wilson recommends a program of "tiny tastes": trying pea-sized morsels of a problematic food, like broccoli, over several days until one starts to like it.

This utility of this issue may be lost on those who struggle not with picky eating but with liking and thinking about food too much. But in Wilson's account of preferences, picky eating and food obsession are actually closely related. The uniting force is to approach any diet changes from a place of likes, rather than dislikes (or deprivation). By reacquainting oneself of the pleasure of vegetables, moderate portions and regular mealtimes, we might become saner consumers.

Anyone with something other than a totally normal relationship with food -- picky children, food addicts, individuals suffering from eating disorders, chronic dieters -- can partake of the project to acquire "eating skills that can protect them in this environment of plenty."

Charcoal Hot Dog Buns with Chicago dogs are on the blog just in time for 🎃🎃🎃🎃 recipe on SpoonForkBacon.com 😎

The most surprising and edifying sections of First Bite revolve around picky eating, when Wilson writes on the endless mutability of the human palate. But the lessons are just as applicable to the opposite problem, overeating.

It's hard to resist scanning the leisurely volume for takeaways, even though she tried her best to design her book otherwise, with desultory chapters that pull from food history, anthropology, personal history and science. But in a conciliatory epilogue called "Not Advice," she provides some straws at which to grasp.

She herself evolved, she writes, from a dieter of the classic adolescent type into the kind of normal eater that would have infuriated her younger self. Although she pointedly rejects the idea of specific dietary advice, she repeats that eating well is a skill.

That's something to keep in mind as we navigate the lucid dream of our modern food world. Nothing about it is natural; it's designed to short-circuit the wisdom or intuition with which we may have been born. But having relieved ourselves of the burden of intuition, we can shift our efforts to behavior, which Wilson emphasizes can be changed. We might learn to stop seeking out food blogs, for instance, or limit our time on Instagram, or start to reframe food-pornographic content as "white noise," the way we learn to tune out sexy advertising by the time we're teens.

The big mistake would be to just surrender to our "environment of plenty." Wilson's book teaches us that the notion of "I can't help but to like/eat/be seduced by" certain foods is wrong, because our tastes are not fixed.

So our preferences, which got us into this mess, may yet get us out.

PHOTO GALLERY
The Best Food Things That Happened In 2015
Download
Calling all HuffPost superfans!
Sign up for membership to become a founding member and help shape HuffPost's next chapter
Join HuffPost 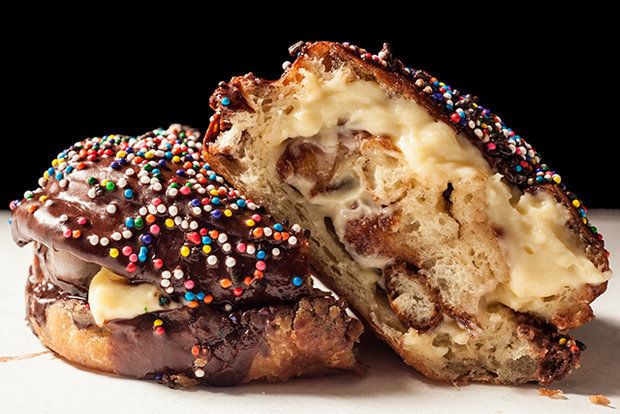 1 / 23
The Turducken Donut Killed Our New Years Resolutions
Our new years resolutions were over before they ever&nbsp;had a chance, <a href="https://www.huffpost.com/entry/turducken-donut-fritter_n_6424160">thanks to the temptress</a> invented over at the Chow test kitchen -- a chocolate, sprinkled donut stuffed with a fried apple fritter.
Chris Rochelle/Chow.com