Expert data nerd Stephen Von Worley has created Beefspace, a great visualization that depicts the density of major fast food chains across the country. Using information from AggData, Von Worley assigned each fast food chain a different color and then plotted the locations.

Here's how he explains his method:

The colors now represent the three most influential chains at each point, weighted by cumulative force at a 4:2:1 ratio, where black is McDonald’s, red Burger King, yellow Wendy’s, magenta Jack In The Box, periwinkle Sonic, cream Dairy Queen, green Carl’s Jr., and cyan Hardee’s. Together, you can think of these tweaks as elegantly exposing the subtle contours of market dominance, then splattering them with the individual restaurant locations

Basically, if you're seeing anything with dark tinges, it means there's a McDonald's present. (And here's a map by Von Worley of the concentration of McDonald's alone).

Here's what he ended up with: 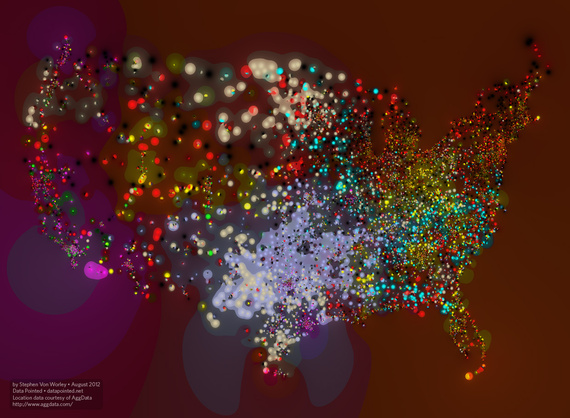 On his website, he zooms in to certain areas of the country. It's a strangely beautiful take on fast food.