The story of Beelzebub, initially known as Baal, a pre-biblical god worshipped in the Middle East, furnishes illuminating insights into how gods may reign, fall, and be resurrected. The story also tells how nations and communities fight each other not only for land, resources, and domination but also how they fight over the sources of spirituality, presenting their own gods as authentic deities and condemning other's gods as false, dark, and perverted idols. In warfare, killing a beloved leader disheartens the community but rubbishing a beloved god leaves the community utterly disoriented and confused.

Demonizing the enemy's deities and demolishing temples built for the deity is an ancient form of religious warfare. In 586 BCE, the Babylonians, the devotees of Bel, another name for Baal, destroyed the Solomon's Temple in Jerusalem. During crusades, the Europeans not only aimed at conquering Jerusalem, they also discredited Allah as a false god -a war tactic that inspired the annihilation of a "spiritually inferior" but militarily powerful Islamic empire. Starting in the 8th century CE, the Afghan raiders invading into India not only looted the gold from Hindu temples, they also condemned Hindu gods and goddesses as irrational deviations from one true God. In 2001, the Afghan Taliban destroyed the 1700-year-old Buddha statute in the Hindu Kush. In 2015, the Islamic State (ISIS) demolished the Temple of Baal in Palmyra, Syria. 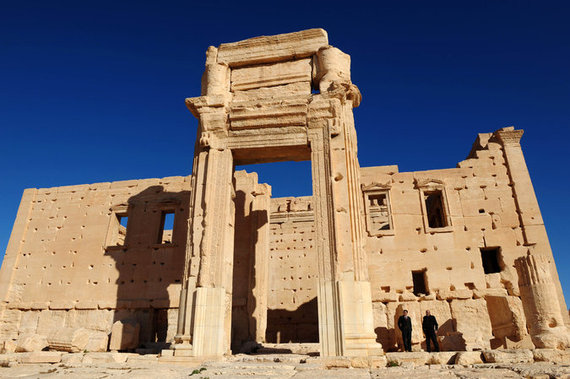 Before the rise of Christianity and Islam as worldwide religions and before the ascendancy of One God as the sole sovereign of the entire universe, deities were territorial and limited in what they could do. The gods of Athens had little power over Egypt and the gods of Mesopotamia had slight influence over India. For centuries, communities in Africa, Asia, and the Middle East had their own tribal gods, with local names and modest powers. Recognizing the petty powers of diverse deities, Buddha could rightfully claim that humans carry the potential of being superior to gods, a thesis that died with the ascent of an omnipotent One God.

Baal was by no means a universal god. Yet Baal was much more than a local god, more imperial than Apollo or Zeus. Baal was the king of gods. Baal's influence extended over the Assyrians, Mesopotamians, Canaanites, Phoenicians, Egyptians, Greeks, and early Hebrews. Even before Moses inaugurated Yahweh as the god of Israelites, and centuries before the initiation of Christian Jesus and Islam's Allah, the supreme god worshipped in the Middle East was Baal. The worship of Baal was widespread in Egypt as far back as 1400 BCE. Baal entered the Greek pantheon as Belus, with divine links to Mesopotamia.

Baal means lord in Semitic languages, including Hebrew and Arabic, though other meanings are also associated with the word. Baal, much like Lord, was not merely a general noun. Baal was a specific name of a living god with explicit powers. Like a universal god, Baal was much more complex than a mono-dimensional deity. In rain-starved deserts, Baal was associated with dew and rain and the people prayed Baal for rain showers. In some areas, Baal was worshipped as the god of fertility because rain revives the earth, causing vegetation to sprout and grow. In coastal communities, Baal was the god of sea storms and the people begged Baal for safety from hurricanes and other furies of the sea. Baal was also seen as a god that thwarts Mot, the god of death. The people prayed Baal for the extension of life and the cure of diseases. All in all, for centuries, Baal was a good god with beneficial characteristics.

Baal: The Lord of Flies

Powerful waves of spiritual warfare rose against Baal that would tear him down and turn him into an arch-demon, an antithesis to God. The attack on Baal came through the writings of the Old Testament, primarily to discourage Hebrews from worshipping Baal and unifying them under the sole sovereignty of Yahweh. Sexual perversities of a group of Hebrews committed on the mountain of Peor were attributed to the worship of Baal. The Hebrew Bible itself provides evidence that many Jews were worshipping Baal. "So Israel yoked himself to Baal of Peor. And the anger of the Lord was kindled against Israel (Numbers 25:3)." The Bible institutes capital punishment to bring worshippers back to Yahweh. "And Moses said to the judges of Israel, "Each of you kill those of his men who have yoked themselves to Baal of Peor (Numbers 25:5)." Jews worshipping Baal were indeed destroyed. "Your eyes have seen what the Lord did at Baal-peor, for the Lord your God destroyed from among you all the men who followed the Baal of Peor. (Deuteronomy 4:3).

Thus, Baal worship was criminalized and Baal was associated with sexual perversities. For believers, however, Baal was still a good god of rain and fertility and safety from sea storms. To further bring down the majesty of Baal, the opponents started to ridicule the name of Baal. For centuries, Baal had been known as Baal-alzabul, which means the Lord of High Place. This name was changed to Baal-alzabub (Beelzebub), which means the Lord of flies. Because flies gather around dung and other filth, the worshippers of Baal were degraded to flies and Baal, the good god, was correlated with dung and filth.

By the time the New Testament was being written, Baal had been firmly associated with dung, filth, and sexual perversities and was known as Beelzebub in Hebrew circles. During the ministry of Jesus, a controversial question arose whether Jesus summons the powers of Baal to perform the expulsion of demons or whether Jesus commands inherent godly powers to do so. "But when the Pharisees heard it, they said, "This fellow doth not cast out devils, except by Beelzebub, the prince of devils." Mathew 12:24; Mark 3:22; Luke 11:15. These charges were designed to discredit both Jesus and Baal, who had been degraded to the lord of demons.

The spread of Christianity and the reading of the gospels brought down Baal from the status of god and turned him into a demon, Satan's comrade. Baal as the chief of demons began to be firmly rooted in Biblical and non-Biblical literature as Beelzebub entered almost all translations of the New Testament. Beelzebub is one of the seven princes of Hell in Catholic demonology. In John Milton's Paradise Lost, Beelzebub is presented as a sagacious companion of Satan. "Knock, knock, knock! Who's there, i' the name of Beelzebub?" is a legendary line in Shakespeare's Macbeth, a demonic contriver conceived in the spirit of Beelzebub.

In the 7th century BCE, when Islam was pioneered in the Middle East, Baal was no more than a repudiated historical idol. The Qur'an mentions Baal just once in the context of Elijah instructing his people not to worship Baal. "Will ye call upon Baal and forsake the Best of Creators?" (Quran 37:125). However, the remnants of Baal have remained in the Islamic Middle East in the form of old temples devoted to the fallen deity. As noted above, the ISIS destroyed a temple in Syria, which had been built to honor Baal. Muslims all over the world pray for rain but the prayer is made to Allah and not Baal. To renounce any lingering qualms about the relevance of Baal, Sura al-Waqia of the Qur'an makes it clear that Allah is the sole authority that provides fertility to the seeds sown in the earth and He is the one who sends rain from the clouds and He is the creator of life and death (thus rebutting existence of the deity known as Mot). This Sura shifts the powers once associated with Baal to Allah (56:60-70).

The story of Baal is far from over. The New International Version of the New Testament replaces Beelzebub with Beelzebul, rejecting the implications that Baal was the lord of flies and restoring the original characterization of Baal as the Lord of High House. Ideas are floating in rain-filled clouds that a Temple of Baal should be erected in New York City to resurrect the ancient temple that the ISIS has destroyed in Palmyra, Syria.