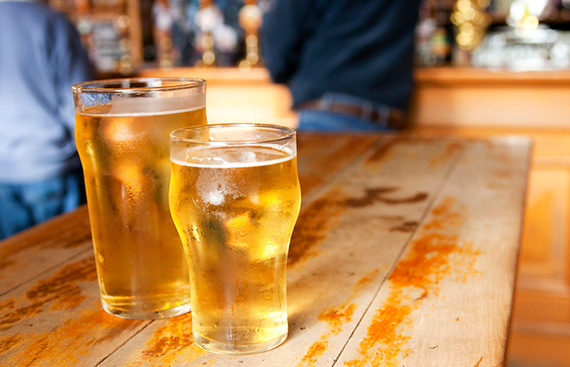 By Kamal Patel for Life by DailyBurn

Kamal Patel is the director of Examine.com, and is a nutrition researcher with an MPH and MBA from Johns Hopkins University on hiatus from a Ph.D. in nutrition. He has published peer-reviewed articles on vitamin D and calcium as well as a variety of clinical research topics.

Even the most dedicated athletes need time off to unwind. While partying usually results in nothing worse than a hangover, you may have also noticed that your Monday morning gym session feels harder after a weekend of indulging. While many people extol the virtues of the post-workout beer, it can be difficult to determine what effect alcohol actually has on muscles.

Some research shows that alcohol can impact your rate of muscle protein synthesis -- the process by which muscles grow and repair. But could a post-workout drink (or two) really undo the effects of your reps and sets -- or will it take way more than that to truly set you back? Read on to find out.

Breaking Down the Post-Workout Beer

Beer, like many sports drinks, contains carbohydrates and electrolytes. But does that mean it could replace a Gatorade? Not so fast.

Two relevant studies published on this topic compared liver protein synthesis rates -- the detoxifying enzymes produced by the liver -- among people consuming various quantities of alcohol. Scientists found that the rate of synthesis changed based on the amount of alcohol ingested. Protein synthesis was suppressed by 24 percent after people consumed 71 grams of pure alcohol, or approximately five beers. However, it was not suppressed after people consumed just 28 grams of alcohol, the amount found in about two standard beers.

The most relevant human study to date found that for a 150-pound person, consuming the equivalent of about seven beers resulted in suppressed muscle protein synthesis. This occurred even if the alcohol was consumed after 25 grams of protein (see what 25 grams of protein looks like here). In other words, your post-happy hour munchies won't help. Animal studies also provide supporting evidence; muscular protein synthesis rates in rats were suppressed after they received ethanol injections.

Overall, this evidence suggests drinking upwards of five beers in one sitting could impair workout recovery and muscle growth. There are no studies specifically investigating the impact of a single beer post-workout. But those who love a good post-gym drink will be happy to know evidence suggests drinking about two of your favorite brews won't undo your hard work at the gym.

Testosterone is also important when it comes to building muscle -- the more you naturally have, the easier it is to see gains. Low doses of alcohol (about two beers for a 150-pound person) have been shown to increase circulating testosterone by about 17 percent in both young men and premenopausal women. Unfortunately, this boost in testosterone is probably not enough to noticeably increase muscle growth.

On the other hand, heavier drinking (think: seven beers for a 150-pound individual) has been found to suppress testosterone. Furthermore, even moderate amounts of booze (about three to four beers) have been shown to mildly suppress testosterone when ingested daily for at least three weeks. And that could be enough to undo some of your efforts in the weight room.

Beer lovers, rest easy. Though more research is needed, there is currently no evidence to suggest a post-workout beer or two can cause long-term harm. If a tall one is your go-to treat after a hard workout, you don't need to worry about your testosterone levels or protein synthesis rates. Just make sure your one-beer reward doesn't turn into a five-beer habit.

More from Life by DailyBurn:

How Bad Is Booze, Really? 6 Crazy Facts About Drinking Alcohol

Is It Better to Do Cardio or Strength Training First?

19 Reasons to Work Out (Beyond the Perfect Body)