What do beer bottles, ocean currents and oil tankers have to do with one another? As part of an effort to understand ocean currents, and how they would influence the movement of a potential oil spill, scientists from the Institute of Ocean Sciences (IOS) recently teamed up with the Gitga'at First Nation and the Raincoast Conservation Foundation to drop "drift bottles" into the Pacific Ocean just off Gil Island, near the coastal community of Hartley Bay, British Columbia.

Aboard Raincoast's research vessel Achiever, the first stage of our trip to Hartley Bay from Bella Bella had been auspicious with brilliantly sunny skies and the sighting of an elephant seal a harbinger of good things to come. En route, successive pods of Pacific white-sided dolphins and Dall's porpoises enthusiastically escorted us, bow riding and playing in the sparkling ocean waters. Energized by their prolonged engagement, we were literally dancing on the foredeck.

Five hundred glass bottles, donated by Lighthouse Brewing Company in Victoria, were safely ensconced down below on Achiever, each carefully prepared by the research team at IOS. Glass bottles are the preferred tools of the trade because they do not impact the marine system the way plastic does, and are easily spotted by curious beachcombers.

"The world shares one ocean," says IOS oceanographer Dr. Eddy Carmack, "Despite the distance between shores, ocean currents form pathways across the globe. A bottle dropped at sea and carried by currents can wash ashore anywhere in the world, as can spilled oil or pollution. To protect our ocean, it is important to understand these currents."

To help gain an understanding of the aforementioned currents, school children from Hartley Bay dropped the 500 drift bottles from Achiever into Wright Sound the following day, each containing labels and contact information. The bottles will be carried by the currents and eventually wash ashore. Many will wash up locally, others regionally, and some may travel through the open Pacific, washing up on other continents. As Raincoast's Achiever captain Brian Falconer points out, "We are going to need the public's help, from boaters to community members, in gathering the information. When people find the bottles washed on shore, they need to log their location and report the bottle." 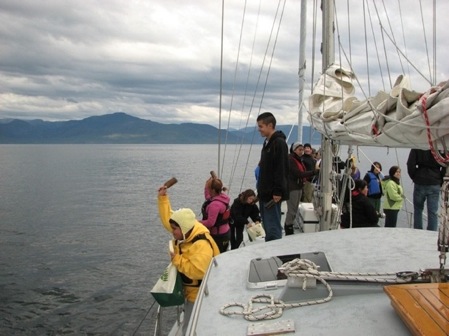 We chose this area to drop the bottles because it is a fascinating region in terms of oceanography and ecology. In addition, it would be the entrance and exit point for oil tankers traveling to and from Enbridge Inc.'s proposed marine terminal in Kitimat if the company gets approval to construct a twinned pipeline from Alberta's tar sands to the north coast of BC. The information gathered from the bottles will have direct relevance to understanding the consequences of an oil spill posed by the Enbridge Northern Gateway Project.

The bottle drop, as reported by Postmedia News, will help "underscore how poorly understood the currents are off the rugged (BC) coast and the danger posed by plans to ship Alberta's crude oil to Asia and the United States," according to Ernie Hill, who is principal of the school in Hartley Bay and also a Gitga'at hereditary chief. An estimated 225 supertankers, the size of the Exxon Valdez and larger, would ply BC's coastal waters on an annual basis if Northern Gateway is approved.

The day of the drop was absolute magic; as the kids tossed the bottles into the water we counted twenty humpback whales in Wright Sound breaching at various intervals. Then, after the bottle drop was complete and Achiever continued to sit stationary with the engine off, two very large humpbacks approached the boat and for a full hour they put on the most amazing show one could ever imagine. The whales frolicked around and underneath the boat, displaying their tail flukes, lobtailing, blowing at the surface and showering us with their misty breath, and repeatedly spyhopping so close to the boat that we literally could have reached out and touched them.

The synchronicity of the drift bottle drop, carried out by the Hartley Bay community's youth, with the appearance and display by the humpbacks was not lost on any of us. In fact, given the threats facing BC's north coast from proposed oil development and transport, the symbolism sent shivers up our spines.

Update: The first drift bottle has now been found at Sandspit on the east coast of Haida Gwaii - a crossing of over 100 nautical miles in approximately 65 days.

A version of this article previously ran in the Island Tides.