Last week Gallup released their annual alcohol survey. Despite numbers that were quite similar to those in recent years, the presentation of this data -- including Gallup's own sub-header: "Younger drinkers most likely to have shifted preferences away from beer" -- has led to a number of quasi-apocalyptic headlines for beer, including one outlet calling it "The Stunning Collapse of Beer in America."

Certainly sensationalized, the headlines could have easily (and truthfully) been replaced by the following: "Beer Remains America's Preferred Alcoholic Beverage" and "Young drinkers still prefer beer over wine and spirits." Summarizing the 2013 data, Gallup even states: "Despite these changes, beer remains the preferred beverage of 18- to 29- and 30- to 49-year-olds. Wine continues to rank as the top choice of those 50 and older." The survey found that 41 percent of 18- to 29-year-olds prefer beer, versus 24 percent for wine and 28 percent for spirits.

This type of survey data released by Gallup provides little evidence of what is really going on with consumers in the beer category. The truth is that the end is not even close for beer. If anything, we're in the throes of the greatest beer renaissance since before Prohibition. There are now more breweries in the U.S. (2,538 as of June 2013) than at any point since the 1870s.

The Craft Beer Segment
Aggregating all beer misses highly dynamic sub-segments, particularly small and independent craft brewers. The output of craft brewers grew 15 percent by volume and 17 percent by dollar sales in 2012, helping the overall sector see positive growth on the year. Craft's rise continued in the first half of 2013, up 13 percent by volume and 15 percent in dollar sales. This growth isn't a blip, but follows sustained, exponential 9 percent annual growth spanning more than a decade.

These brewers are benefiting from a shift in demand toward more full-flavored beers. Any decline in beer consumption could be a result of consumers not being able to find as many full-flavored beers as they are demanding, rather than beer lovers actually leaving the segment.

Even outside the craft segment -- although it's hard to argue that the overall beer market is in a stronger position than it was in 1992 -- reports of beer's death have been greatly exaggerated. For one, in 2012 the entire beer category grew by one percent. That's amazing, considering it's a $99 billion dollar category that dwarfs both wine sales ($34.6 billion) and spirits sales ($69.5 billion). 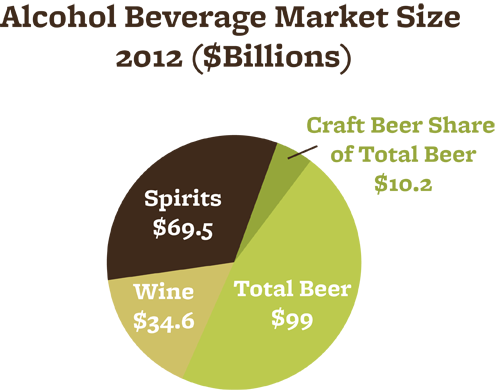 Understanding the Gallup Poll
Gallup's data reinforces a classic lesson from statistics: survey data does not always capture the true values it is trying to measure. Surveys are susceptible to numerous biases or systematic shifts in the direction of the data. In this case, there is ample evidence that the Gallup poll is biased in favor of wine and away from beer.

When looking at the percentage of beverage alcohol consumed in 2012, beer accounted for around half the U.S. market (49.2 percent), whereas wine was only 17.8 percent. In 2012, wine consumption per capita (for 21+ adults) was 3.8 gallons per year. For beer, it was 28.2 gallons (Source: Beer Institute). Both statistics clearly show beer consumption as much higher than wine. Yet, in the 2012 Gallup poll, beer narrowly squeaked out a 39 to 35 percent margin (beer to wine) in what consumers reported drinking most.

Dealing with Data
So why does beer do so poorly and wine do so well in the Gallup survey? One possibility is that those who say they consume more beer consume a lot of beer, whereas those who say they consume wine typically consume less. Or maybe those who prefer beer tend to stick to beer, while wine and spirits drinkers consume across multiple categories. After all, the majority of fermented beverage sales come from American adults who drink across all three categories (beer/wine/spirits-Nielsen).

Another possibility is known as social conformity bias: put simply, people often misstate their preferences to pollsters. Despite their anonymous nature, researchers have long known that survey respondents tend to answer in what they deem socially-preferable ways. So, if respondents think they are "supposed" to prefer wine over beer, they may say they do -- or they may not. What would you say if answering a dinnertime phone call from Gallup with both beer and wine in the fridge or on the table?

Additionally, even when correct, data can show lots of things. Yes, two data points can be a trend, but they can also be statistical noise. For example, did you know that, according to Gallup, wine is down four percentage points since 2005, and liquor is down one point since 2004? Part of the challenge of looking at time series data involves understanding how it should be broken up. In this case, comparing 1992 to 2012 probably doesn't make the most sense in describing the data.

Beer has remained largely static in the Gallup poll since 2004. If we assume a period average since then of 39 percent (average based on ten years of data), every year from 2004-2013 falls within the poll's margin of error (+/- 3 percent), including 2013's 36 percent. This means that statistically, it's pretty hard to separate 2013 from any of those years. Comparing year-on-year polls doesn't make a ton of sense (unless beer moves outside the 36 to 42 percent range), even if it does generate good headlines. Comparing 1992 to 2004 may make plenty of sense -- but comparing 1992 to 2013 misses beer's flat trajectory for a decade of polls.

All numbers aside, walking in to your local bar, restaurant, brewpub, brewery tap room or retail store, it's pretty clear that beer is thriving in the U.S. With so many great beers coming on-line in recent years, there has never been a better time to be an American beer lover, and I think we can all raise a toast to that.

Julia Herz, Craft Beer Program Director for the Brewers Association, is a homebrewer, BJCP beer judge and Certified Cicerone™. Despite her extensive experience, she will always consider herself a beer beginner on an unending journey to learn more about craft beer. Keep up with Julia at @HerzMuses.

Bart Watson, Staff Economist for the Brewers Association, is a stats geek and beer lover. He holds a PhD from the University of California, Berkeley, where he took full advantage of the plethora of Bay Area brewpubs.