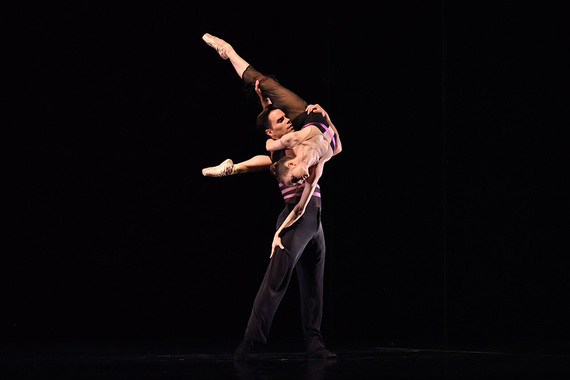 Baseball season opened with a bang on Monday. The San Francisco Giants crushed the Milwaukee Brewers, hitting back-to-back-to-back homers for only the 10th time in the team's history, and the first on an opening day.

24 hours later, San Francisco Ballet opened its Program 6 with a triple bill of Tomasson, Ratmansky and Wheeldon but the evening's home runs were hit by the musicians rather than the choreographers. The glamorous Mungunchimeg Buriad sent one whistling from the grand piano onstage at the War Memorial Opera House clear out to Van Ness Avenue, carried aloft on the limpid measures of Domenico Scarlatti. Roy Bogas in the pit, reinforced by the stalwart San Francisco Ballet Orchestra, swung at Beethoven's Piano Concerto No. 1 with dazzling virtuosity. And the orchestra dispatched Bohuslav Martinů's gloriously nuanced Sinfonietta La Jolla with verve and style. 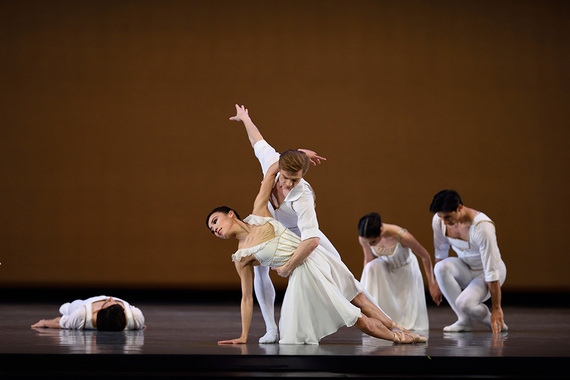 The program was narrative-free, though Alexei Ratmansky's Seven Sonatas hinted at deeply conflicting emotions, even scandal, underneath the restrained Scarlatti. Three couples - all delicately costumed in white of an indeterminate period somewhere between the Edwardian and the millennial - danced singly, in pairs and trios. They were people, but they were also ideas about people, perhaps political ideas. Footwork was fleet, sometimes impish, at other times desperate. Frequently, a dancer would head in one direction only to be thwarted by another.

The choreography was a mash-up of playful childhood games, fraught gestures, and classical ballet steps. In a witty nod to the Italian composer, Ratmansky employed the gracious, lighthearted Italian assemblé - in which the dancer bends the knees and pulls them up in mid-jump, keeping the feet together - as a signature step.

With the exception of the ardent, impetuous Davit Karapetyan and Vanessa Zahorian, a woman of mysterious depths, the principal characteristic of the rest of the crew was that of implacable efficiency. Mathilde Froustey cycled between petulant and flirty, repeatedly pushed by unseen forces to the verge of nervous breakdown in her duet with the sympathetic Joe Walsh. Whirling dervish Frances Chung wore a wooden smile during her cat-and-mouse shenanigans with the capable Gennadi Nedvigin; at other times she was a cipher.

At the somber close, the three couples fell to their knees. The women then keeled over, the men leaned on the women and bowed their heads in apparent grief. It was more puzzling than moving. 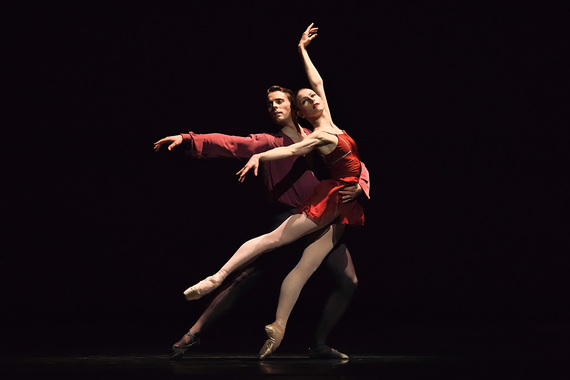 Helgi Tomasson's Prism opened inauspiciously with the fiddly partnering of a trio set to the first movement of the Beethoven. The celestial music simply did not fit the jaunty, off-balance neoclassical machinations, and though the radiant Sasha De Sola danced as if she didn't need any support at all, her anxious squires Vitor Luiz and Carlos Quenedit kept trying to insist that she did.

The second and third movements, however, seemed to flow miraculously from the stirring score. Considerable aerobic demands were placed on the vast ensemble, costumed like a field of poppies, most especially the golden California poppies that are running riot alongside our freeways after the copious March rains.

The intoxicating Sofiane Sylve reigned over the elegiac second movement in the vivid poppy red of Flanders fields. In the spring of 1915, these red poppies carpeted the otherwise desolate battlefields of Belgium, France and Gallipoli, and became a symbol of the massive loss of life in the first World War. Blown by the wind (a noble and unobtrusive Luke Ingham), mirrored by a corps barely visible in the smoky gloom so exquisitely constructed by lighting wizard Mark Stanley, Sylve's piercing sorrow wafted through the opera house.

Our spirits were lifted in the boisterous final movement as Taras Domitro tossed off his signature turning split jumps like a stag romping in a meadow of wildflowers. A madness of cabrioles spread like wildfire among the male ensemble while the women échappéd deliriously. The regal Sylve and Ingham returned for a glorious sequence of slashing lifts, and all thoughts of war were banished by curtain fall. 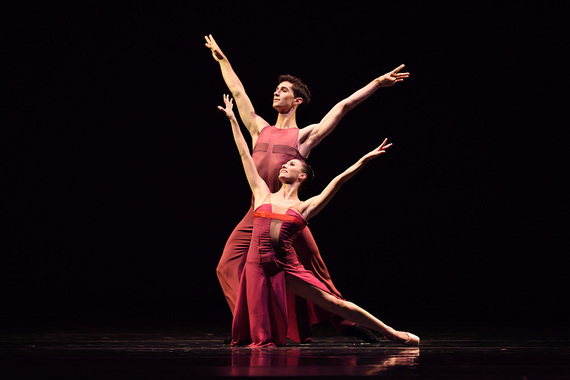 The structure of Christopher Wheeldon's Rush© closely resembles that of Tomasson's Prism, with a slow, sensuous pas de deux sandwiched between two frantic outer movements. Program notes tell us the Czech composer was inspired by "the California sea and sky" but Wheeldon's concept appears inspired by southern California traffic, judging from the grandiosely copyrighted title and the choreography.

The sensational up-to-the-minute costume designs by Jon Morrell feature a bold geometric slash down the front of the women's dresses. Isabella de Vivo and Myles Thatcher in teal blue went for broke, attacking the highly kinetic choreography with great daring.

The second movement takes us on a detour into a temple where the backdrop glows like a deep red Rothko. Maria Kochetkova and Joan Boada execute a sinuous, yearning duet with competence. In an ominous development, Kochetkova, who at first gave signs of wanting to take her relationship with Boada to the next level, leaves him for dead on the side of the road.

Back on Interstate 5 for the final movement, the fearless Formula 1 drivers Jahna Frantziskonis and Lauren Strongin make some thrilling banked turns off the chests of two obliging young men. In the most beautiful sequence of the ballet, three couples execute unison lifts in which the women repeatedly switch their arabesque leg in the air, land delicately on pointe with hovering arms and gracefully inclined necks, but are swept into the air again. Their agile maneuvers resemble the heart-stopping landing attempts of fighter jets on the flight deck of an aircraft carrier.

A box score of Prism and Rush© would reveal some impressive stats on the number of beaten jumps and other virtuosic plays crammed into one evening. One might even worry (as one worries about Madison Bumgarner's pitch counts) about the wear and tear on the dancers. But the first-rate athletes in Program 6's starting lineup looked invincible.