"Music is a higher revelation than all wisdom and philosophy. Music is the electrical soil in which the spirit lives, thinks and invents."
― Ludwig van Beethoven

Alas, I can only enjoy him (and oh, do I ever) through listening to my collection of CDs, by watching one of the Hollywood versions of his life ("Immortal Beloved" comes to mind), or catching an occasional string quartet, piano concerto, or -- my all-time favorites -- one of his nine symphonies on the only classical music radio station remaining in the New York City area -- WQXR. 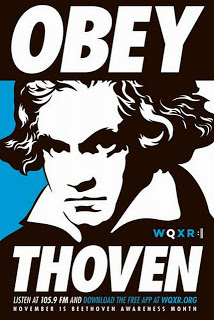 A creature of habit, I rarely vary my routine: wake up at 5:30 a.m., stumble to the kitchen to turn on the Nespresso machine and radio (such a quaint little thing) simultaneously and sit down with my laptop to find out what happened in the world while I was sleeping. Because I work from home, the radio stays on until I go to bed. Even when I leave for meetings and appointments, my dog has the dreamy and often melancholy sounds of Brahms and the drama of Verdi to keep him company until my return.

My husband of almost twenty years has come to not only accept this quirk of mine, but to enjoy it. My youngest daughter, a freshman in high school, does her homework at the kitchen table with Mozart and Chopin serving as "background noise." A college freshman, my oldest daughter recently admitted to plugging classical music into her ears while studying in the library. She finds it soothing and a "connection to home." Both daughters grudgingly admit to knowing way more about the great composers than any of their friends (a dubious achievement in their minds, but something of which I am quite proud). And of course, Beethoven is their favorite.

In 2011, WQXR proclaimed November "Beethoven Awareness Month" which was such a huge success they did it again this year. All month long they've presented Beethoven marathons, snippets of his masterful symphonies and little bits of Beethoven trivia interspersed throughout the day. For a groupie like me, it's been a magical month.

Beethoven should be adored for his music alone, of course. But there are many other things that make him rock more than any other great composer.

Inspired by WQXR's celebration of 'all things Beethoven,' I pulled together a short list of reasons we should be thankful for Beethoven this month... and all year long.

Here are just a few:

That wild and crazy hair: We usually think of Einstein as the genius with the most memorable hair, but Beethoven is the clear winner for a few other reasons. Not only did it look as dramatic as most of his compositions, but it truly had a life all its own. After his death in 1827 at age 56, some people stole snippets of it during his funeral. There are many stories surrounding a specific lock of Beethoven's hair that found its way from Vienna to the United States, but the most remarkable thing was scientists were able to determine what most likely caused Beethoven's constant abdominal pain and other maladies, including depression. For starters, DNA testing showed his hair contained huge quantities of lead -- more than 100 times the normal average -- leading experts to believe he probably had lead poisoning. Now if we could only figure out how to build new Beethovens with a few strands...

He wrote No. 9 after 50: Beethoven's arguably most well-known and best-loved symphony was composed when he was completely deaf and in his early 50's, making him the official poster child for the post-50 generation. Symphony No. 9 in D Minor, Op. 125 "Choral", commonly referred to as "Ode to Joy" (which is only one part of this masterpiece, and was inspired by a poem written in the 1790s by Friedrich Schiller). Beethoven, who conducted the world premiere in Vienna on May 7th, 1824 when he was 54 years old, didn't realize the audience was applauding wildly, as his back was to them and he could no longer hear, prompting a soloist to turn him around so he could witness one of his greatest triumphs.

He stood up to Napoloeon: Another masterpiece (did Beethoven compose anything else?), Symphony No. 3, Op. 55 "Eroica", was originally titled "Bonaparte Symphony" in tribute to Napoleon, whom Beethoven at first believed to be a kindred spirit in regards to embracing equality and freedom. However, when Napoleon ripped through Europe, bullying everyone in his path and eventually crowning himself emperor, Beethoven was outraged, thinking the leader had become a tyrant. Beethoven quickly crossed out the title and renamed it Eroica. This made Napoleon feel quite small, indeed. Interesting trivia tidbit about "Eroica": Alfred Hitchcock incorporated the symphony in one of his most famous movies, Psycho (look for the record on the gramophone in the scene where Janet Leigh's sister is searching for her in the house behind the hotel).

He could have (should have) won an Oscar: Who among us was not incredibly moved by the scene where the newly crowned King George VI made his wartime speech to the heightened drama and majesty of the second movement of Beethoven's Symphony No. 7 in A major, Op. 92, which was composed in honor of a battle (led by Napoleon's brother) the British fought against the French. The scene is so stirring it's hard to turn your ears away from the music and focus on the words. Toward the end, when the royal family greets and waves to the adoring crowds outside the palace, another masterpiece is played: Beethoven's Piano Concerto No. 5, Op. 73 "Emperor." He so permeated this movie, Beethoven should at least have won an Oscar for Best Supporting Actor.

He makes us swoon with "Immortal Beloved": After his death in 1827, letters to someone he referred to as "my angel, my all, my very self" were discovered and have mystified Beethoven scholars ever since. Who was this woman who possessed his heart and soul so desperately and whom he wanted to marry? There's no proof that he was sexually involved with his 'Beloved,' yet she was clearly the object of his desire. Many women have been put forth as possibilities over the years, but the riddle will probably never be solved. One thing we know for sure: Beethoven never married, but experts believe he fathered at least two children. The three-part love letter was signed, "Ever thine, Ever mine, Ever ours." Check the movie by the same name for a romanticized but very effective exploration of this mystery.

His best ideas came to him when he exercised: I've written about how running puts me into a zen-like state, mentally unencumbered by conversation, technology, reading or much of anything. Apparently, Beethoven felt this way about walking, and became famous in Vienna for regularly taking long strolls around the city and exploring the neighboring woods. In fact, my favorite piece of music -- Symphony No. 6 in F major, Op. 68 "Pastoral" -- was inspired by his walks in the country. It seems he instinctively understood the connection between exercise and creativity. A man ahead of his times.

He was immortalized in a cartoon strip: In his own words, the creator of the Peanuts characters, Charles M. Schulz, became an ardent admirer of Beethoven early on in his career:

Having been fascinated for several months by Strauss waltzes, I graduated one day to the purchase of Beethoven's Second Symphony, and I remember that this record opened up a whole new world for me.

Since 1951, Schroeder, one of the Peanuts' characters, channeled the genius of Beethoven through his toy piano. Most scenes of Schroeder find him bowed over his piano on the floor, playing incredibly complicated compositions and woe to anyone who doesn't know it's Beethoven he's playing. I first learned about Beethoven by reading the Peanuts cartoon strips in the newspaper my grandfather brought home, and then the books Schulz published which I collected as quickly as I started collecting Beethoven records. Schroeder was so obsessed with Beethoven he once asked no one in particular, "How can anyone be Beethoven and not be happy?." Thanks to Schulz and Schroeder, I was hooked.

Oh, I could go on and on about Beethoven. But I won't because WQXR is about to play "Fur Elise," which wasn't written for anyone named Elise, according to the radio station, but for a woman whose name was misread due to Beethoven's hard-to-read handwriting. Another romantic mystery.

Perhaps you think Mozart, Mahler or some other musical genius deserves an "awareness month" and our undying devotion. Of course, they all deserve special places in our hearts for bringing such beauty to the world. But in the final analysis, it is Beethoven... and it's only ever been Beethoven. After all, as he himself once said, "There are and will be a thousand princes; there is only one Beethoven."

For more information and reasons to love Beethoven, click here.
* * *

For more tips on living your best life after 50 visit www.bestofeverythingafter50.com. Staying connected is a powerful tool! Keep me posted on how you're doing by subscribing to me on Facebook and "tweeting" me on Twitter at @BGrufferman. Check out my weekly columns on AARP and FOF, too.