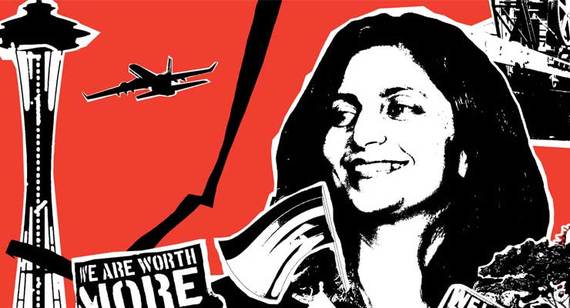 City Council of Seattle Member Kshama Sawant spent her first two years in office combating city wide rent increases and playing a central role in pushing for a $15 minimum wage, which was a cornerstone of her first election campaign in 2013. Los Angeles and San Francisco soon followed suit in passing $15 minimum wage bills and several Democrats around the country, including Democratic Presidential candidates Bernie Sanders and Martin O'Malley have incorporated it into their campaign platforms.

Despite her successes, Sawant's anti-establishment rhetoric hadn't won her many friends within the local Democratic Party. The Democrats put all of their resources behind Seattle Urban League Director, Pamela Banks, in the City Council election this year for Sawant's seat. Six of her eight fellow council members endorsed her opponent, and Seattle' major media outlet, the Seattle Times endorsed Banks as well.

After election night, the results came in with Sawant taking a clear lead over her opponent. In her victory speech she endorsed Bernie Sanders and was described by the alternative Seattle publication The Stranger, as SuperHero-like; "one could not help but notice that the long yellow scarf she wore looked, at certain angles, very much like a superhero cape."

In many ways, her political successes have been heroic to the city of Seattle. A software engineer from India, Ms. Sawantimmigrated to the United States and was inspired enough by the economic inequality she saw to change careers from computer engineering to pursue a PhD. in Economics at North Carolina State University. After moving to Seattle several years later she became involved with the Occupy Movement which arose in the wake of the 2008 economic recession.

"The occupy movement opened up this more frank conversation about inequality, about who had gained and lost in the recession," said Miss Sawant in a phone interview. "Obviously the occupy movement named the 1% the enemy, who gained at the expense of the 99% and the rest of us were left with foreclosures, job losses, student debt and so on." Many of the tenets of the Occupy Movement became incorporated into Sawant's campaign platform in 2013, when she first ran for the City Council in Seattle and won against a four-term Democratic incumbent. She explains her first two years in the city council, and her re-election, have played important lessons for people on the left who want to run independent working class campaigns. "When you occupy elected office it is absolutely critical you remain unfailingly loyal to the needs of working people which means you can never be bought and every moment you have to use your position to amplify the voice of working people, the voice of people of color, and the voices of the marginalized,"

Similar to what Senator Bernie Sanders is doing now in the Democratic Presidential race, Sawant made it abundantly clear she was running for office as a voice for working people, a viable alternative to establishment politics. To demonstrate this to voters she refused campaign contributions from big businesses, depending on small donations from working people. In her re-election campaign this year she raised nearly half a million dollars, with an average campaign contribution of $50. She also only takes $40,000, the average working person's salary, of her $119,000 salary as a member of City Council, donating the rest to help social justice movements.

Sawant has won several budget victories for Seattle's working class and has managed to represent and connect with those disenfranchised voters who have had very little to look forward to in politics to improve their standard of living. "The first budget process, one of the first things we found out, right in the middle of budget season the majority of the city council and the mayor took off, using $10,000 of taxpayer funds to hob knob with the chamber of commerce and big business representatives," she said. "In response, I launched the people's budget movement. We initiated it last year to bring in the voices of grassroots Seattle to reject a business as usual budget, and demand one that actually addresses the needs of working people." Including winning a bill for instituting a $15 an hour minimum wage in the city, Sawant won funds for pre-apprenticeship positions for minority groups, ongoing funding for tenant organizations, and doubling the funding of a successful jobs program targeted towards formerly incarcerated people, particularly benefiting people of color.

The problems of low income people disproportionately affect marginalized groups, such as people of color, the LGBTQ community, and women. Ms. Sawant cites obstacles to higher education, healthcare difficulties, workplace discrimination, and homelessness as some issues in which these groups are largely over represented. To correct these social injustices, she often holds town hall meetings with activist leaders from these communities. Earlier this year at a town hall meeting with LGBTQ activists, they overwhelmingly cited the two most paramount issues facing their community in Seattle was establishing a LGBTQ center and skyrocketing rents in the city. Seattle has one of the largest homeless populations in the country. Sawant added, "on average if you look at homelessness, a large disproportion are LGBTQ community members. Seattle is the only place without a metropolitan LGBTQ center. These groups need a central location where all LGBTQ people can find a safe haven, so I put forward studying how we can build such a center in Seattle."

Sawant's successes in Seattle have implications for whether a self-avowed socialist, such as Bernie Sanders, can win in a national election. Their organizing strategies of invoking a "political revolution" have several parallels, and Sawant is a shred of evidence and hope that not only can an anti-establishment candidate win, but they can actually get things done in lieu of the strong opposition they face in doing so.