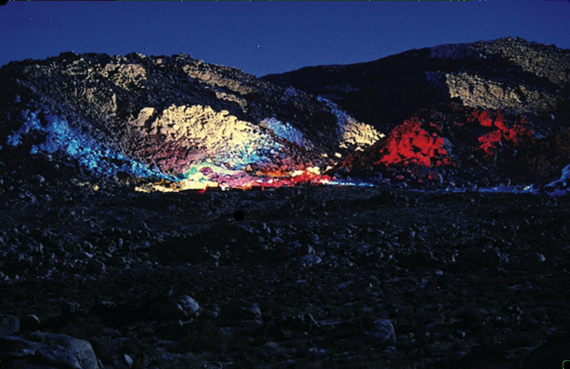 If you had been driving at night into the small California desert town of Joshua Tree in the early 90s you might have been puzzled by the swaths of colored light that illuminated the sides of the nearest boulder strewn mountain. As first green, then red, then blue shades enveloped its slopes, you could have been forgiven for thinking that some alien invasion had begun. In truth a few of the more curmudgeonly members of the local population would have agreed with you.

A view of the landscape of Shadow Ranch.

The filmmaker Matthew Patrick had purchased some strategically located properties and controlled a square mile of rugged territory backed-up against the Desert View Conservation Area adjacent to Joshua Tree National Park. Entirely undeveloped, with no connection to the town's electric or water grid, the land was as beautiful as it was intriguing, with confusing mazes of massed boulders, water-carved canyons with ancient petroglyphs, and cool shallow caverns with sandy bottoms. It was plush with desert wildlife - coyotes, quail, chuckwallas, humming birds, rattlesnakes, scorpions, and the occasional desert tortoise. 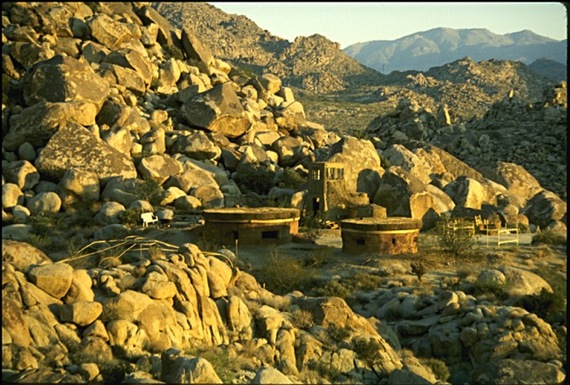 Shadow Ranch in the 1990s. Photo by Matthew Patrick.

Patrick's Joshua Tree fantasy involved filming an apocalyptic sci-fi series on site. To that end he began to build structures and acquire props that would suit the tenor of the project. Being careful not to damage the land, he gathered inspiration from sources as diverse as 60s pop culture, North African tribal artifacts, NASA, and alternative hippie architecture. Earthen yurts, wooden towers, and straw bale palisades rose mysteriously out of the valleys and along the ridge lines of his property, all of it camouflaged so perfectly that it was unseen from the highway that ran to the National Park. Walking through the boulders one constantly encountered odd and wonderous bits of some futuristic scenario that Patrick was constructing from the visions in his mind. 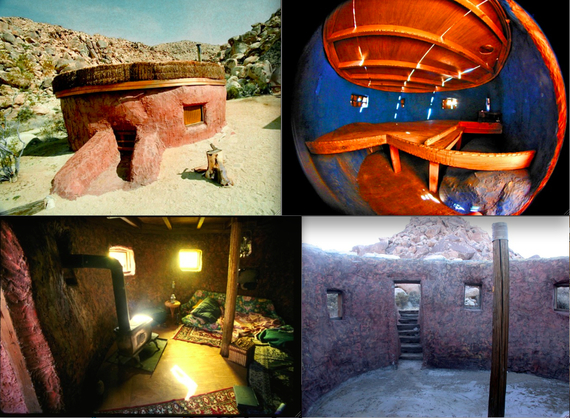 Yurt architecture at Shadow Ranch in the 1990s. Photos by Matthew Patrick.

Such projects are not realized by one man, so Patrick invited collaborators to come stay at Shadow Ranch. He hired Joseph, a bearded grizzled old Vietnam vet of few words, to be the caretaker who oversaw the activities of all the visitors. Fifty metal framed military beds were purchased and spread out next to boulders and cliffs, in yurts or caves. Artists and artisans moved in and helped construct the architectural innovations and experiment with contraptions that looked as if they could catch the winds of space-time. 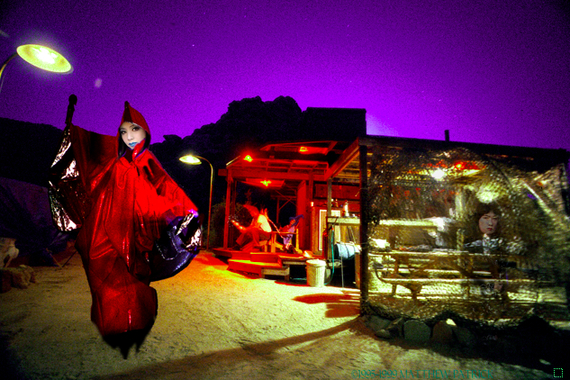 Architecture both realized and imagined from Shadow Ranch. Photos by Matthew Patrick.

Actors arrived weekly to read the ever-developing scripts, and to act out potential scenes for the proposed series. Costumes were sewn from cacophonous mixes of fur, spandex, charred plastic armor and plumed feathers. Models wore these, posed in extravagant make-up perched upon massive boulders as the sun set to give a red apocalyptic glow to each scenario. Whole families got involved, as Shadow Ranch fueled the imaginations of young and old alike. For kids it was paradise on earth. 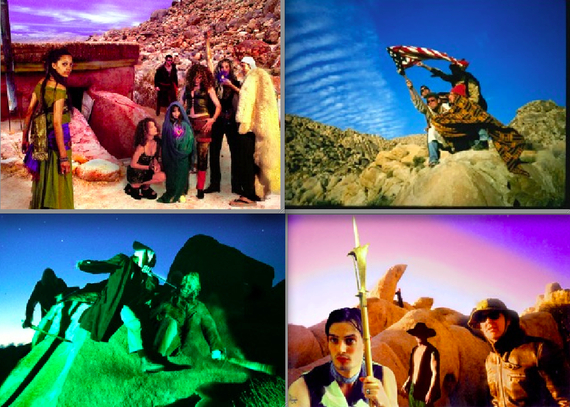 The Joshua Tree area is known for its musicians, and as they began to congregate on his property Patrick built them a stage and brought in a huge antique gas powered generator to power their instruments. Bands performed at night, enthusiastic crowds gathered to listen and dance, and Patrick began to light the whole with his colored lights. The participants found it magical and inspiring, but the outsiders and light attracted the attention of some in the town who were considerably less interested in the creative life. 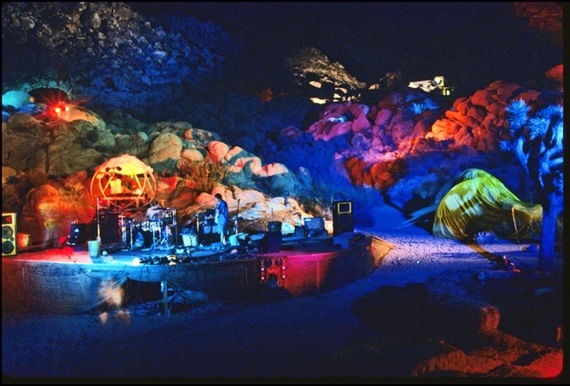 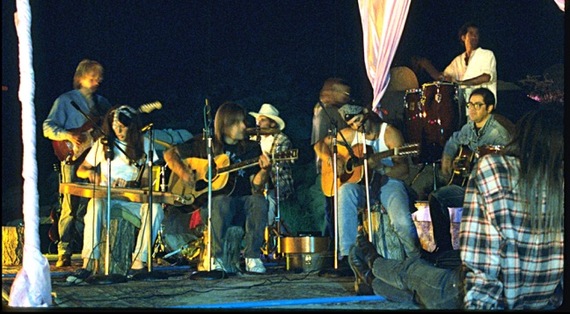 In the county election of 1998 one of the candidates ran against the corrupting influence of 'Hollywood,' and meant by that Matthew Patrick. Unfounded rumors of drug sales, thefts, underage women, and criminal types at Shadow Ranch spurred the anti-Patrick faction to victory. Not long afterwards Patrick was visited by the local Sheriff and the Head of Building and Safety of San Bernardino County who targeted the creative heart of Shadow Ranch. After some protracted legal battles, down came the yurts, the straw bale fortress, the solar power systems, the towers, and the stage. Large congregations of people were thereafter forbidden, and Patrick's dream of a utopian village set in the midst of an end-of-the-world movie series met its apocalyptic end. 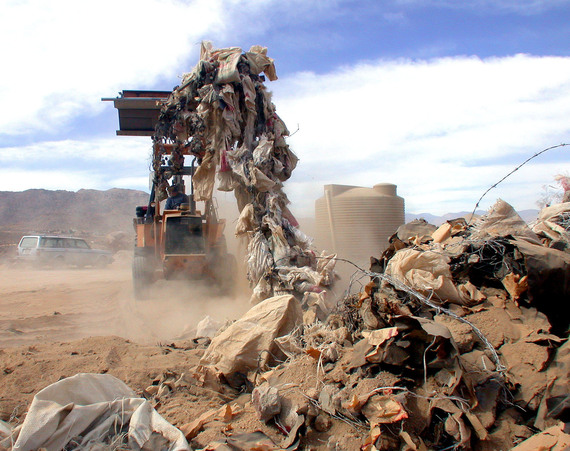 The destruction of yurts at Shadow Ranch as ordered by the county. Photos by Matthew Patrick.

What remains of the man-made past at Shadow Ranch are those elements the county deemed legal: shipping containers, metal beds, shade stands, and a pre-fab house hauled in by truck. Patrick rents out the house, bringing in tankers of water and collecting solar energy, and the property is a cash cow due to Joshua Tree's growing popularity. What remains also is memory. For the hundreds of people who participated in the creative endeavor of Shadow Ranch the experience is imprinted upon their brains like the psychedelic future history of an ancient desert tribe.

For Matthew Patrick the memories of Shadow Ranch are bittersweet. So much energy and time spent in a dream where you suddenly wake up to find small-minded reality has once again cheated you out of your glorious climax. For a decade Patrick could barely stand to visit the property, and let vandals and the elements reclaim it. But the land retains its sublime beauty and serene desert character and it has drawn him back to explore and protect it. Patrick says, "Whenever I return, it hurts. Like the stories I was writing, I had a dream of a utopia that grew from a damaged earth. I suppose utopias are only meant to be on earth for a brief period of time. The county tore down the structures, drove away the people, and destroyed my art, but they couldn't take away the land, which was always the source of my creative inspiration. When I visit the remains of Shadow Ranch, my desire returns to write new stories, shoot more film, invent unseen technologies, and build beautiful structures to share with family and friends." 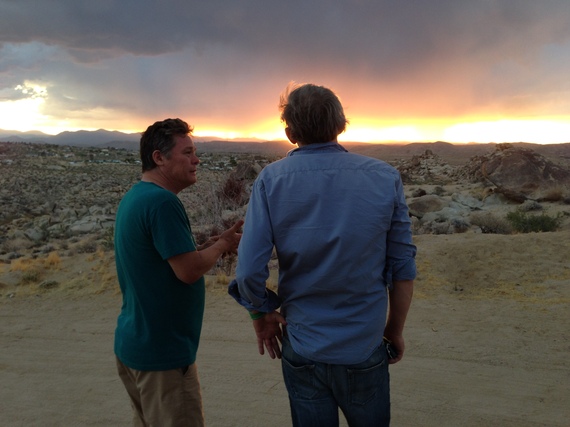