The installation, inaugurated last year, invites people to share their hopes and dreams in a public space. It consists of a wall covered in chalkboard paint and a stencil offering the prompt "Before I die I want to ______." They may complete the phrase using provided pieces of colored chalk.

The first of six Chicago walls was installed Saturday at 1101 W. Granville Ave. in Chicago's Edgewater neighborhood. The next wall is slated to be installed in the city's Pilsen neighborhood on Saturday, with an additional wall also planned for locations in Wicker Park and Chinatown. The locations of the final two walls have yet to be determined.

The Edgewater wall was packed with contributions by Monday. The contributions include wishes ranging from the specific -- "watch my kids go to college," "learn how to speak German" and "meet Rihanna" -- to the lofty -- "make my mark," "color my world" and "fall in love."

Chicagoans are also encouraged to participate by tweeting their wishes and desires with the hash tag #BeforeIDieCHI.

Good News Only and the Chicago Urban Art Society have partnered to install the Chicago walls and a spokeswoman for the groups said they have already received inquiries from several additional parts of the city, country and world alike who would like to see similar installations take place in their neighborhoods.

"Before I Die" walls have previously been installed in North American cities including Brooklyn, Montreal and San Diego, as well as international cities including London, Melbourne, Lisbon and others. The project is due to arrive in Denver and Reno, N.V., in May.

VIEW photos of Chicago's first "Before I Die" wall, all of which appear courtesy Good News Only and the Chicago Urban Art Society:

PHOTO GALLERY
Before I Die Chicago Urban Art
Download
Calling all HuffPost superfans!
Sign up for membership to become a founding member and help shape HuffPost's next chapter
Join HuffPost 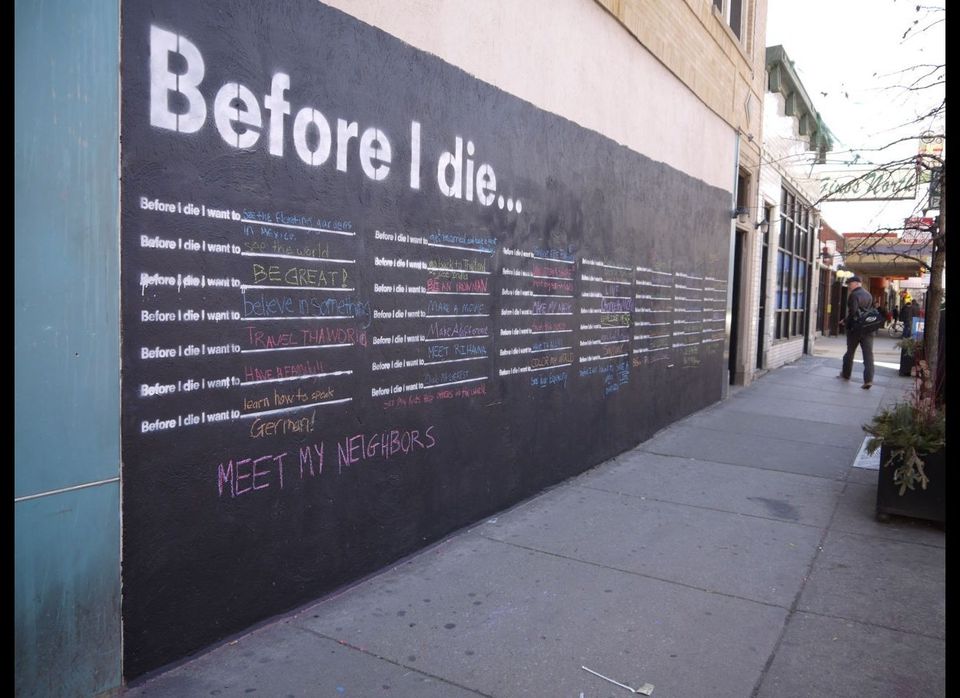 1 / 12
The first Chicago "Before I Die" installation in the city's Edgewater neighborhood, 1101 West Granville.