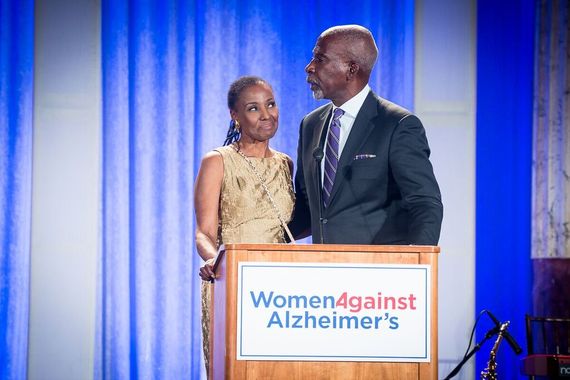 It started with lapses of memory. But who doesn't have those, right? It just means you have to concentrate a little more, be more focused and present in your life. At least that's what B. Smith thought at first.

Barbara "B." Smith - nationally recognized restauranteur, celebrity chef, model, magazine publisher and lifestyle maven - she had it all. And she deserved it. Smith was the embodiment of the American Dream. Born in rural Pennsylvania, she was one of the first African American supermodels. She wrote three highly regarded cookbooks, launched three successful restaurants, produced home products sold at Bed Bath & Beyond, and still managed to fit in a syndicated television show. And to cap it all off - she had (and has) a truly happy marriage to Dan Gasby. B. Smith's life was complete. Or so she thought until at the age of 64, one more line was added to her resume: Alzheimer's patient.

In Before I Forget: Love, Hope, Help, and Acceptance in Our Fight Against Alzheimer's, B. Smith and Dan Gasby tell their story of her devastating early onset Alzheimer's diagnosis and their ongoing fight against this incurable disease. At once a love letter to his wife and a selfless instructional primer for those embarking on the same challenging journey, Dan Gasby outlines what to expect and how to handle the rollercoaster ride of this insidious disease.

With refreshing candor, Gasby explores subjects such as preventing sexual burnout; realizing Alzheimer's defines a disease - it doesn't define your partner; dealing with the sad reality that many friends simply disappear once Alzheimer's enters the picture; understanding that this diagnosis and its progression affects every member of the family; swallowing one's pride and asking for help. Most bravely, Gasby admits and confronts his feelings of guilt when he loses it with his wife. He gives all of us permission to be real, to be human. Every day is a new normal.

But Dan Gasby and B. Smith are fighters. They are speaking out and becoming part of the solution. Through telling their story, they courageously lift the veil that shields those with Alzheimer's, and shine a critical light on the disparate effects on African Americans, who are twice as likely to get Alzheimer's than white Americans and bear over 30 percent of the costs despite being just 14 percent of the population. B. Smith and Dan Gasby are also speaking out about the importance of African Americans (and all of us) participating in clinical studies through the Brain Health Registry.

"Don't fear Alzheimer's," Gasby told a huge room of donors at a recent Alzheimer's luncheon in New York. "Hate it. And fight back - with the one weapon we have: money to develop the drug that finally beats it." Together, standing by each other's side, as they have through their whole marriage, they are bringing this most feared disease out of the shadows.

After Dan Gasby and B. Smith spoke at our annual WomenAgainstAlzheimer's Gala, Maria Shriver got up to speak. Moved by the couple, as all of us in the audience were, she said, "I will tell you one of the great things about going to events like this that I really enjoy, is that I get to see love in action like you just saw in this stage five minutes ago. To Dan and B., I am so inspired by what I saw up here ... and then I was really thrilled to hear it was your second marriage. I was like "Oh ...Ok ...Wow!"

Before I Forget informs and inspires with its powerful testimony to the power of love and true meaning of "in sickness and in health."

Intrigued? Join Dan Gasby on January 26 on Alzheimer's Talks to hear how he's coped with caregiving and about the research that gives him hope for the future.