End extreme poverty. Fight inequality and injustice. Fix climate change. That's the vision behind the 17 global goals for sustainable development that world leaders will commit to later this month at the UN. The fifth of those 17 goals, to "achieve gender equality and empower all women and girls," is absolutely essential. You cannot solve the world's problems while keeping half the population out of leadership and subordinated to the other half.

There are many paths toward gender equality for all women and girls. But before we in the U.S. presume that's only a problem in the developing world, let's take a closer look at our own backyard. I want to focus on just two things we need to do to achieve equality for women here at home: Guarantee every woman affordable access to the full range of reproductive-health-care services; and increase the minimum wage to a livable wage, indexed to inflation.

There's no doubt that these solutions work. But there's plenty of opposition from Congressional Republicans and far-right extremists who consider "fair" a four-letter word.

According to a report released this year by the Black Women's Roundtable:

The rise in America's maternal-mortality rate can be attributed almost
entirely to increases in maternal mortality among Black women. The most
recent publicly available data on the matter shows a rise in Black
maternal mortality from a rate of 36 deaths to 42.8 deaths per 100,000 live
births between 2009 and 2011. Maternal mortality for white women
remained virtually unchanged during that time period (12 to 12.5 per 100,000). 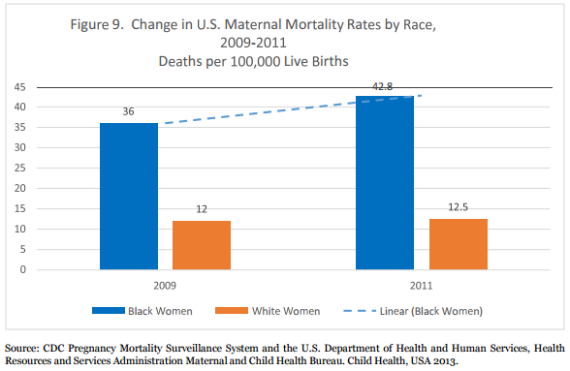 The problem is a lack of health insurance. As Washington Post columnist T.R. Reid wrote, "In all the other industrialized democracies, every woman has access to free or low-cost medical treatment." But in the U.S., low-wage jobs -- where women of color are dramatically over-represented -- don't come with health benefits. To make matters worse, 22 states have rejected Medicaid expansion, depriving more than two million women of basic reproductive-health-care coverage.

The National Women's Law Center (NWLC) issued a state-by-state Report Card on Women's Health. How did your state fare?

Even for those women who have insurance, the Affordable Care Act allows states to block abortion care from all or most health policies, and numerous states have done so. But access to abortion care, like access to contraception, means fewer maternal deaths each year. The EACH Woman Act would require abortion care to be covered by all insurance policies. Find out if your member of Congress is a co-sponsor and if not, urge them to sign on.

We know that government action can bring down the rate of maternal deaths because we see it happening everywhere around the world. Everywhere, that is, but here. We have a lot of catching up to do.

Another measure of global citizenship for the U.S. is how we fare in providing economic opportunity for women.

The fact that two-thirds of minimum-wage workers are women accounts for a significant part of the gender and gender-race wage gaps. By one estimate, raising the minimum wage to $10.10 per hour and indexing it to inflation would reduce the gender-wage gap by five percentage points -- more than the pay gap has shrunk in over a decade!

NOW has long advocated for a livable minimum wage for all workers, no matter what job category they occupy. Many people are unaware, for example, how low the minimum wage for tipped workers is. Economist Jared Bernstein wrote in the Washington Post,

In many states, tipped workers (for example, waiters and waitresses) currently have a minimum base wage of only $2.13 an hour. These workers are still supposed to make the regular minimum -- employers are required to make up the difference if adding tips to the base wage doesn't get a tipped worker all the way there -- but this requirement is difficult to enforce in practice. 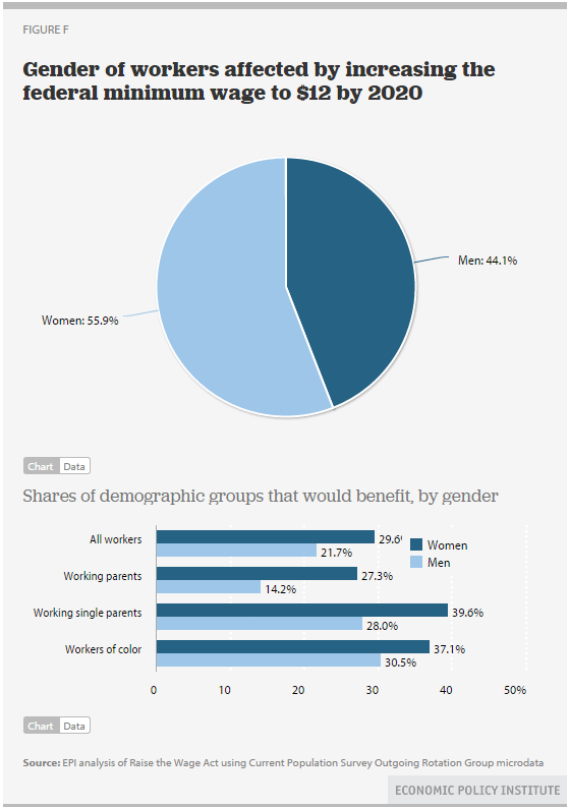 A report from the National Women's Law Center explores how raising the minimum wage would dramatically improve the lives of women. The report found that:

In the U.S., we like to think we are the leaders of all progress. But it doesn't hurt to pay attention to other countries' successes. According to the World Economic Forum's Global Gender Gap Report, Sweden consistently ranks in the top 10 for gender equality (the U.S. is 20th!). Universal health care, including birth control, abortion and pre-natal care, has been in place in Sweden for decades, and the maternal mortality rate there is less than one-third the U.S. rate. And wages? The lowest-paid workers in Sweden make about $19 per hour, while here the minimum wage has been stuck at $7.25 -- a poverty wage -- since 2009.

There is a lot we can do to achieve the global goal of meaningful, sustainable gender equality. But reducing maternal mortality and increasing the minimum wage would be a good place to start.