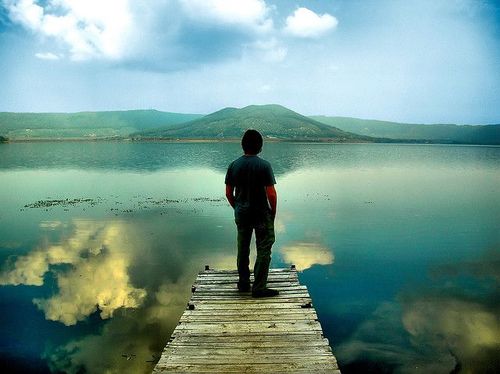 Image: Flickr Creative Commons |A Man and His Thoughts...| by Giampaolo Macorig

August -- the peak of summer, with the sun blazing and a small speck of fall on the horizon, you push to make the most of what is left of the hot days in front of you. Here in America, we do this by packing our schedules and maybe fitting in a long weekend of camping in between work meetings. And if you do take a vacation, you are not really, truly stepping away from your work, because chances are you still check your email -- just so things are not too crazy when you return.

Yet in Europe, for many, if not most, August is the month of vacances season. Stores close, companies turn on their "out-of-office" messages and people embrace the idea of a true vacation. It is a culture that was created and enforced, and is now the norm.

I can imagine that some economists' and many capitalists' heads are about to explode just at the mere thought of it, declaring that the United States is a "successful" country because we work hard and aren't over-indulged with endless vacation. This steers me back to the question of how to define success and whether wealth should trump happiness. At the end of the day, do we want a population of wealthy people or happy people? Which is more important to us?

One of my favorite pieces of writing is "The Busy Trap," an op-ed in the New York Times that was written by Tim Kreider two summers ago. It stuck with me and comes to mind every time I ask someone how he/she is doing and his/her response is, "I'm so busy!" -- or when I hear myself answer in the same way. As Kreider explains, these people are not busy, they are tired.

It's almost always people whose lamented busyness is purely self-imposed...They're busy because of their own ambition or drive or anxiety, because they're addicted to busyness and dread what they might have to face in its absence.

A friend of mine in New York worked for a very well-known consulting firm, and when I saw her for brunch one day, after not seeing her for years, she told me that she would work until 11 p.m. or midnight. She said it was a competitive culture where that had been encouraged - the longer you were there proved you were working harder than the other person, therefore making you more successful and worthy of the position. With the prospect of making almost $1 million per year, she left -- it wasn't enough to replace the fact that she was miserably unhappy and exhausted.

Margaret Roach of A Way to Garden left her lucrative and successful career as the editorial director of Martha Stewart to move to upstate New York and spend her days gardening. In my interview with her she explained:

Finding herself dead center in the "busy trap," she set out to create a new and different life for herself.

The piece of our interview that has been rolling around in my head since we talked, though, is when she spoke about the importance of solitude. For Margaret, gardening isn't just a way to spend her days or make a career, but also a way to seek moments of solitude and meditation. She said:

I definitely think that solitude is so undervalued. People have no quiet time, and I have no idea how you are supposed to figure out these kinds of questions that we are talking about if you don't shut up, and sit quietly by yourself. You can't do it while you are at 17 meetings in a row. You can't do it when you are rushing and thinking how you have to text so and so and on and on.

This connects right back to Kreider's point that perhaps we fill our days with endless tasks and things to do so we don't have to be with our own thoughts and wonderings.

This mentality is being transferred to our children, too. We schedule their days down to the last minute, and start planning endless "play-dates" for them as early as we can. So, even children don't know what it feels like to truly have August "off." As Anna Quindlen writes in "Doing Nothing is Something":

Downtime is where we become ourselves, looking into the middle distance, kicking at the curb, lying on the grass or sitting on the stoop and staring at the tedious blue of the summer sky. I don't believe you can write poetry, or compose music, or become an actor without downtime, and plenty of it, a hiatus that passes for boredom but is really the quiet moving of the wheels inside that fuel creativity.

What kind of society will we have if we don't allow moments of solitude for our children? What amount of creativity and innovation will be lost and what lasting effect will this have on our society?

When starting a business or venturing out on your own, it can be so hard to not feel like you should be working constantly. The to-do lists and tasks are never-ending and it is on you to create the structure in your day. So, how do we take moments to really be quiet with ourselves, and disengage from the noise of technology and our busy schedules? How do we remember that busy does not equal better?

While we might not have the power to turn America into Europe and declare August vacances season, we can take small steps to stop the busyness in our own lives and take real moments of solitude -- a "vacances de la solitude," if you will. How will you chose to make time for vacations of solitude in your life?