Few would disagree that religion is one of the more provocative issues of our time. In America, religious ideology influences our political views, divides the masses and shapes our national agenda. Some suggest that the divisive forces of religion are too great to overcome and conflict is an inevitable by-product of faith.

Yet from time-to-time we are reminded of the unifying capacity of the human spirit, often in places where we least expect it. One such reminder comes from my alma mater, the United States Air Force Academy. This year the Falcons recaptured the Commander-In-Chief's Trophy for the first time since 2002, and recently won the 2010 Independence Bowl. And while their journey to reclaim the trophy gives "Zoomies" everywhere reason to celebrate, their success is also emblematic of a transformation USAFA has undergone in recent years -- a journey from spiritual crisis to interfaith unity.

At the Air Force Academy (USAFA) cadets come from all backgrounds and religions in America. They carry a tremendous academic and military load during their freshman year, and are known as "Doolies" until they are recognized as upperclassmen. For most Doolies, the freshman year is a grueling ordeal. The majority of the day is spent either at class or standing at attention. Naturally, cadets bring a strong sense of spiritual belonging with them from communities all over America, and these values help sustain them through their Doolie year. 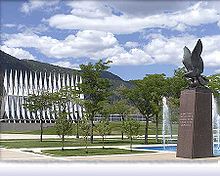 As one of the few Hindu cadets at USAFA in 1989, the Academy was very accommodating to my spiritual needs. USAFA Chaplains even dusted off a small "all faiths" room in the Cadet Chapel to ensure I had every opportunity to practice my faith. This gesture made all the difference and supported my spiritual development during my Doolie year.

In the daily freshman grind, Doolies are expected to memorize and recite reams of information to members of the upper classmen. This activity most often occurs during high-pressure sweat sessions known as "knowledge reviews," events designed to build knowledge, precision and attention to detail expected of future officers. During one particular knowledge review, we were required to recite the number of seats in the Academy's Cadet Chapel. "Cadet Hartman, how many seats are in the Cadet Chapel?" The upperclassman shouted as they directed questions at us one-by-one. Nervous and fatigued, we were expected to answer in unison to demonstrate a sense of teamwork.

Cadet Hartman stuttered once, and then yelled out, "Sir! There are 700 seats in the Protestant Chapel, 300 seats in the Catholic Chapel and 100 seats in the Jewish Chapel!" Cadet Hartman had stuttered. His hesitation resulted in a burst of yelling and screaming, which meant only one thing: We had to repeat the effort. The tiring sweat session continued late into the evening.

The next evening we were at it again. However, when questioned, I decided to modify the Chapel answer by saying, "Sir, there are 1200 seats in the Protestant Chapel, 600 seats in the Catholic Chapel, 100 seats in the Jewish Chapel, and 1 seat in the Hindu Chapel!" The room fell silent and I braced for impact.

Bewildered, the upperclassman paused, stared at me for a moment, and said, "Well, I guess that brings the total to nineteen hundred and one!" From that day on my fellow Doolies would answer the question by saying, "...and 1 seat in the Hindu Chapel!" The upper-class cadets were impressed by the conviction with which we presented this number and the way it formed a bond in our class.

Events like these dot the spiritual landscape at USAFA, and serve as a unifying force for the entire Cadet Wing. At lunch time, the entire student body sits down to eat together and each member is given a moment of silence for individual prayer prior to the meal -- a sign of respect for the diversity of the Cadet Wing. More profound examples occurred during my senior year: A Catholic member of my squadron fasted with his Muslim roommate (an exchange cadet) during Ramadan. Needless to say, the Muslim cadet returned to his country with a deep respect for American ideals.

Unfortunately, these incredible examples of unity would soon be eclipsed by divisive forces. In 2005, allegations surfaced that some cadets and staff were engaging in widespread religious proselytizing at the Academy. An Air Force panel investigated the allegations and found "a failure to fully accommodate all members' needs and a lack of awareness..." Evidence ranged from discriminatory remarks to official sponsorship of specific religious beliefs. And the Academy football team was at the center of the controversy. They came under intense scrutiny for posting locker room banners representing a single faith group.

Given my positive experiences, it was somewhat surprising to read about these events. However, if there was any institution capable of making things right, it was USAFA. In response to the investigation, the Academy actively sought to establish interfaith dialogue. They formed an interfaith council where all perspectives could be heard. Today, our Air Force Academy is back on track and quickly becoming a high-profile example of interfaith unity in our country. The Cadets have transformed their institution into an environment where expressing enthusiasm for faith is encouraged, without constricting the beliefs of another. USAFA has established a Special Program in Religious Education (SPIRE) where Cadets can dispel false perceptions and facilitate greater understanding of faith groups. The Academy has even established an area close to the Cadet Chapel where members of Earth-centered religions can practice their faith. While there is still more work to be done, the transformation has been remarkable.

And well this transformation should continue, because the skills in religious tolerance taught at the Academy are translating into success on the battlefield. Like their fellow service members, USAFA graduates are building global partnerships abroad as our country engages with foreign nations. Cultural and religious tolerance are key skills in our efforts in Iraq and Afghanistan; and nobody knows this more than military members serving there. As an Air Force officer, I've removed my shoes in a Jordanian control tower, held hands in friendship with Coalition partners in Yemen and rejoiced in a Baptist service while deployed to Baghdad. Gestures like these came naturally to me -- because of the lessons I learned at USAFA.

In 2008 I had the chance to fly into Afghanistan with a diverse C-17 crew. During a stopover in Europe, we had the chance to interact with the local citizens. One citizen remarked that he found it hard to believe that we could function as a crew with so many cultural differences. Of course, my crew reacted in unison, "That is what makes America so strong!"

Responding in unison. That sounds familiar.

Many of my fellow Americans struggle with unity and religion, and gravitate to the more divisive aspects. They often conclude that it can't work. Well, in the Air Force, we make it work. In the combat environment all religions become one, bound by the MacArthur's compelling words "Duty, Honor, Country." On the battlefield, divisive ideology takes a back seat to the unifying aspects of our religious beliefs. The spiritual versatility taught at the Air Force Academy is now a force multiplier for our military. And our Nation is better for it.

So it is with the Falcons. In fact, it is fitting that the Air Force Fighting Falcons found themselves victorious in the Independence Bowl, because their success is emblematic of a deeper, more spiritual path taken by the institution as a whole. True, we are a Nation that rose out of the generosity of Judeo-Christian values. But the Falcons have taken this generosity and chosen a path as our forefathers had intended it: with a unifying purpose, and linked to the words on our great seal, "E' Pluribus Unum," that out of many, we are one.

In America, opportunities to use religion as a divisive force abound. However, we should actively remind ourselves of the unifying capacity of the human spirit and exercise a little bit of that spirit every day. So when the divisive forces of religion rear their ugly head in your community, before you widen the conflict, before you reach for hate, always, always, remember the Falcons.

Editor's note: Ravi Chaudhary is an Air Force officer and works as a strategic planner at the Pentagon. He acknowledges that the themes presented in this essay are based on the movie 'Remember the Titans,' released by Disney, written by Gregory Allen Howard and Directed by Boaz Yakin. Some portions closely resemble dialogue from the film and the author wishes to acknowledge the screen writers for their contribution to this essay.