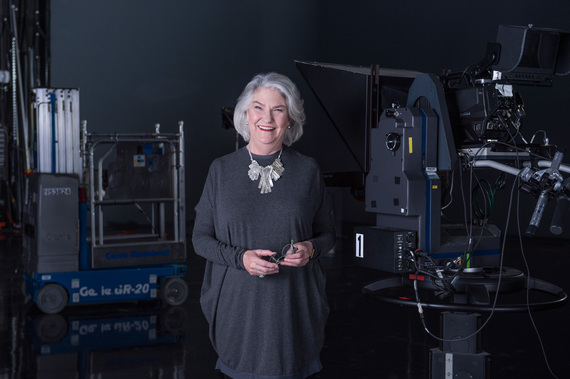 Rebecca Eaton, The Emmy Award-winning producer of PBS's Masterpiece, has brought us many beloved television series over her thirty years at Masterpiece, based here at WGBH in Brighton including the sweeping Downton Abbey series that will air its final episode this Sunday, much to the despair of its lulled audience. Eaton weighs in on the success of the series focussing on Julian Fellowes. "Julian Fellowes created the world of Downton Abbey and twenty major characters and their storylines. He was ready to tell this story. He knew the world. He loved the world and that's when you can have magic: when you have a creative person who finds their subject," says Eaton.

Eaton, who had long been the helm of the PBS series Masterpiece Theater and Mystery!, oversaw a highly successfully relaunch of Masterpiece in 2008 which attracted a new generation of viewers. She has brought American audiences Hilary Mantel's Wolf Hall, the recent hits Sherlock, Poldark and Downton Abbey -- the most-watched drama in PBS history -- as well as such high-profile titles as Mr Selfridge, Endeavour, Wallander, Prime Suspect, Cranford, Little Dorrit, Inspector Lewis, and The Complete Jane Austen. Under her leadership, Masterpiece has won 55 Primetime Emmy Awards®, 15 Peabody Awards, six Golden Globes®, and two Academy Award® nominations. In 2011, Eaton was named one of Time's 100 most influential people. Her distinguished career has earned her the official recognition of Queen Elizabeth II--with an honorary OBE (Officer, Order of the British Empire). Viking published her memoir, MAKING MASTERPIECE: 25 Years Behind the Scenes at Masterpiece Theatre and Mystery! on PBS in 2013.

What intrigues us about Eaton's fascinating career is not only her skill and success at building up a brand she calls "The Little Black Dress" of television, but her experience and appreciation for story, as well as her insight into what she explains as "the magic when an artist finds their subject."

How does your love of stories inform your Masterpiece mission?

My first experience of storytelling was having my father tell me bedtime stories. He would make them up and lie on the floor of our bedroom, telling us stories about Willie the Whale with the Detachable Tail and his girlfriend Susie. And then reading came easily to me and I would go places reading: I would time travel and fly around the world and to other countries, particularly England. I had a real love from the earliest time of all things English.

For a bookworm, and as the daughter of an actress and an English professor, I think it's the perfect job for me. I love good writing and drama, but there was always a little showbiz in the air because my mother had been on Broadway and she'd made some movies.

I had never ever intended to do this job. I was a documentary filmmaker because I loved to hear stories, I loved to get to know somebody - much as you're doing - and profile them to really figure out who they were, and then give my version of it. I had never thought about making drama or being close to anybody making drama. In fact, when this job came up, I thought I shouldn't even apply. It turned out to be perfect.

You started thirty years ago with Masterpiece. What did the job look like then?

Well, it was a lot of what it is now. The executive producer of Masterpiece is the person who chooses which British programs will be included in Masterpiece, and it means looking at a lot of shows that are already made, reading scripts, and choosing the ones that would suit this audience. It's a dream job! I talk to British producers about their hopes and dreams for upcoming shows and to those who are taking pitches, and then we fund those productions to make them possible. We don't make them here. They're made by British companies and British broadcasters - for the BBC and ITV - and once they're done, we bring them back here. It's also my job is to make sure the whole country knows about Masterpiece and knows about whatever show is being produced. There's a great deal of publicity and marketing to be done. I also have to raise money.

You're a curator of sorts.

Yes. Curator is exactly the word.

How many productions do you fund a year?

It varies. It's more the number of hours. It can be a few very long running series like Downton Abbey or Mister Selfridge or Indian Summers. And there were years when we would do ten or twelve very short mini-series like Mrs. Brown.

Mrs. Brown was just one night, but it was a very important title. Masterpiece used to be much more of a mix of mini-series, singles, and long-running titles. Now we're back in the age of long-running titles as we were with Upstairs Downstairs, The Duchess of Duke Street, and I, Claudius.

Because of the technology of choosing when you want to watch a show. You can do that now. You don't have to sit down on Sunday night at nine o' clock. Many people like to watch TV the way they read books. They like to dig in, read a whole bunch of chapters or screen a whole bunch of episodes at once. A series of ten or thirteen hours is very satisfying for the audience and it's also cheaper to make. You can amortize the costs over lots and lots of hours. From a production point of view, if you have to find a location or get everybody to a set for one hour, it's a very expensive hour. But if it's over many episodes, it's much cheaper.

What do you think contributes to this Golden Age of public television we're in?

Public television led the way. Masterpiece is forty-five years old. We've always had quality drama, and Nova is not much younger than Masterpiece. We've always been there and now, largely because of cable and Netflix and Amazon, more people are doing better, smarter television and a lot of movie writers, directors, and actors are migrating to television.

Read the full interview with Eaton on TheEditorial.com where Heidi Legg interviews visionary voices around her from Cambridge, MA.