Beggars of Life is a film whose reputation is picking up steam.

Directed by William Wellman the year after he made Wings (the first film to win an Academy Award), Beggars of Life (1928) is a gripping drama about a girl (Louise Brooks) dressed as a boy who flees the law after killing her abusive stepfather. On the run, she rides the rails through a male dominated hobo underworld in which danger is always close at hand. Picture Play magazine described the film as "Sordid, grim and unpleasant," though added "it is nevertheless interesting and is certainly a departure from the usual movie."

Beggars of Life will be screened on February 20th as part of Film Forum's Wellman Festival. It is a great opportunity to see a rarely screened film not readily available on DVD.

Beggars of Life is based on the 1925 novelistic memoir of the same name by Jim Tully, a once celebrated "hobo author" whose own reputation is also on the rise. Kent State University Press in Kent, Ohio (Tully's one-time hometown) has launched an ambitious program of reissuing the author's books, including Beggars of Life -- his best remembered work. They have also recently published an excellent biography of the author called Jim Tully: American Writer, Irish Rover, Hollywood Brawler. The book includes a forward by documentary filmmaker Ken Burns, who calls it "hugely important." Coincidentally, Tully biographers Paul J. Bauer and Mark Dawidziak are speaking about the author at New York University's Ireland House on February 23 at 7 pm. More info here.

Though shot as a silent, Beggars of Life has the distinction of being considered Paramount's first sound film: a synchronized musical score, sound effects, and a song were added at the time of its release. Early advertisements for the 1928 film even boasted "Come hear Wallace Beery sing!" The gravel-voiced character actor and future Oscar winner plays Oklahoma Red, a tough hobo with a soft heart. Richard Arlen, who the year before had starred in Wings, plays Brooks' romantic interest.

Beggars of Life is a film about the desperate and the downtrodden. And in some ways, it anticipates films made during the Depression, which was just a few years off. Among them is Wellman's own Wild Boys of the Road, from 1933. It too is included in the Wellman Festival. 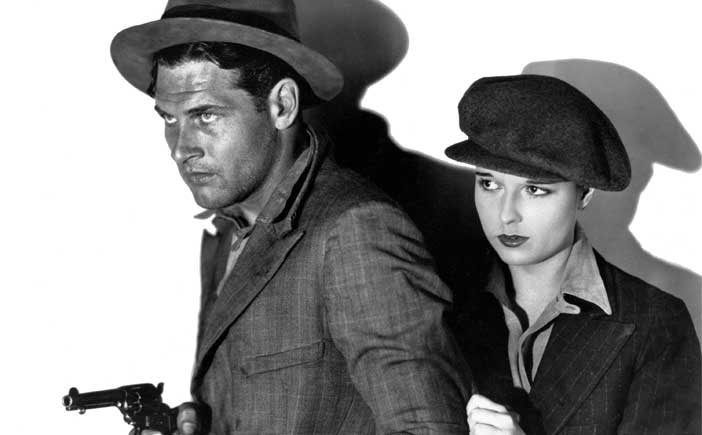 In 1928, Beggars of Life was named one of the six best films for October by the Chicago Tribune, and, it made the honor roll for best films of the year in an annual poll conducted by The Film Daily. Nevertheless, it is little known today and its grim story set among disheveled tramps drew mixed reviews upon release. One Baltimore newspaper said it would have limited appeal, quipping, "Tully tale not a flapper fetcher for the daytime trade."

Louella Parsons, writing in the Los Angeles Examiner, echoed the sentiment when she stated, "I was a little disappointed in Louise Brooks. She is so much more the modern flapper type, the Ziegfeld Follies girl, who wears clothes and is always gay and flippant. This girl is somber, worried to distraction and in no comedy mood. Miss Brooks is infinitely better when she has her lighter moments." Her cross-town colleague, Harrison Carroll, added to the drumbeat of disdain when he wrote in the Los Angeles Evening Herald, "Considered from a moral standpoint, Beggars of Life is questionable, for it throws the glamour of adventure over tramp life and is occupied with building sympathy for an escaping murderess. As entertainment, however, it has tenseness and rugged earthy humor."

Critics in New York were also divided on the merits of Beggars of Life, so many of them instead focused on Brooks' unconventional, cross-dressing role. Brooks, it should be noted, was something of a local celebrity in the 1920s. The actress had lived in New York in the mid-twenties while appearing with the George White Scandals and Ziegfeld Follies. And, more often than not related to some outrageous behavior or a scandal, she also managed to get her name or picture in the paper on more than a few occasions.

Mordaunt Hall, in the New York Times, noted, "Louise Brooks figures as Nancy. She is seen for the greater part of this subject in male attire, having decided to wear these clothes to avoid being apprehended. Miss Brooks really acts well, better than she has in most of her other pictures."

The New York Morning Telegraph penned, "Louise Brooks, in a complete departure from the pert flapper that it has been her wont to portray, here definitely places herself on the map as a fine actress. Her characterizations, drawn with the utmost simplicity, is genuinely affecting." While Quinn Martin of the New York World wrote, "Here we have Louise Brooks, that handsome brunette, playing the part of a fugitive from justice, and playing as if she meant it, and with a certain impressive authority and manner. This is the best acting this remarkable young woman has done."

Indeed, it was Brooks' best acting and her best silent film prior to her heading off to Germany to star in Pandora's Box and Diary of a Lost Girl (both 1929). It is on those two films, each directed by G.W. Pabst, that Brooks' reputation rests.

Girls dressed as boys, pastoral life gone wrong, the mingling of the races, desperation depicted among the glitz and glamour of the twenties -- there is a lot of friction and a lot going on in Beggars of Life. It's a more than worthwhile film and one well worth watching. And, until a few years ago when the George Eastman House blew-up its sole surviving 16mm print to 35mm, Beggars of Life had been little seen.

Wellman was one of the great directors -- and he made a lot of great movies; among them are Wings (1927), The Public Enemy (1931), A Star is Born (1937), Beau Geste (1939), Roxie Hart (1942), The Ox Bow Incident (1943), and Battleground (1949). Actor and author William Wellman Jr., who has recently completed a biography of his father and is introducing some of the movies at the Wellman Festival, stated via email, "Beggars of Life was one of my Father's favorite silent films. He loved it. He talked about it a great deal with appreciation and GUSTO."

Beggars of Life will be screened on February 20th as part of Film Forum's William Wellman Festival. Start time is 8:35 pm. Musical accompaniment will be provided by Steve Sterner. Film Forum is located at 209 West Houston St., west of 6th Ave.

Thomas Gladysz is an arts journalist and silent film buff. He is also the founding director of the Louise Brooks Society, an online archive and international fan club devoted to the silent film star. Gladysz has organized exhibits, contributed to books, appeared on television, and introduced the actress's films around the world.