In our March 15th blog post (What's So Bad About a Little Deflation?), we discussed deflation and why central bankers across the globe have gone to great lengths to avoid an environment of falling prices. We said that a deflationary environment is undesirable for three primary reasons: 1) lower prices send negative signs about demand (or rather lack thereof) and therefore can affect consumer and business confidence; 2) lower prices cause investment and spending decisions to be deferred; and 3) a deflationary environment makes it harder for borrowers to pay back their debts. Fortunately, we concluded that the indicators of inflation had actually accelerated in recent months, boosting the Fed's contention that the disinflationary effects of a stronger dollar and falling commodity prices would be transitory. Finally, we said that the recent acceleration in inflation is a welcome development for policymakers and investors.

Today I wanted to provide a little more color on what is driving the recent increases in inflation. While the Fed says it prefers to use the Personal Consumption Expenditure (PCE) deflator as its best gauge of inflationary pressures, we think more clarity can be gleaned by analyzing the Consumer Price Index (which the Fed also uses). In the first chart below you can clearly see how the trend in inflation is upward, on both a headline basis and if we exclude the volatile categories of food & energy. In fact, the CPI excluding food & energy is now running well above the Fed's target of 2%. 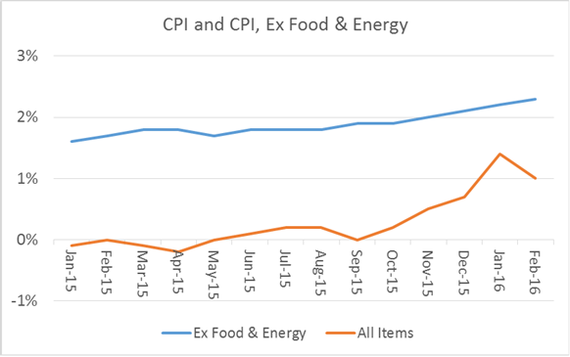 In the next chart, we show the CPI for services alone. This metric is important because services (as opposed to goods) make up a growing majority of the CPI basket. In fact, services account for 63.1% of the CPI this year compared to 62.1% in 2015. You can see that the services component is already well above the Fed target of 2%. The reading for February was +2.6%. 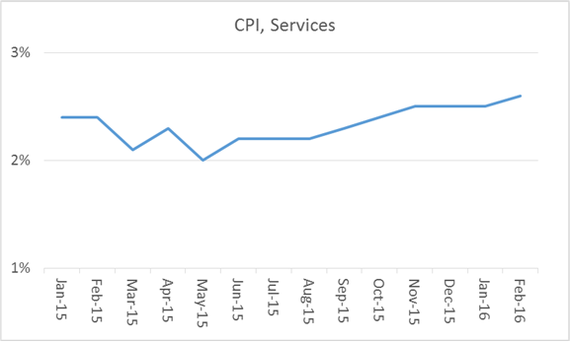 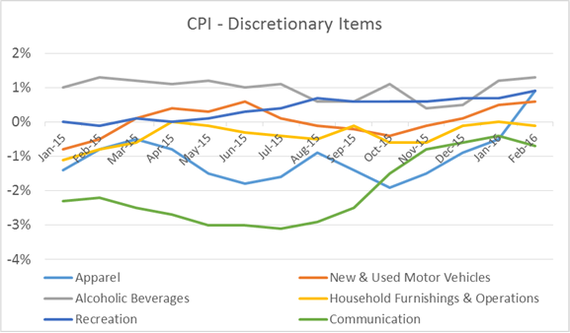 The next chart shows the source of so much Fed consternation over the past several years. The chart shows the price changes for expenditures we view as non-discretionary. These are things that consumers must spend money on, regardless of their financial situation. Prices for these categories, which collectively make up nearly 50% of the total CPI basket, are growing much faster than the Fed's inflation target of 2%. In fact, taken collectively the prices for these categories were up 3.3% in February - well above the average growth of about 3% in 2015. Why is this such a problem? Because middle class incomes have not been growing at a pace sufficient to compensate for these price increases. Consequently, the middle class is getting squeezed by the combination of stagnant incomes and rising prices for basic needs. In a nutshell, this explains the campaign success of both Donald Trump, an advocate of immigration restrictions and protectionist trade policies, and Bernie Sanders, an avowed Socialist. 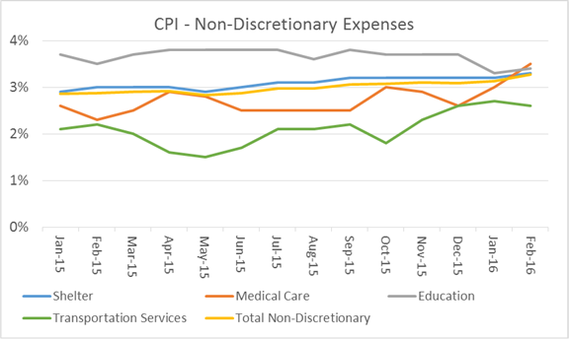 Now, let's try to get inside the minds at the Federal Reserve for a moment. While Chair Yellen has articulated some concerns about the labor market (low labor participation, weak wage growth, part-time vs. full-time, etc.), she is generally happy with the drop in the unemployment rate below 5%. Moreover, the Fed is no longer using labor-market weakness as a factor inhibiting interest-rate hikes. Regarding the inflation side of the Fed's dual mandate, we have tried to show in the charts above that inflation is indeed above Fed targets. This is especially true if we exclude food & energy (as the Fed tends to do) or look solely at non-discretionary and service categories. So, if the labor market is healthy again (at least by Fed stated targets) and inflation is rising above the 2% target, then it stands to reason that the Fed must be concerned about some factor other than its dual mandates. By all accounts, this third factor is tighter financial conditions, a catch-all term encompassing a strengthening dollar, capital flight from emerging economies, widening credit spreads, falling stock prices, and increased stock-market volatility.

However, following a swoon in markets during the first couple months of the year, most markets have displayed dramatic improvements in prices and volatility in recent weeks. Perhaps most notably, the S&P 500 has bounced a massive 12% off its low on February 11. In fact, financial conditions have been improving to such an extent that we have already heard some hawkish rhetoric out of a few Fed members since the last week's Fed meeting. The seemingly sudden change of heart prompted my friend Ken Polcari to write, "...we had two NON-VOTING Fed Presidents - San Fran's Williams and Atlanta's Lockhart - talking up an interest rates HIKE in April. REALLY? Did we not just have this conversation last week when Janet made it very clear that the conditions had changed and the FED was going to be very cautious and deliberate in any move forward?" Yesterday we heard hawkish commentary from a third Fed governor, Philadelphia Fed President Harker.

The Fed's inability, or more accurately unwillingness, to continue to normalize monetary policy does not surprise me. They have backed themselves into a corner from which it will be very difficult to escape. There is never a good time to tighten monetary policy, and this is especially true in an election year. BCA Research calls the predicament "The Fed Policy Loop":

"Since last year, each hawkish move from the Fed has been met by a sharp upward adjustment in the trade-weighted dollar and a sell-off in equities and credit spreads. Tighter-than-expected financial conditions have then forced the Fed to lower its outlook for future economic growth and adopt a more dovish policy stance. A more dovish Fed has then caused financial conditions to ease, and this easing eventually emboldens Fed policymakers to move in a more hawkish direction. The loop then repeats itself."

Unfortunately, we believe we will be living with the repercussions of the Fed's largesse for several years to come. Not only do the markets and politicians hate tightening phases, but the economic weakness across much of the rest of the world prohibits too much of a policy divergence without serious and disruptive consequences in the currency markets. The best advice we can offer equity investors during the course of this transition is to stick with quality, balance-sheet strength and strong management teams. There will come a time to get more aggressive, but the wait may be longer than most think.