At the end of a summer of wars, in the midst of a decade of wars, at the beginning of what may be another century of wars, Sinister Wisdom publishes its ninety-fourth issue on the theme of Lesbians and Exile.

Joan Nestle is a member of the board of directors of Sinister Wisdom and pitched this theme as a special issue nearly three years ago. Nestle, born in the Bronx in 1940, spent most of her life in New York City. In 1974 she cofounded the Lesbian Herstory Archives, which still thrives today in its Brooklyn home. Nestle is the author of A Restricted Country (Cleis Press, San Francisco, 2003, first published Firebrand Press, Ithaca N.Y., 1987) and A Fragile Union (Cleis Press, San Francisco, 1998) and editor of seven other books exploring the lesbian body and imagination. Since 2002, Nestle has lived in Melbourne, Australia with her lover, Dianne Otto.

Nestle's formidable editing skills matched well with co-editor Yasmin Tambiah's. Tambiah grew up in Sri Lanka and lived there before and during the war years. She has spent long periods of her adult life in the U.S. and Australia, with stints in Trinidad, India, the U.K. and Spain. Trained as a European medievalist she now researches issues at the crossing points of law, gender, ethnicity, sexuality, and militarization in postcolonial states, and also works in research management. Her creative writing has appeared, among others, in Conditions (New York), Options (Colombo), Nethra (Colombo) and ZineWest (Sydney), as well as in anthologies edited by Nestle and by Yasmine Gooneratne. She has won awards for writing from the Astraea Lesbian Foundation in New York and, most recently, from ZineWest in Sydney.

Nestle and Tambiah write in the "Notes for a Magazine:" "We decided to provoke questions about the utility and limits of the term exile by including a spectrum of other processes and states of dislocation, displacement, eviction, illegitimacy, and rejection. These states cannot be considered without simultaneously foregrounding acts of dissent, resistance, and transformations, and always from a lesbian perspective or on a lesbian continuum."

Sinister Wisdom 94 includes work by lesbians from around the globe. Activist Mariam Gagoshashvili wrote "Reportage: My Experience on May 17th 2013, IDAHO Day, in Tbilisi," a detailed, personal account of an attack by counter-protestors in Georgia (Eurasia). The issue includes letters written by out lesbians from Kosovo, poetry by Palestinian writer khulud khamis breaches the subject of citizenship and identity, and Xi'an Glynn's "There is no place for us," which considers exile occurring within the United States itself. 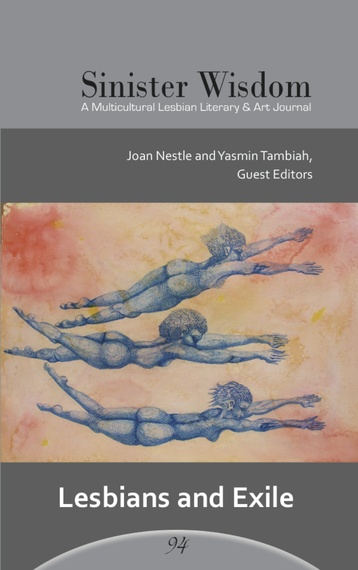 The rich material gathered in this issue of Sinister Wisdom considers the many facets of exile and its fractured, resilient, and complicated relationship to identity.