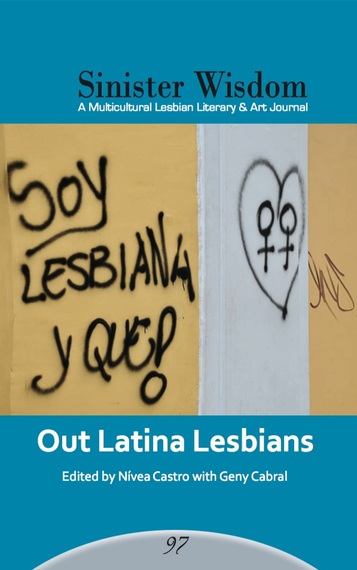 The size of this issue should not be a barrier to anyone picking it up and engaging in the vibrant conversation its pages contain. Sinister Wisdom 97: Out Latina Lesbians is a fabulous intergenerational collaboration between guest editor Nívea Castro and Geny Cabral. It features creative work of beloved and well-known Latina lesbians like Marga Gomez, Cherríe Moraga, Alina Galliano, Osa Hildalgo de la Riva, and Bessy Reyna as well as work by emerging writers including Erika Abad, Yoseli Castillo Fuertes, Deyanira García (Sargenta G), and Karen Jaime. The front cover features a photograph by Nívea Castro declaring, "Soy Lesbiania Y Que!," while the back cover features a gorgeous image by Liliana Wilson. In addition to being intergenerational, Sinister Wisdom 97: Out Latina Lesbians is bilingual. A handful of pieces are in Spanish and many of the piece blend Spanish and English with extraordinary artistry. 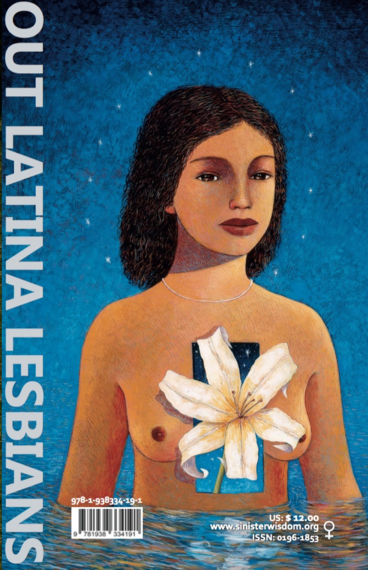 I am perhaps most proud of publishing Nívea Castro's interview with tatiana de la tierra at the end of Sinister Wisdom 97: Out Latina Lesbians. tatiana de la tierra is the author of For the Hard Ones: A Lesbian Phenomenology and one of my favorite writers and thinkers. Castro interviewed de la tierra shortly before her death in 2012. The long, intimate, wide-ranging conversation between Castro and de la tierra explores de la tierra's life, work, and activism. It is a piece not to be missed.