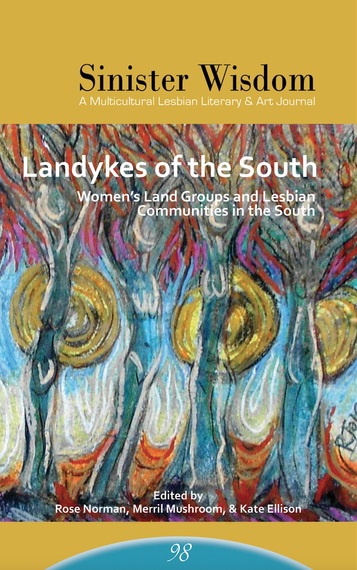 For some early women's liberationists in the first consciousness-raising groups, forming a women's land group was an outcome of the process, putting theory into action. Some Lesbians came out in the counterculture's back-to-the-land movement, some waking up to feminism after moving to the country with a mixed group or male partner. Sinister Wisdom's collection of Landyke stories begins in 1969 when Corky Culver's consciousness-raising group in Florida, possibly the first Lesbian land group in the country, began to look for land. The story ends in this issue at the end of the twentieth century in 1998 with Maat Dompim, but the Landyke movement continues in some form to this day.

In the pages of Sinister Wisdom 98: Landykes of the South, some of my favorite lesbian feminists make marquee appearances: Barbara Deming, Andrea Dworkin, Merril Mushroom, Amoja Three Rivers and others. The stories of Landykes of the South ultimately are not about outsized, charismatic individuals. They are stories about communities where individuals gather to create something greater and more meaningful than any one person.

Sinister Wisdom 98: Landykes of the South is narrated skillfully and organized to evoke southern lesbian land communities. This is an issue that simultaneously educates and delights. If you are like me, you will be riveted reading these stories about lesbian landykes and learn an extraordinary amount of new information about lesbian-feminism, land communities and the visions that womyn brought to community building. Perhaps equally important to the inspiration that these stories offer are the clear- eyed assessments of challenges and frustrations in building land communities. These are powerfully human stories that help us all understand more about lesbian-feminism and where -- and how -- we live our lives.

From this issue of Sinister Wisdom, the complexities of lesbian identities and lesbian-feminist political actions emerge. The stories in these pages capture many people's lives and modes of finding ways to live in the world with integrity, conviction, passion and pleasure. Sinister Wisdom 98: Landykes of the South also contributes to the important work of documenting the history of lesbian-feminism -- and lesbian separatism. Discussing, debating, analyzing and arguing about lesbian separatism has been an important topic for Sinister Wisdom since the journal began. I am pleased to see the conversation continuing with this issue.

I praise all of the women working on the Southern Lesbian Feminist Activist Herstory Project and Womonwrites, the southern gathering of women writers that nurtures and supports this project. Rose Norman has been my primary contact and liaison through the process of these two special issues; Rose is an extraordinarily smart, funny, hard-working, compassionate, thoughtful and committed lesbian; it is a pleasure to work with her. These great writers, activists and bon vivants preserve lesbian lives through storytelling, oral herstory interviews and archival preservation. I salute them for their work.

This issue of Sinister Wisdom is a reflection of one of the core values of Sinister Wisdom: the journal preserves lesbian herstory and culture. Yet, the landyke movement is not something that is just in the past. Recently, a student of mine graduated from college and headed west to explore contemporary land communities as she thinks about how she wants to live her life. The pull of sustainable and mindful living in political communities where people share commitments to feminism, lesbian rights, social justice and progressive values continues. Sinister Wisdom 98: Landykes of the South expresses some of the history of this vibrant node of lesbian-feminism and also contains the seeds of the future. It is such a pleasure to publish this volume and share it with the world.