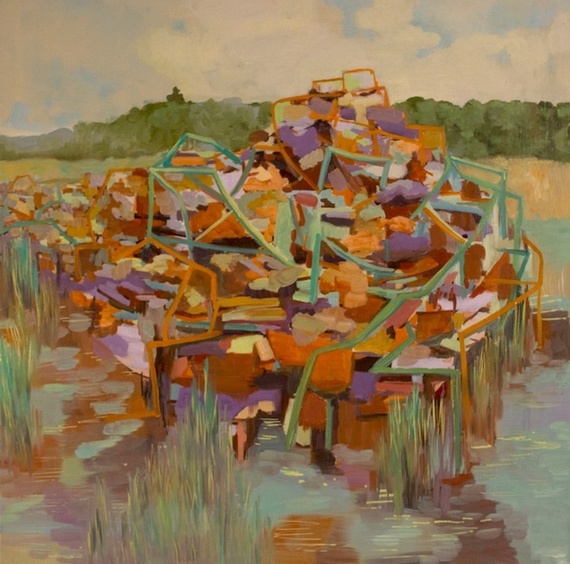 In this, the fifth of a series of interviews that focus on Local 829's Scenic Artists who sculpt and paint in a variety of ways the sets we see on television, in movies and documentaries, on theater stages, and in the backgrounds of television and internet commercials the spotlight will be on the fine art of Anna Ortiz.

I only worked briefly with Ortiz on one or two occasions a few years back but I've since had a lasting and unwavering appreciation for her art and imagery. She was one of the first artists I chose for the exhibition Shaky Ground, which opens this coming January at Lesley Heller Workspace gallery, as her art very often has a feeling of cool abandonment and eerie quietude despite the alluring colors and bold compositions. The following interview will, I hope, shed a much-deserved light on her outstanding expressions that place a very firm finger on the pulse of contemporary society. 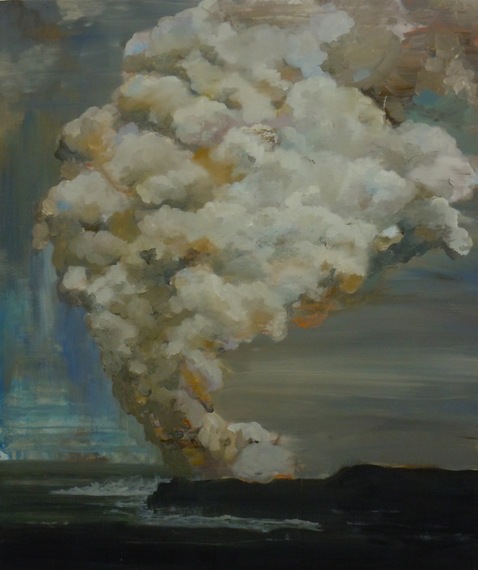 DDL: Let's begin with Coast (2013), the painting I chose to feature in Shaky Ground. In it, we see a very ominous plume of smoke rising up from the slightest hint of a calamitous and fiery event just off the coast of a rocky shoreline. In my essay, I say this "reminds us how a disaster can mark time and define an age." Was there a particular event you were referencing here or is it a more general statement about the times we live in?

AO: I painted Coast in response to the rash of wild fires in California during the summer of 2013. The Rim Fire was one of the largest in California's history and I can remember report after report of the terror it was causing local residents. The magnitude of the fire was so overwhelming, once I began working with the imagery, I became aware of the limitations of painting but also the potential for metaphor in disasters. 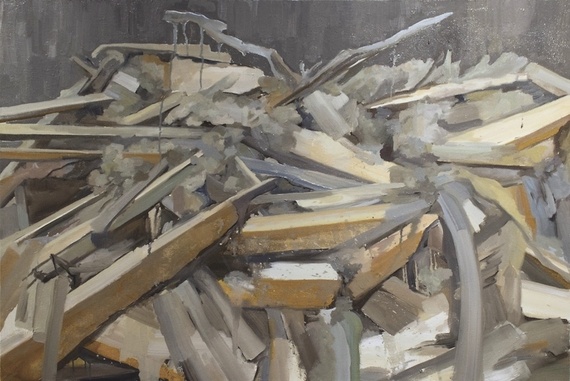 DDL: Now I'm really curious about one work in particular. Having been to Iceland a number of times I am well aware of the awesomeness of the landscape there and places like Svartifoss in particular. In your painting titled Svartifoss (2012) you depict the collapse of the noticeably geometric lava columns that riddle the base of the site, adding in some other types of silvery twisted and toppled debris and not the falling water. To me, this has some enviro-political overtones if I'm not reading too far into the narrative. It reminds me of the big battle a few years back to redirect some of Iceland's natural forces to power a large aluminum plant, and how many Icelanders were worried about the degradation of the beauty of the land and the misuse of natural resources.

AO: After spending a month in Iceland at an artist's residency I toured the southern coast, which is when I came to visit the incredible waterfall named Svartifoss. I made the painting later in my studio in Brooklyn mostly from a compilation of imagery as well as my recollection of the basalt columns that compose Svartifoss. I was impressed by the uncanny geometry of the rock face; how it emits a strong sense of order and design as if it were man made. Svartifoss is also naturally coming undone as the columns are falling off from below creating a kind of unraveling cliff. Because of the ongoing breakage, the facade is in constant flux.

During my stay, I came to appreciate the enormous effect the economic collapse of 2008 had on all Icelanders. The identity of the country was redefined by the collapse as well as the recovery. At the same time the Great Recession and the housing crisis affected thousands of Americans. For Americans however, few significant policy shifts were made to prevent a similar future catastrophe. Imagining Svartifoss collapsing in on itself seemed like such an appropriate metaphor for the larger economic issues both Iceland and the US had faced but dealt with so disparately.

DDL: One of the things I noticed about your more recent work is your use of, for lack of a better word, a skeletal structure or framework in paintings like Caracol (2015). It's as if something was there, complete and functional and now it's gone. This element reminds me of the work of Kay Sage. Is she an influence of yours? 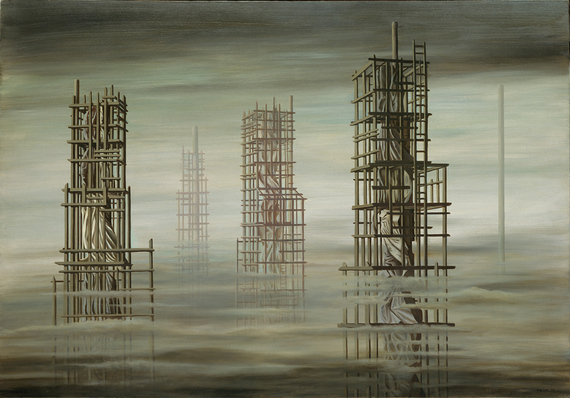 AO: Funny you bring up Kay Sage. I just came to know her work since the Met recently put one of her works on display. As soon as I saw Tomorrow is Never (1955) I felt I had a new comrade to research. As a surrealist, Sage's work resides in the subconscious world whereas mine fluctuates between history and psychology. Sage was using scaffolding to indicate solitude and entrapment. I began using scaffolding fairly recently as a symbol for transition and rebuilding. My landscapes are of post-apocalyptic moments that punctuate and rearrange history. The architectural exoskeleton is my way of holding up and tying together the constant stream of current events, which I find otherwise overwhelming. 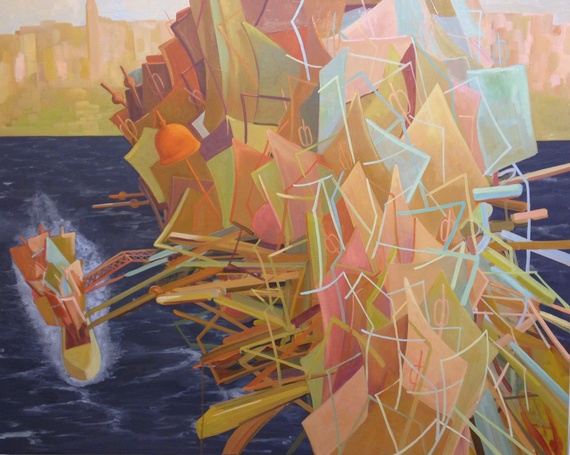 DDL: Who are some of the other artists that influence you and has working as a scenic artist changed your creative process in any way, either technically or visually? 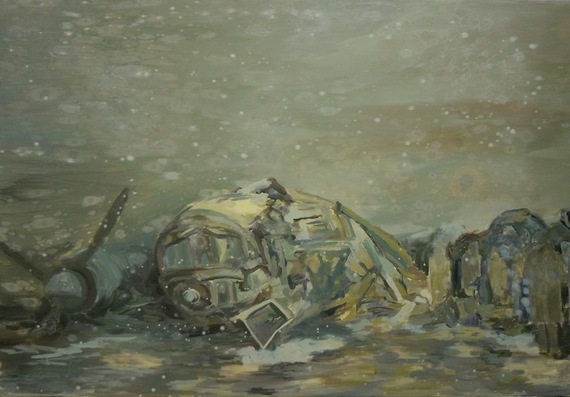 I look at work from all eras depending on my mood or the direction of the painting. I look to artists like Courbet, or Polke for political influence. Other times I need help with composition so I'll look into Rubens or Cecily Brown. Other artists like Angela Dufresne and Gerry Bergstein guide my interest in narrative and humor. I feel so lucky to be painting at a time when all of history is fair game.

Scenic painting has taught me so much about materials, speed and scale. Since I've been a Scenic painter, I've become a much faster, more decisive painter in my studio. Once you tackle a giant set, paintings seem so much more manageable. 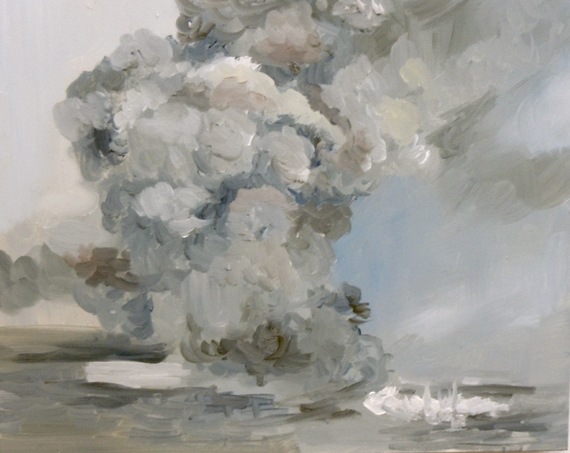 DDL: My last thought is about your basic technique or approach to applying paint. There seems to be an overall organic nature to the work - it's as if you are thinking out loud, changing color, composition, shapes, movement, dynamics... Are you actively responding and reacting to a variety of impulses, both conscious and unconscious, or are you pretty much mapped out with sketches and studies and there is, in fact, little change from the original thought or intended image?

AO: My process is very organic. I never know what the painting will look like until it's finished. I generally start with printed references of history paintings and current events. I'll make a drawing and maybe a couple small preparatory paintings, fusing the different images. When I start the painting, I'll tell myself what the color should be, but it rarely ends up there. If I feel lost in the space of the painting I'll build a little 3D model out of foam core board. Sometimes I light the model and work from that, the drawings, my references and my head. After a certain momentum has built, I scrap all the aids and just work on the painting itself. The more I work like this, the more my imagination seems to be growing but I like having an arsenal of inspiration for each work.