Several weeks ago, Miss Universe pageant officials, naively or not, asked me if I wanted to come down for a few days for a Miss Congeniality-esque experience while the 88 women who had qualified from their respective countries got ready for the big night.

Of course I did.

Now, I am not exactly a pageant-type girl. I am small, I am prone to muffin top, and I shun high heels. But, in the search for new experiences, why not? 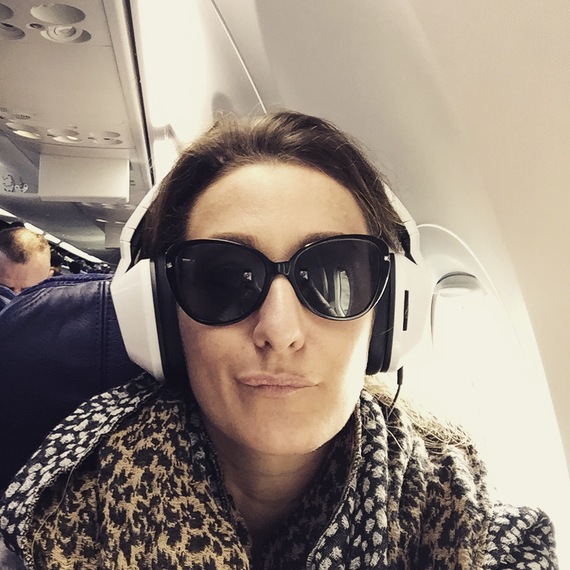 So I packed a bag and flew down with the A Broad Abroad crew to Doral, Florida, and primed myself for the Miss Universe Experience.

I showed up at the ballroom of the Trump Doral ready to represent the Galaxy of Ohio, quadrant Cincinnati, with a red T-shirt that read, "Nobody Puts Cincy in the Corner." The ballroom had been turned into a glam room, complete with rows of hair and makeup stands, racks of bedazzled dresses that would have made RuPaul's eyes bleed with envy, and more Chinese Laundry shoes than a Payless in Topeka.

While I had been warned by the Miss Universe PR person, Jackie, that she would "shut it down," if I asked Miss Lebanon or Miss Egypt about Miss Israel -- or tried to get Miss Russia to discuss shirtless Putin pics with Miss. Ukraine -- apparently Miss Israel didn't get the memo. She caused an international scuttlebutt a week later when she took a picture of herself and Miss Lebanon and put it out on her Instagram. Miss Lebanon later claimed, in an unfortunate choice of words, that she was photo-bombed. And I did get some other questions in...

WATCH THIS to find out how Miss Russia would bring peace to Syria, What Miss Korea thinks of Miss Universe not representing any other planet but Earth and How Miss Croatia feels about being ogled by old dudes in suits while in a bikini:

Everywhere you looked there were very tall, thin, and exceedingly pretty girls getting primped, fluffed, photographed, and outfitted. The girls don't go by their names. Instead, they are called by their country. "Slovakia, come here!" "New Zealand, time for pictures!' "U.S.A., looking great!" "Has anyone seen Ghana or Croatia?" "I need Philippines, stat!" 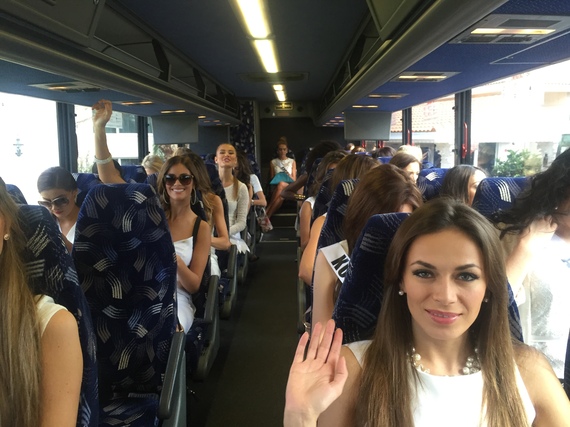 (on the bus with Miss Universe)

"This is like the Hannah Montana glam shop they had in the mall in Columbus, Ohio, for a few years," I said to Jackie, the PR woman for Miss Universe. "But for, like, adults?"

"Exactly," Jackie said, introducing me to Linda, who ran the room.

Linda, who looks like a hot younger version of Hulk Hogan's ex-wife, also named Linda, was in charge of all production.

"We got some Chic-fil-A if you're hungry," Linda said.

"These girls eat fried chicken?" I asked. "You kidding me? They don't look like they eat."

"It's for the workers!" Linda laughed. "I treat my people right!"

I was assured there was food for the girls (although I just saw a table with beverages), who all looked like they were a size 0 to a minus 10 -- with the exceptions of Miss Great Britain and Miss Nigeria, who, upon introducing herself to the crowd at a welcoming event, would say, "Thank you, Doral! I love your food!"

Both were on the skinny side of normal, but compared to someone like a Miss Singapore, who looked emaciated, they were plump.

David, the dress man in charge of dressing the girls, told my producer, "We have dresses for all sizes! Well, there was Miss Great Britain ..."

Later, while talking with Nick, a comedian/host whose job was to "interview" and introduce the girls, Jackie, Linda, and Nick all professed that the Miss Universe pageant loves all sizes!

"So is there a plus-size girl this year?" I asked.

"Not this year," Jackie said.

"Not yet! But the Miss Universe organization loves all body types!"

After the same line was given to me by Nick, almost verbatim, I said,

"But I'm only seeing one body type," holding up my little finger.

He laughed and changed the subject.

WATCH: The make over in action.. and I fall flat on my face. Not kidding