The Clash Between George Pell and Reinhard Marx

As the faithful wait for the Holy Doors to open up for the Feast of the Immaculate Conception, the prison gates have opened for Francesca Chaouqui; from effigies of a new beginning to a sign that, once again, nothing's new under the sun.

Even though she was immediately released since she collaborated and is not in any case criminally responsible -- profiles that a journalist isn't fit to judge -- the young lobbyist rises up today, not only in the media but also in history, symbolically, as the image of a watershed moment and a changing of the guard. Not to mention a spring betrayed. From the Vatileaks of dilettante cardinals to those of professional consultants; prelude to a battle of the titans that has jeopardized and shaken a bi-millennial building to its core. There's a lot more going on here then synod skirmishes over the family.

For the benefit of those to come, a Spanish monsignor from Rioja and a PR expert from the Magna Graecia have put faces on the first true scandal of Pope Francis's era, centered on his people, selected by him, with a cast selected in an improvident manner and who took the stage following his election. Above and beyond individual responsibilities, all of which will be ascertained by the proper authorities, the two most high-profile people in COSEA (Commission for Reference on the Organization of the Economic-Administrative Structure of the Holy See), the commission Pope Francis set up in order to impose his authority over the Vatican's financial agencies, have been suddenly transformed into an emblem of an entirely out-of-control Babel.

The collective memory flashes back to July 2013, when Francesca Chaouqui suddenly became all the rage in the modern media, more celebrated and lauded than a Nobel Prize-winning economist: halfway between a young, Mediterranean, tanned Joan of Arc -- the avenging angel of the Curia's misdeeds, and a Saint Chiara in a Wall Street dress suit, impassioned crusader for transparency and the Pope's advisor for all things financial.

A surreal role worthy of the best Brecht play, above and beyond the chiaroscuro effects, between hermetic backdrops and comedic turns, but which must not be underestimated by mistaking supporting roles for protagonists. Vatileaks was an Italian Job, complete with the dialect-inflected accents of assemblies from Piedmont, Lombardy, Veneto and other Italian regions sucked into a fratricidal game of Risk. But the clash currently underway for hegemony over the Holy See's economic patrimony is an affair broken down into German and British, the languages of the agencies born of COSEA's institutional overhaul: the Secretary and the Economic Advisor. These two structures are sustained by two giants in clout and size from both a physical and political point of view: Australian Cardinal George Pell, and his Teutonic counterpart Reinhard Marx. 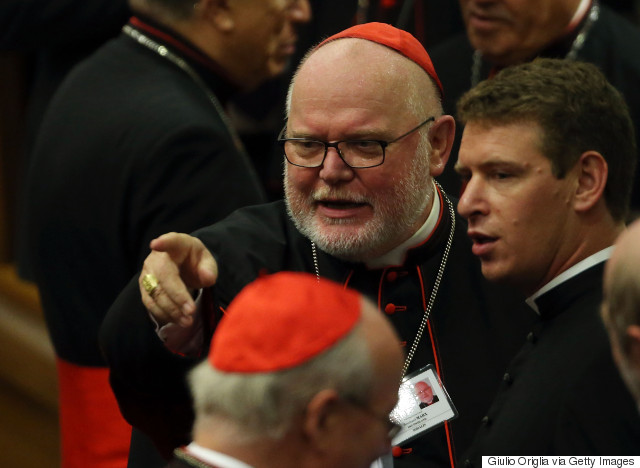 Cardinal Reinhard Marx attends the opening session of the Synod on October 5, 2015 in Vatican City, Vatican.

In layman's terms, we're talking about a Minister of the Treasury, tending to favor active management, and a Budget Committee, charged with planning: together they should plan, program and govern, on the condition that they express a unified majority, something that in this case has been lacking entirely.

The sons of a union leader and a prizefighter, the two "heavyweights" Marx and Pell went at one another publicly in the synod, albeit from a certain distance, through declarations made to journalists à la Apollo Creed and Rocky Balboa, postponing their personal showdown to the ring of the C9, the elite council that assists the Pope and guarantor agency for the 2013 alliance.

Two different schools of thought encircle the one and the other, as the New Yorker efficiently synthesized. On one side, the technocrats led by Pell, who remain faithful to the market and select the most well-paying investments in order to rationalize the system and maximize profits, which are then devolved to charitable work. On the other, the reformers, or revolutionaries if you prefer, inspired by Marx: they're not satisfied by the ends, even when noble, and most importantly don't justify the means, theorizing instead a third path, at once Third World and anti-capitalistic, that strikes no small amount of fear into the hearts of those in power and numerous intelligence agencies.

Within this scenario the Italian party has shown up divided, as usual, as it focusses on sniffing the wind and preparing itself to swoop in and save the victor. From the rapier thrusts of strategic disputes to stiletto stabs of court tactics, always hard to eradicate and as evergreen as the gardens laying in the shadow of the cupola, where rapacious falcons, werewolf crows and pirate seagulls have long since put haggard doves to flight. Now the doves have disappeared altogether.

Thus, overshadowing the Bull of Convocation that announces the Jubilee of the Poor, two major books are set to debut in stores, each stigmatizing the poor governance of this caste and setting up a blockbuster showdown. But we can't let that mislead us, tricking us into misunderstanding the global, geopolitical girth of this conflict, so very different from that of three years ago. ​ Meanwhile, the Pope's diary and daily agenda are looking more and more like a gymkhana. A minefield and a countdown, rife with maturing scandals in an era of scandals, in which Pope Francis will have to fight and suffer every step of the way, from here to the Feast of the Immaculate Conception, in order to prevent the ascension from turning into a descent, in the goals and gazes of believers, amid heavenly glimpses and infernal disappointments.

This post originally appeared on HuffPost Italy. It has been translated into English and edited for clarity.