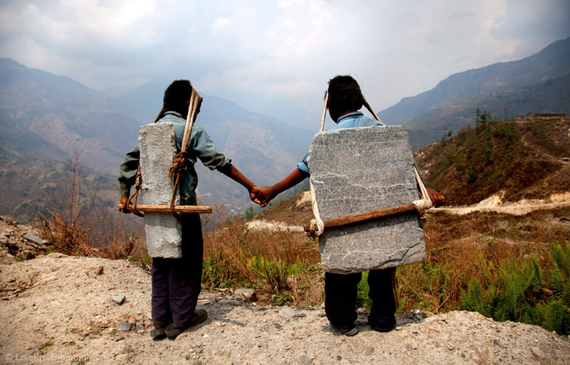 The photo that inspired a little girl to free child slaves. Photo by Lisa Kristine.

"Everyone deserves not just to survive but to live. This is the most important legacy of Solomon Northup. I dedicate this award to all of the people who have endured slavery and the 21 million people who still suffer slavery today."

An excerpt from from McQueen's acceptance speech at the 2014 Academy Awards, for 12 Years a Slave.

Amidst the Leonardo memes, celebrity selfies, and best dressed Oscar stories... there's been some celebration of Lupita Nyong's post-Oscars interviews regarding race and beauty, others on sexism in the film industry, and a series of righteous rants -- but the most important monologue of the 2014 Academy Awards was lost.

Not to belittle the grandeur production of Steve McQueen and Brad Pitt, but there's another team out there sharing a documentary on present day slavery -- and on the nine-year-old suburban girl doing something about it.

You won't see them at the Oscars in 2015; Stillmotion decided that they had to release the film immediately.

"Now that the movie is created, [people suggested] that what we really should do, is participate in A-Tier level film festivals -- Sundance, Cannes -- but sit on the film for nine to fifteen months because they demand a world exclusive? We weren't willingly to let this message sit." - Patrick Emmy-winning director, Stillmotion told TRAVELBREAK.


Every day counts. Every share counts. Awareness, is a central component to eradicating slavery.

Behind the Scenes: A Lens on Modern-Day Slavery

As I interviewed Patrick Moreau and Grant Peele of Stillmotion, I intuitively asked:
How do you meet a slave, and walk away? How do you get past physically leaving someone in an enslaved state?

'P' and Grant discussed their mixed emotions of frustration and anger.

"We were confronting, and having conversations with the slave masters, slave owners -- those are words that don't drip off our tongue in 2014, but it's the reality of catching them in the moment. We knew we were leaving these children enslaved and beholden to whatever the slave master dictated. We were so completely ill-equipped [emotionally]...but as story tellers, we can offer such enlightenment. We had to compartmentalize, rationalize our larger cause, which could create much more impact. To free the slaves, you have to be able to pull yourself together."

Here they are, two, grown, white American men, from a developed country, in the middle of a Hindu village with some cameras and a translator, subject to the norms and culture of a third world country. Limited agency -- what a horrible feeling. The irony of how unproportional that is to the limited agency of those affected by slavery.

Encounters with Survivors of Slavery 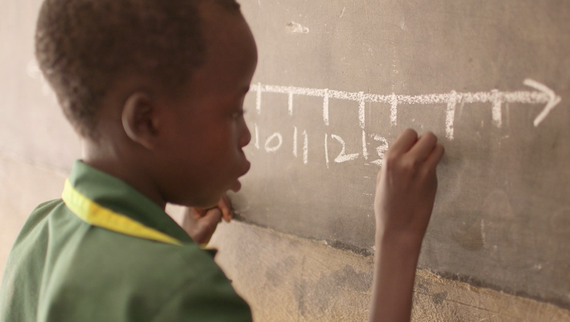 Picture a film crew in Ghana, and the sensitive nature of the interview with children who have experienced more trauma than security in their lives. Film-makers with little background or understanding of the culture they were immersed. The team dove into the circumstance as best as they could.

"Our first days there, we started making a connection with Ebeneezer. He had an escort, and he would hide. He was very shy, so we kept on engaging. We were purposefully trying to show him that we cared about him, and that it was safe around us. Later, we were prepared to have an interview with him, but we needed clean audio. The village had tremendous sound: goats, chickens, music... for clean audio, we would have to walk twenty minutes outside of the village. We were five minutes walking out, and Ebeneezer takes hold of Ray's hand. Ray is walking alongside Ebeneezer and the two of them were walking hand in hand. Ebeneezer, had been a fishing slave at Lake Volta which caused tremendous post-traumatic stress. Yet, he was reaching out to talk." 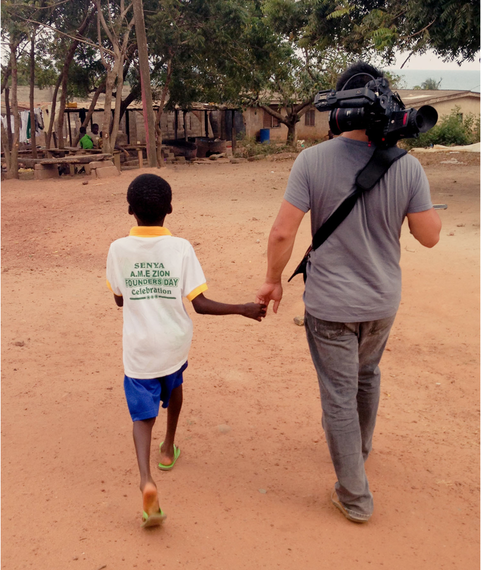 A pure and precious action -- the holding of hands -- was reflective of Still Motion's hopes to connect genuinely with survivors. The "project," the documentary, became so personal because they were there, they saw it first hand.

Grant and Patrick told me several stories about how they played soccer with kids they couldn't communicate with. About a woman who was a sex slave for eight years, yet managed to escape and offer optimism through education and action.

"It's so important that we have had such a strong experience with everyone involved with our filming, that it takes you [the viewer] to a deeper place. That as you learn about the issue, it is so easy to see the role that objectification takes. That it is so easy to treat these people as objects. That to me, it offers so much insight, into how we need to approach this film -- in subjectifying -- really humanizing, and giving these people a voice that's worth fighting for. We can't do that with a picture. We can't just having somebody talk about them. We can do that by meeting them, and hearing their story first hand." - Grant, Stillmotion.

See more in their behind the scenes video.

Stillmotion traveled in Africa, Asia, and the Caribbean to interview slaves and survivors, so that we can see that slavery is not a 'concept' - slavery is not a great story line about the 18th century for an award-winning film -- slavery is the lifestyle of torture which real people are forced to live, right now.

And just maybe, if you met these individuals and heard their stories, you'd actually give a damn.

#StandWithMe offers a four part perspective to the uplifting movement of the parties taking a stand against slavery.

1. Vivienne Harr, nine, with curly blonde hair, and bright-blue eyes beaming past her framed glasses, saw a photograph by Lisa Kristine, of two young boys enslaved in Nepal. With a pellucid heart, she made the commitment to free 500 child slaves... by selling lemonade...? Impressed by her tenacity, Vivienne's parents helped her raise $100,000. Her kindness sparked a movement.

"She's the spoon full of sugar that makes the medicine go down" - Grant told TRAVELBREAK.

2. Stillmotion interviews current and recovered slaves with the knowledgable assistance and commentary by Maurice Middleberg, of Free The Slaves.

3. 2013 Humanitarian Photographer of the Year, Lisa Kristine, and her role reflecting the lack of awareness we face as a society in recognizing that child slavery exists today -- even when physically amongst it.

4. Paul Rice, founder of Fair Trade USA, with insight on farmers moving forward; because our chocolate, coffee, and consumables shouldn't come at the price of someone's freedom. Awareness is a central component to abolishing slavery. 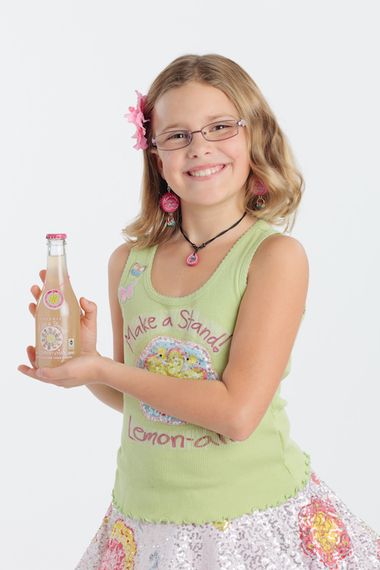 1. Support Vivienne with #StandWithMe Lemon-Aid, a social purpose company.
2. Share her story, and the story of slaves around the world.
2. Make it a social conversation: upload pictures onto Facebook, Instagram, and Twitter with a sign #StandWithMe and your own note on slavery.
4. Stay informed. Has someone died for the pleasure of your chocolate bar?
5. Check out the film #StandWithMe. Stillmotion is traveling the States, and coming to a city near you.

I had the privilege of catching a press viewing of #StandWithMe, and I cried. #StandWithme is an uplifting, motivational documentry framing the vibrant aspirations of nine-year old Vivienne, as a beam of hope within the monochromatic world of sex slavery, child slavery, and poverty. The arsenal connecting art and business to social consciousness, and the blatant responsibility we have towards humanity.

Thank you to Emily Thomas, for connecting me to Stillmotion. And thank you to Patrick, Grant, and Vivienne, for the time, energy, and funds they've invested into communicating a message for advocacy. A reminder for us -- for me -- that we can use art, business, and agency to save lives.

Show Vivienne your support. Show the 21 million people living a life we will never live your compassion. 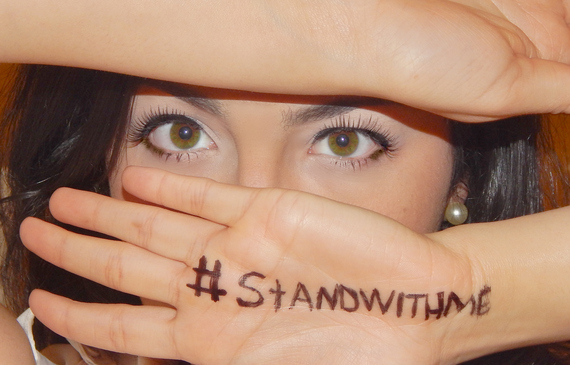