BEIJING (Reuters) -- China warned residents across a large part of its north on Friday to prepare for a wave of choking smog arriving over the weekend, the worst of which is expected over Beijing, prompting the capital to issue its second ever "red alert".

The National Meteorological Centre said the smog would stretch from Xian, home to the world-famous Terracotta Warriors, across part of central China, through Beijing and up into Shenyang and Harbin in the frigid northeast.

The air pollution would begin rolling in from about Saturday evening and last until Tuesday, with visibility in the worst affected areas such as Beijing likely to fall to less than 1 km (0.6 mile), it said.

The pollution index would probably exceed 500 in Beijing and parts of Hebei province, which surrounds the capital, it said. Residents are encouraged to remain indoors at levels higher than 300, according to government guidelines.

Beijing's second red alert comes after a landmark climate agreement was reached in Paris earlier this month, setting a course to move away from a fossil fuel-driven economy within decades in a bid to arrest global warming.

A red alert is triggered when the government believes air quality will surpass a level of 200 on an air quality index that measures various pollutants for at least three days. The U.S. government deems a level of more than 200 "very unhealthy".

In Beijing, a red alert means around half the vehicles are removed from the roads with an odd-even license plate system enforced. Schools are recommended to close and outdoor construction is banned.

"I'm very concerned about the pollution, I think the government needs to put more effort into solving this," said Cheng Xianke, a 34-year-old Beijing software developer.

The Beijing environment bureau said the red alert would last from 7 a.m. Saturday to midnight on Tuesday. The official Xinhua news agency said the smog would be worse than last week.

"Parts of north China will see the worst smog so far this year from Saturday," it said, citing the National Meteorological Centre.

Xinhua put blame for the smog on the over-reliance of much of northern China on coal for its energy needs and the heavy industries surrounding cities.

"From a long-term perspective, the improvement in air quality cannot just rely on temporary production suspensions or limitations for certain companies," it said.

"Fundamentally it needs to come from an adjustment in industry and energy structure, as cutting emissions from the source is the permanent solution."

Beijing is not the only city to have a colored alert system, and the restrictions rolled out in the most severe cases are broadly similar.

Hebei's environment protection bureau said it was issuing an orange alert, the second-highest, starting from Friday. Schools will not close and there will be no vehicle restrictions but it recommends no outdoor activities and that people use public transport.

Hebei's Baoding city has already begun enforcing rules even stricter than a red alert, an official surnamed Liu at the city's environment protection bureau told Reuters, including a December-long enforcement of odd-even license plate restrictions and total ban on outdoor construction for the month.

After decades of unbridled economic growth, China's leadership has vowed to crack down on severe levels of air, water and soil pollution, including the heavy smog that often blankets major cities.

City residents have previously criticized authorities for being too slow to issue red alerts for heavy smog.

City residents have previously criticized authorities for being too slow to issue red alerts for heavy smog. 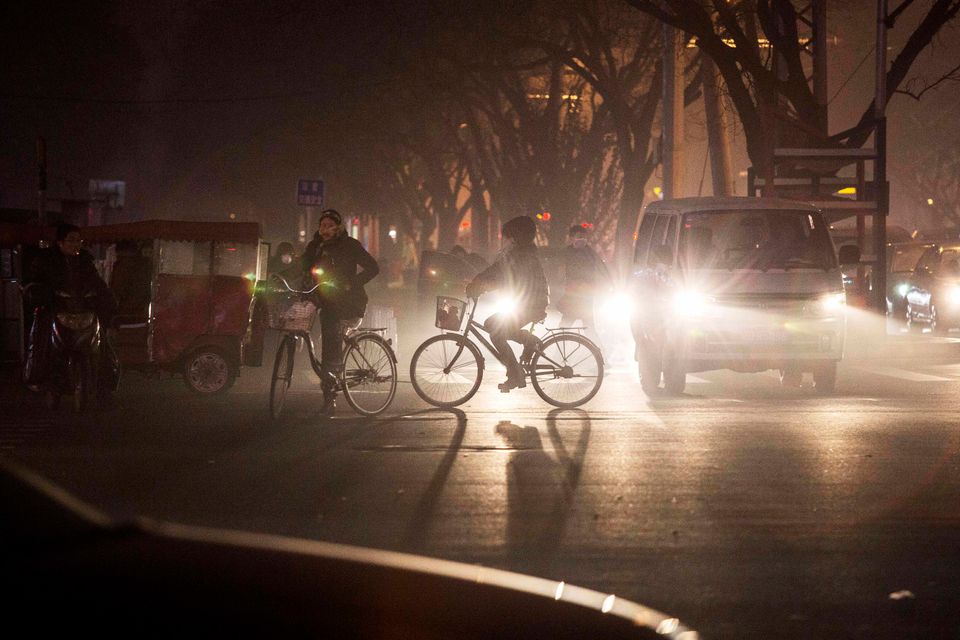