The Chinese recently marked their New Year. 2013 is the year of the Snake.

"Residents of Beijing braved freezing temperatures to let off brightly colored fireworks, with clouds of smoke in the air, red wrappings from firecrackers covering streets and explosions rattling windows.A plea by the government to set off fewer fireworks to help deal with Beijing's notorious air pollution seemed to fall on deaf ears.

'Every year we set off fireworks and this year will be no different,' said Lao Guo, 45, a convenience store worker. 'People won't not set them off because of pollution. It's the custom.'

Firecrackers are believed to scare off evil spirits and entice the god of wealth to people's doorsteps once New Year's Day arrives." -- via Reuters

The god of wealth might bring bucks to doorsteps... and a blazing fireworks display may add to the festivities of the day, but those noxious clouds of smoke snaking around Beijing cannot stave off China's legacy that accounts for nearly half of global coal consumption.

"Cheap coal power has been a boon to China, an engine pulling millions and millions of people out of poverty. But it has also brought nightmarish local pollution problems -- which are not remaining local -- and it of course threatens to tip the climate into chaos, which will do more damage to the Chinese people, over the long term, than the last decade of growth has done good. It is, as China expert James Fallows says, an 'environmental emergency' that threatens to stop China from ever catching up to the developed world." -- David Roberts, Grist 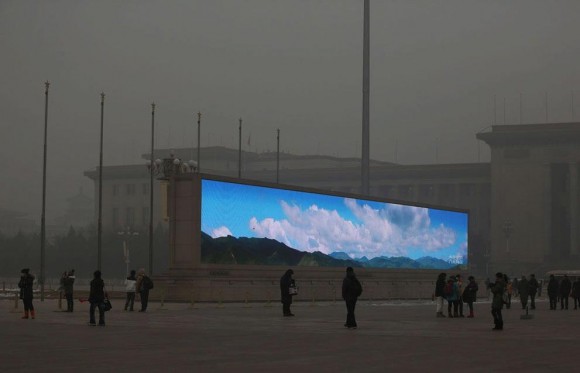 China's dangerous and persistent air pollution problem is described as ''airpocalypse' smog. As these images show, China's pollution troubles are clearly visible. The mothers, fathers and their babies have nowhere to hide from all the coal ash and soot pollution. The record levels of air pollution leaves Chinese citizens asking if they're paying for economic growth with their health.

One might think Beijing is a looooong way from our shores -- out of sight, out of mind. But, China's off-the-charts concentrations of air pollution doesn't just stay within China's borders. Air pollution is imported all over the world by the mighty wind. Carbon dioxide and fine particulate matter don't care about boundaries; they strike their prey -- leaving asthma, lung disease and cancer.

Let's not forget it was only 60 years ago that Pittsburgh, Pa., had to keep its lights on during the day because no sunlight could penetrate the thick soupy smog that engulfed the city like it now surrounds Beijing. One only has to view these images of life before the Clean Air Act to see the choke hold of inaction.

We need to continue to reduce air pollution if we plan to lessen our contribution to climate change. Which is why we must continue to value and strengthen the Clean Air Act. President Obama highlighted the urgency of addressing climate change as a priority in his second term. Join us in asking the president to map out a plan for action and tackle climate change's deadly venom.

Photo via An Inconvenient Truth