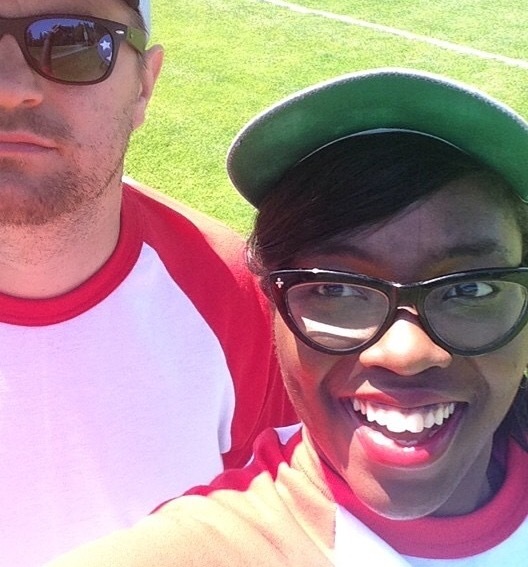 A man on Twitter once said, 'I have a dream... that I will live in a world where white people care about black people before Jon Stewart tells them to.' That man was Clint Smith, poet, activist and PhD candidate at Harvard University.

This is my current situation. The white people in my life just don't care. My fiancé is white and he doesn't want to hear it anymore. He told me he's tired and asked me if we have to discuss race every single day. My best friends are all white, and they have been radio silent for the past year on every single shooting of an unarmed black man, on every utterance of #BlackLivesMatter, and even recently, within the last two weeks, when racial identity and relations in America have seemed to boil over.

But what exactly do I expect? These are the same people I spent my adolescence with pretending not to be black. Hiding my natural hair under weaves and braids not to protect my coif, but to protect me from what I assumed would be ridicule and rejection in opposition to the European beauty standards my friends all replicated.

I grew up in a predominantly white suburb and at times, as the only black girl in suburbia. I wore my "token black girl" status as a badge of honor. People in my small town of Monroe, Conn. were used to me and despite being visibly black, I was often referred to as an "Oreo" and told I "sounded white."

For 20-plus years, I was comfortable with this position. Until just recently, when I left my comfort zone to move to a place that, unbeknownst to me prior to living here, is often referred to as "Whitelandia," or "Whitetopia."

I came to the Pacific Northwest -- Portland, Oregon. When I first moved to southwest Portland, it was nearly three weeks before I saw -- let alone encountered -- another African-American. I began to fear whether I would ever see anyone who looked like me again. Although I grew up around white people, this was something totally different. Because I had always been able to assimilate with my white friends I never imagined the way I looked would be a factor in how people interacted with me. People I met were never overtly racist, but they seemed strangely uncomfortable and I honestly couldn't figure out why. Never before in my life had I been so hyper-aware of my blackness. Before moving here, I was familiar with several local cities that had beautifully diverse populations outside of my own hometown. I had never seen a metro area that was so overwhelmingly white.

So, here I am. In a place where I had never really specifically defined my racial identity, where I felt as though I was having it defined for me. Despite my previous experiences, I find myself faced with just how difficult it is to adjust to being black within a white space all over again.

In the Pacific Northwest, I am merely a few hours away from Spokane, where the now-infamous Rachel Dolezal was able to fool the world into thinking she had what it takes to easily be a black woman.

Just one look at any comments section on Facebook will tell you that white people were both fascinated and intrigued while being simultaneously baffled and flummoxed as to why on earth a white person in this country would possibly want to be black. Some even went as far as accusing her of mental illness.

Talk show hosts, professionals and Twitter spent four days straight examining exactly what it takes to be black in America based on the observations of one single white woman. For what seemed like the first time ever, the mainstream media was spending their 24 hour news coverage debating the complexities of life in the U.S. as a black woman who just happened to be white.

Many, including myself, felt outrage and offense that this lady from the most privileged demographic in today's world would attempt to adapt our struggle. Not because this struggle is coveted, but because her definition of blackness was limited to a blotchy spray tan, crooked weaves and some African studies classes. Others, even black people, didn't see what the big deal was, and thought what she was doing was harmless.

For me, it was painful to watch this woman run around and present herself in a costume of what she interpreted as "black," which she could slip on and off like a nice pair of Jordan's. She not only infiltrated safe spaces for African Americans, but prevented already marginalized black women from gaining opportunities like a full scholarship to Howard University.

This was all under the guise of an oppression she has never and will never endure. Dolezal stole countless hours of precious time from platforms created to give a voice to legitimate black women with real experiences who will now continue to go unheard.

Dolezal appeared a week after we watched an officer manhandle a 14-year-old girl in Mckinney, Texas, and just days before the atrocity in Charleston, S.C.

Last month, a white male walked into a black church on a self-proclaimed mission to kill black people. Rachel Dolezal will never know what this feels like. Innocent black people are being murdered and brutalized while black people are being forced to relive these events repeatedly through our insatiable consumption of news coverage and social media.

I am so exhausted from seeing these non-stop images of lifeless black bodies. I am so tired of seeing black girls and women being pushed around by those expected to protect and serve. I am sick of making RIP hashtags. All of these things are a painful reminder of the consistent dehumanization we face as a people in this country.

I myself was guilty for many years of a kind of "don't ask don't tell" mentality when it came to my culture and a regular subscription to white supremacy. However, when I moved to the Pacific Northwest and my race began to define who I was to other people, I embraced letting it define who I am to myself.

Being black is a beautiful burden. It is not something you can just wash off. So, when my fiancé says he is tired of talking about race, I must remind him that so are we.

I am a Freelance writer.