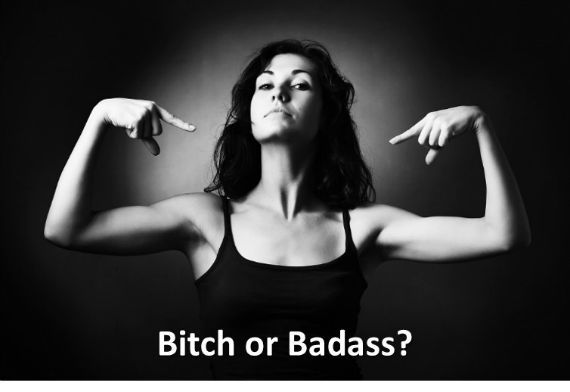 I know, this can be confusing, but stay with me here...

While everyone who completed 4th grade knows that b*tch is the technical term for a female dog, everyone who has made it through middle school knows it has a very different societal connotation. Though there are many variations, Merriam-Webster defines "b*tch" as "a malicious, spiteful or overbearing woman" or "something that is extremely difficult, objectionable or unpleasant."

Badass is very different, defined by the ultimate word authority -- the Oxford Dictionary -- as a "tough, uncompromising, intimidating" or a "formidably impressive person." Badasses stand up to oppression, survive against the odds, take care of their families and believe in their own power. They are slow and steady. They hang in there. But when pushed, they fight with all they've got for what they believe in.

And being a b*tch doesn't make you a badass.

I recently watched as a woman I know, who admits to being generally negative and a chronic complainer, refused to sign in to the pool at a four-star hotel. There was no charge, no particular hassle in doing so -- just jot down your name and room number. The young woman behind the desk asked politely and was simply trying to do her job.

Commenting on her refusal to sign in, the woman later told me, "I'm a badass."

Nope. Being a b*tch doesn't make you a badass.

Staying up all night with a sick child and going to work the next day makes you a badass. Caring for aging parents, being kind when you have nothing left the give and dragging your exhausted self to the gym makes you a badass. Refusing to compromise your integrity, standing up for the things you believe in, striving for your goals even when it is really, really hard -- that makes you a badass. Trying to make the world a better place? That's badass.

Last year, I attended a three-day conference hosted by the One Foundation focused on issues affecting women and girls. During the afternoon of day two, a young woman took the stage wearing a wig, her face obscured by oversized sunglasses. In a quiet, clear and unwavering voice, she told the story of her capture, along with hundreds of her classmates, from a school in northern Nigeria by the terrorist group Boko Haram. The girls were taken at gunpoint and loaded into trucks. After some time and in the pitch black of night, this 16-year-old jumped from the back of the moving truck and rolled down the embankment into the woods. "I assumed I would die," she said. "But I wanted my parents to at least have my body rather than wonder what happened to me." She survived to tell her story and ask the world to help find her friends. She is 16 and she is badass.

Being rude to a 24-year-old girl for no reason other than your persnicketiness? That doesn't make you a badass, it just makes you a b*tch.