There was an overwhelming torrent of news last week. The two Supreme Court decisions and the response to the tragic church shooting in South Carolina are among the most indelible events of our time and all three will be memorialized in history books and discussed for decades to come.

Last week, a CEO friend (Jen Medbery of Kickboard) asked me a series of great questions that I've been thinking about these last few days:

How do I address current events within my own company? Do I bring it up at all? How do I invite dialog with my employees? How are other companies talking about this, especially ones that struggle to build a diverse team, and certainly don't have [the appropriate training and] practice discussing very sensitive topics like prejudice and institutional racism?

In the wake of Ferguson, Baltimore, South Carolina, ground-breaking SCOTUS decisions and much more, I imagine she is not the only business leader struggling with these questions and so I thought I would share a few thoughts to address them.

Context: Facing History and Ourselves

Before addressing these questions, I have to provide a little context. In addition to my venture capital and teaching activities, I co-chair the board of trustees at Facing History and Ourselves, an educational non-profit that trains educators how to teach pivotal moments in history (e.g., the Holocaust, Civil Rights, Apartheid) and connect these histories to the lives of their students in order to improve civic discourse and create a more humane society. The organization provides teachers with valuable pedagogical resources, such as how to teach To Kill a Mockingbird and talk about the Little Rock Nine. They also have a blog that provides pointers on topics like how to talk about race with your kids. I took a Civil Rights history trip with my family last year using an itinerary that was modeled after a series of board trips that the organization has led. So, my advice to business leaders will draw on Facing History's nearly 40 years of work with teachers and adolescents.

Careful, Your Politics Are Showing

More than ever, business leaders are engaging in current events. They are natural leaders and role models and thus their opinions are sought after. I have been an advocate of this for years, particularly having innovation community leaders engage in civic work, and so have been thrilled to see business leaders take public stances and lead public discourse. Many CEOs do this by being active on Twitter and Facebook, playing the role of mini-celebrities or media personalities. Business leaders are cautiously engaging in this new role as they don't want to seem overly political and spark controversies, but when some current events - such as this week's - loom so large in the minds of their employees, business partners and customers, they naturally feel compelled to address them.

Business leaders see many of their colleagues who run the country's most admired companies take corporate action or make statements in response to current events. After the South Carolina shooting, Amazon, eBay and WalMart loudly announced they would stop selling the Confederate Flag. Shortly afterwards, Apple announced that they would ban all apps that contain the Confederate Flag. Tim Cook tweeted the following: 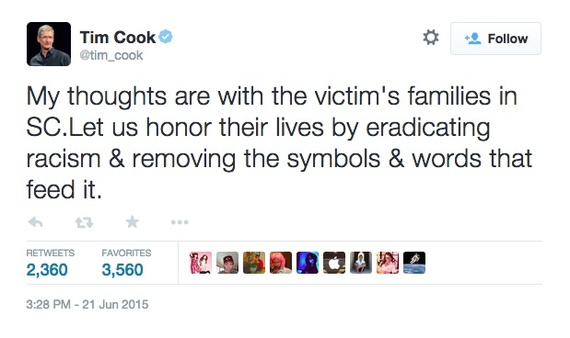 When the Indiana state legislature passed the controversial Religious Freedom Restoration Act last March, there was an uproar in the business community. Some tech CEOs, such as SalesForce.com's Marc Benioff and Angie's List's Bill Oesterle spoke out publicly and declared that they would be reducing their investment in the state. Others communicated more privately to their employees. One of the CEOs I admire greatly, Kronos' Aron Ain, sent out an email to his entire 4200 person staff stating plainly,

We fully support freedom of religious beliefs. At the same time, Kronos will always treat every employee and every customer in a welcoming, respectful and understanding manner, regardless of where they come from, how they worship, or who they love.

Suggested Strategies to Approach the Issue

Tim Cook and Aron Ain run large companies with billions in sales, thousands of employees and high profiles. How should other business leaders, less heralded, approach these events, particularly (as Jen cited) issues of racism in a diverse workforce environment? I suggest using the following framework as a starting point, inspired by decades of research that Facing History has done to help teachers address these issues in the classroom (known as the "Scope and Sequence" framework). In effect, it puts the business leader in the role of teacher and educator - a natural role that they are finding themselves playing.

Begin with identity - it's ok to make it personal. Many of these issues are centered in your personal identity and that of your staff. Therefore, don't be afraid to speak about your personal history and how it shaped your personal values and views. Identity is the lens through which everyone views these issues and so you shouldn't shy away from putting it out there. One of our portfolio company CEOs, who is openly gay, joked with me the other day with pride that his executive team looks like the cast from Glee. If you can share your childhood stories of what your identity means to you and how it affected your upbringing and values, the authenticity and honesty can be very powerful and serve as a model for behavior throughout the company. Readers of my blog know that my father's experience as a Holocaust survivor, war refugee and ultimately American immigrant have had a profound impact on me, inspiring my civic work in social justice.

Establish ground rules that create a safe place for discussion. To start off, it is critical to make sure you create an open, safe place for discussion where mutual respect and trust are central principles. In all company communications and forums, make sure you create an environment where your staff is comfortable with an open dialog where everyone is allowed to voice their point of view - not speeches and lectures where dictates are being passed down. Perhaps kick off your next all hands meeting with a few personal perspectives about the latest news. Discuss it with your senior staff and encourage them to discuss it with their staffs. The classroom analogy is a useful one. When teachers teach the Facing History curriculum, they are instructed to rearrange the students' desks into a circle rather than a classic classroom configuration to signal the open forum.

Know the history. Every one of these events has a historical context. The South Carolina church shooting is inextricably linked to the 1963 bombing of a church in Birmingham, Alabama, which is inextricably linked to the Civil Rights movement, which is linked to centuries of slavery and institutional racism. The Supreme Court gay marriage decision is linked to the landmark case in Massachusetts in 2004, which was linked to a broader LGBT rights movement, which is linked to the Civil Rights movement and so on. Conversations about these topics are richer when you can bring in the full historical context. I recognize this puts a burden on business leaders to be amateur historians. That isn't the point. The point is that history informs and contextualizes the current events. Historical case studies also make it easier to reflect on current events in a less charged fashion. Business leaders can use the history as a tool to educate and frame these sensitive issues.

Admit that you don't know everything. CEOs have a tendency to want to show mastery and confidence in the workplace. For these situations, vulnerability may be an even more important leadership tool. My friend, Katie Burke, Hubspot's head of talent and culture, did a post related to diversity and then set up follow-up sessions to solicit ideas from employees on how to talk about diversity and current events. By signalling this openness, you show it's not just about pushing your opinion or agenda, but connecting to a broader cause alongside your staff.

Choosing to participate. In the end, employees will want to go beyond dialog. They will want to take actions - and see your company take actions - that reinforce the values that you espouse. Maybe those actions link to the events, as Aron Ain and Tim Cook did. But those actions may not be relevant for most companies. Maybe the actions are internal ones - such as making sure your marketing materials reflect a diverse and inclusive work environment. Try other small gestures, such as sponsoring a non-profit you admire, attending a service day (e.g., TUGG gives back), or hosting a civic leader, politician, or candidate for public office and use the forum as an opportunity to hold a discourse on civic issues. If you don't provide a forum for actions to back up the words, you run the risk of being accused of being someone who speaks loudly but carries no stick.

Get outside help. There are experts in all of these fields - local professors, church and civic leaders and many non-profits with amazing resources. Consider hosting a brown bag lunch with a local historian or expert. Consider creating a book club and assigning a few of the classics (To Kill a Mockingbird, Uncle Tom's Cabin) and then hosting a discussion forum. Be willing to explore the issues intellectually and openly. Even consider creating a company committee to lead in this area, just as you would for any internal project that has cultural importance. In the end, the outcomes themselves may be less critical than simply the intentions and the dialog itself.

What I have found in my decades of work with Facing History is that people crave dialog on these topics. CEOs are making a mistake if they don't create a work environment that encourages it. And if they remain silent, they are sending a message that these topics are not important. Further, they are missing the opportunity to create community and loyalty, never mind speak out and provide leadership on matters that are important to them. In the end, the "leader" portion of "business leader" must receive equal weight and attention. Times like these require it.