Perhaps no athlete in the modern era has endured more unwarranted ugliness than MMA fighter Fallon Fox. Her history as a transgender woman has opened her up to abuse and made her Public Enemy No. 1 to crowds. Her latest opponent, Tamikka Brents, is no exception. In a recent interview Brents stated, "It just pisses me off that Women's MMA has fought to get away from being seen as a side show. She's using that to further her career while setting Women's MMA back in the process."

While this might seem like garden-variety transphobia, Brents' comments represent a completely self-unaware form of hypocrisy. You see, Brents has proclaimed herself an LGBT ally and draped herself in the rainbow flag when entering the MMA octagon: 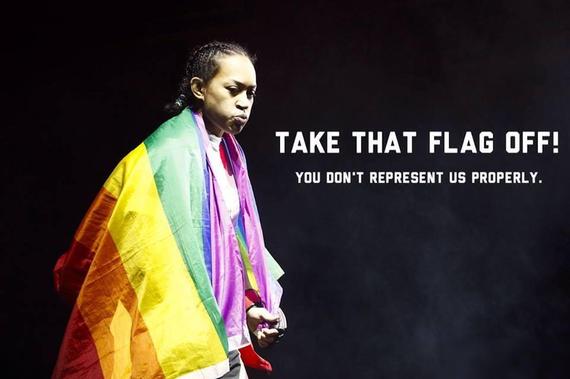 Last time I checked, however, you're not my ally if you're calling me and all the people like me freaks.

Which brings me to my point: Just because you call yourself an "ally" doesn't make you one. Unfortunately, there are innumerable ways to be a bad one. This is even true of people at large LGBT organizations who really should know better; we see the same mistakes being made over and over again.

Even more pervasive are people who think they're open-minded and tolerant but, in truth, hold views that keep transgender people firmly in second-class-citizen status. I can't count how many times I have seen the following:

After all these bad examples, however, the question remains: What makes a good ally? In all the examples above, people take these positions based on a lack of understanding of the lived experiences of so many transgender people: of how hard it is to find work, or medically necessary health care, or accepting partners, or athletic activities where we're welcomed, or safe spaces; how hard it is to simply not be othered.

The starting point to being a great ally is listening -- and not just listening but hearing what we are saying.

When my partner and I watched the backstory of Sophia Bursett (played by Laverne Cox) on Orange Is the New Black, we were blown away by how real some parts of it felt. Sophia's spouse Crystal even says something in the episode that my partner said to me just a few years ago, word for word: "Where would I go? You're my family."

I contacted Sian Heder, who wrote the screenplay for that episode, "Lesbian Request Denied," and asked her how she had gotten these characters so right when most screenplays get it so wrong. She replied:

I worked really hard to get that episode/character right and felt a huge responsibility to speak for the trans community. I interviewed several MtF [male-to-female] people (one who was an ex-SWAT team member and one who was captain of her fire-house), and contacted the leader of a support group in Los Angeles. I was really interested in Crystal's psychology, why she stayed, what that was like for her.

Being a good ally begins with listening and actually hearing what transgender people have to say about their lives. When people actually do listen, the results can be remarkable. Many viewers of Orange Is the New Black had their first positive exposure to a female transgender character via this episode. It also helped launch Laverne Cox as an actress, advocate, and national figure.

All this because an ally took the time to really listen, hear, and empathize.